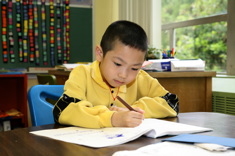 If you have a new English language learner in your class who is not speaking, don’t worry. According to language researcher Stephen Krashen, most new learners of English will go through a “silent period,” where they are unwilling or unable to communicate orally, even though they understand much of what is going on around them. They are not comfortable speaking in the new language, because it is difficult for them to express their thoughts orally. Children in this silent period should not be forced to speak before they are ready. They need time to listen to others talk, digest what they hear, and observe their fellow classmates’ interactions with each other. Because they are silent, it doesn’t mean they are not learning the language.

It is easy to understand the concept of the “silent period” if you look at the language learning of babies. Babies in any culture can understand far more than they express. In a class of children who speak many languages other than English at home, you will often have children in the “silent period”-they are learning many English words, ideas, and idioms, but they are not comfortable speaking as part of the group or individually.

The length of the silent period can vary greatly for students in classrooms from a few days to a year, simply because their experience with language, their personality, and their emotions around learning a new language can vary so greatly. Because the child is silent in the dominant classroom language, it can be hard to know where they are in acquiring English.

When conferring with English Language Learners in our kindergarten classroom, we use these strategies to communicate verbally and nonverbally:

We ask questions that allow the child to respond with nods of “yes” or “no”.These prompts include guesses of what the child is drawing or about the marks they are making on the page (i.e., “Is that your mother?” ; “Is this writing in Russian? ” “In English?”).

We accept as response facial expressions like smiles.Â Nonverbal cues from children in conferences include establishing eye contact, flipping through pages of writing for us, pointing to specific pictures or letters, or grabbing our hands to touch the page or help the child draw a letter.

We share a word or two in the child’s language.Â This might be the Spanish word for “butterfly” if we are studying butterflies in science, or the Russian word for “mother” if we think the child has drawn a picture of their mother. Because there are so many different first languages in our classroom, we rely on bi-lingual dictionaries and suggestions from native language speakers. If the alphabet is the same as the English alphabet, simple web translators can be helpful – “Babblefish” (www.babblefish.com) and “Free Translation” (www.freetranslation.com). These are only useful for basic literal translations, but children appreciate the attempt. (These websites will also translate several sentences into another written language such as Vietnamese, Russian or Chinese, which can be helpful for brief notes to parents.)

Many children draw pictures of their family, and we ask for details.Â We point to each figure and ask if this is the mother, or sister, or brother, and if they nod, we ask the name of the family member. The first words of children in the silent period are often related to family.

We watch the child on the playground.Â If there is no verbal communication in the classroom, there are often early words around play.

We ask children to mime the action of what they are trying to convey using their bodies to communicate.

We ask the child to draw a picture of what they are trying to tell us.

The silent period at any age can last many months-even children who understand a tremendous number of words and concepts are overwhelmed at the thought of trying to speak in the language. But if we convey through our verbal and nonverbal cues that we want to communicate and trust the communication will come, children will eventually speak. Classrooms that are engaging, nonthreatening, and honor a child’s native language and culture can help each student’s motivation, risk-taking, and ability to learn.

Finding ways for learners to communicate what they know from life and the books they read has been a crucial part of Andie Cunningham’s work within literacy. Andie is a literacy coach in Portland, Oregon. She is also National Courage and Renewal facilitator, and consistently brings Courage to Teach to the professionals with whom she works.

The Art of Listening in Writing Conferences with English Language Learners

Ruth Shagoury and Andie Cunningham share tips for mastering the art of listening in conferences with English language learners. 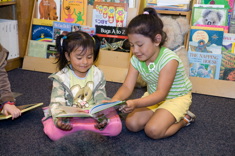 Ruth Shagoury lists a variety of books with languages and scripts far beyond the ABCs to connect school and home languages. 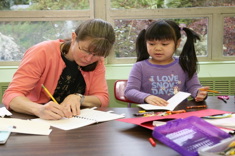 Text selection for English language learners poses special challenges. Clare Landrigan and Tammy Mulligan explain how the criteria for “just-right books” are different for ELLs, and provide practical examples of how teachers use these principles of book selection in their classrooms. 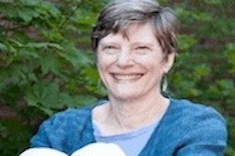 In this short video, Ruth Shagoury gives two pieces of advice to teachers who feel awkward as they are trying to communicate with young English language learners. 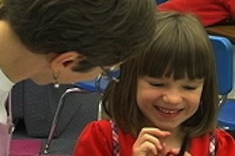 Conferring with a Child in the “Silent Period”

Larisa is a six-year-old who speaks Russian at home, and is in the “silent period” in school. In this conference, Ruth Shagoury demonstrates different strategies for eliciting responses from Larisa. 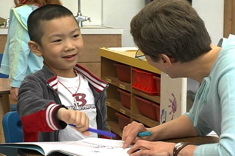 Eddie is a six-year-old student who speaks Cantonese as his first language. In this conference with Ruth Shagoury, little English is spoken, and yet there is much communication through gestures and shared history.