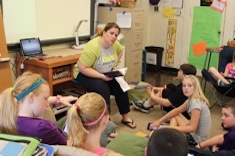 Many things are unpredictable each day in our classroom, but one thing my students can count on is that they will be read to every single day. I read aloud for many reasons, but one of the most important is to work through with students what it means to be a kind, generous, and thoughtful community. It is not always easy work. But no matter what challenges come up as students find themselves in conflict, vulnerable, or feeling alone, there is a usually a book that can address the issues in safe ways.

I often look for books to connect us and give us a place to talk about choices. In Parker Palmer’s book The Courage to Teach, he talks about the concept of “third things.” Essentially, he is referring to using a third object to take the onus off of ourselves when we are discussing challenging topics. I often use the books we have shared in our classroom in this way.

For example, when we had some students unintentionally leaving others out in the classroom, I shared the beautiful picture book The Invisible Boy by Trudy Ludwig. In it Brian struggles to find his place. He is shy and often overlooked or ignored by his classmates. It takes another boy, Justin, moving in to notice Brian and help him grow. I read it to my students and they were incensed for Brian and angry with his classmates. I then asked them to reflect on whether they had ignored a classmate or made them feel like Brian did. Many couldn’t imagine they would ever behave like that. I didn’t have to correct them; Brian was now someone we knew, and his story was part of our classroom language.

When a classmate came in from lunch recess the following day quiet and withdrawn, I had a feeling I knew what was going on. She shared that the girls in her group were leaving her out and she didn’t know what to do. I found her friends out by the water fountain in our hall and asked if I could talk to them. They happily came by my side. In a quiet voice I asked if they remembered the story of Brian and Justin we had just shared the day before. One enthusiastically nodded at me, and the other looked a bit wary, already realizing where this conversation was headed. I reminded them of the scene in the book where Brian is at lunch and everyone is talking about a birthday party he hasn’t been invited to and how that had made them feel when we read it. They both looked at me and nodded again. I then asked if they felt like they had treated Cody at lunch recess the way Brian had been treated in the book. I explained that often we hurt others even when we don’t mean to, but the hurt is there just the same, just like in The Invisible Boy and just like their friend in the classroom right then. The girls shot like darts to go find their friend and make amends.

There are many books we can share with our students to open up the opportunity for conversation. Instead of saying to our kids directly that they are being mean, or they need to speak up, we can remind them of a book we’ve read, a character we’ve met. After talking about the concept abstractly, we can begin to bring it back to them. It gives them a chance to see their actions through another lens. A plethora of books can be used in this vein, but as a starting point, I’ve included some of my favorites below. Enjoy meeting these books with your students and beginning the discussion. When the conversation happens on a regular basis, I think it brings the class together as a family and provides the opportunity to build understanding and self-reflection. I truly believe this is some of the most important teaching I do in the entire school year.

Bill the Boy Wonder: The Secret Co-Creator of Batman by Marc Tyler Nobleman

We use this book to reflect on how we work in groups. Upon learning that Bob Kane took all of the credit for the creation of Batman, when in actuality Bill Finger was a large part of the creation, we talk about how we work in groups. I ask them to reflect on one simple thought when they are in groups: Am I being a Bill or a Bob? I knew that it was sinking in when a teacher on my team came to ask me who Bill and Bob were and said that the groups in her class were working better than ever.

I use this work from Matt De La Peña to talk about having a positive attitude. Every year I have more than one student who is constantly on the outlook for what has been done wrong. The boy in the book, CJ, tends to have a more negative outlook. His grandmother has the opposite outlook on life and gives everyday events a positive spin. Depending on my students, I predict that I will read this one early in our school year so that CJ can teach us the lesson that our perspective on life affects how we see things.

This is an older title, but one that I just recently added to my collection. Courage is a simple book that looks at all the different ways we use courage on a daily basis (stepping up to bat, jumping off a diving board, standing up to your friends). I love that it gives us a jumping-off point to have the conversation in class about the times that we need courage in our own lives.

Fish in a Tree by Lynda Mullaly Hunt

This is a chapter book I read aloud to my class last year. It would pair very well with Courage. Ally struggles in school. She has undiagnosed dyslexia. I use this book to talk about our strengths and how we can stand up for our friends, and to teach lessons on how the words we use can affect others.

I would probably not read the entire text of this graphic novel to a class, but I would reference key plot elements in a book talk. It isn’t that it would be a bad read aloud, but it is a book I think most students will devour on their own. I love that one of the storylines is about two girls growing apart as friends. Neither one has done anything especially horrible; it is just that as they have gotten older, their interests have changed and they don’t enjoy spending time together as they once did. This is a common problem in fifth grade, and I think it would be great to share this storyline with the class early in the year so that when it happens during our year together, I can point to this title and say, “Remember how we learned in Roller Girl that sometimes friends drift apart and that is okay?” Then we can continue that conversation without blaming the other friend but using it as a time to grow and change.

I have found inroads into many issues we might have in the classroom through the literature we have shared in our year together. It is a way to talk about a problem without blaming my student or putting any heavy issues on them. When we look at a character we know, we can discuss how they handled a situation. It is then that I can start to circle back to my student and whatever they are dealing with, and see if that lesson from the book could help them. The best part is when they begin to realize how to do this on their own. Last year I overheard some boys coming into the playground from recess. The three were walking ahead of me and one said, “Well, I had to tell Josh that I was wrong when I yelled at him over the kickball game.”

Another boy replied, “Why?”

The first boy said, “I don’t want to be like those kids in Bluebird [by Bob Staake] and run away when I’m wrong. That isn’t cool.”

And my heart rejoiced. 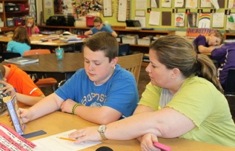 The First Days of Reading and Writing Workshops

Katherine Sokolowski explains how she spends her time during the first days of literacy workshops in her fifth-grade classroom. 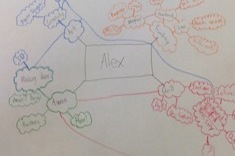 Katherine Sokolowski finds the work ethic of her fifth-grade students is flagging by spring, so she helps them reflect upon and improve their performance.

Katherine Sokolowski advises teachers to ditch the search for the perfect management system, and instead focus on building relationships early in the school year. 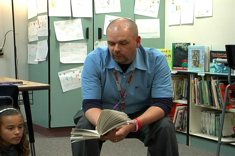 Tony Keefer demonstrates how he makes his read-alouds interactive, and explains why he selected Percy Jackson to use with this group of fourth graders. 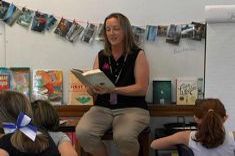 In this video from a fourth-grade classroom, Gi Reed reads aloud Small as an Elephant by Jennifer Richard Jacobson. Gi continually checks in with her students, making sure they are visualizing, noticing new vocabulary, and making connections to earlier incidents in the texts—all without breaking the flow of the story. 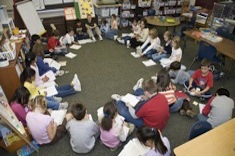 Franki Sibberson previews a read aloud with her grades 3 and 4 students.