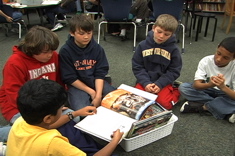 We hear so much about matching students to nonfiction texts based on their needs and interests. Often the lens is very broad (“tweens will like this book”) or very narrow, focusing in on individual students with quirky tastes. I have taught 4th grade for many years. I’ve learned that my teaching becomes more efficient and effective when I consider the types of readers who emerge every year.

For example, I’ve learned there will be a number of students who enjoy texts that blend fiction and nonfiction — not the entire class, but almost certainly more than one child. I can expect many students will need and enjoy lots of comprehension support from illustrations. Here are some categories of readers I often see in the intermediate grades, as well as my current favorite nonfiction texts to share with them in conferences and small groups.

You Are the First Kid on Mars

by Patrick O’Brien tells the reader what would happen and what they would do if they were the first kid on Mars, beginning with a space elevator up to a space station, then a rocket trip to Mars. The text includes all the kinds of scientific experiments that you’d help with on Mars, a walk on the surface, and the trip back home.

The text of Redwoods

by Jason Chin has very straightforward and factual information about these ancient trees. What makes this book unique is that the main character is reading the same book the reader is, and the illustrations tell the story of what the main character imagines as he reads. As the character rides on the subway reading about the age of redwoods, dinosaurs peek in the subway windows and the character’s seatmates are Roman soldiers. When the character walks up the steps of the subway station, he finds himself in a redwood forest. Through this character, Chin shows a reader how to become imaginatively involved in nonfiction!

Readers Who Need Several Layers of Text and Picture Support

) offer multiple supports for readers. His photographs are stunningly beautiful, and invite the reader to do a first read simply of the pictures. On every page of text, one sentence is highlighted in a larger contrasting font — the main idea. A child could read only one sentence per page of these books and get the big ideas. In addition to the main text, there is also interesting information in every caption.

) by Frank Serafini. These feature a close-up photograph of a portion of a larger photo, and invite the reader to guess what it is. On the following page, the whole photo is revealed and the answer is given both as a word or phrase and in a longer paragraph of text.

Readers Looking for Nonfiction in Poetry

African Acrostics: A Word in Edgeways

by Avis Harley has gorgeous photographs of African animals, each accompanied by an acrostic poem. In the back of the book there is more information about the acrostic poetry form. In this book, there are traditional acrostics, double acrostics, cross acrostics, and even a concrete acrostic. Also included in the back matter is more information about each African animal featured in the book.
The Cuckoo’s Haiku: and Other Birding Poems

by Michael J. Rosen is another nonfiction poetry book with many layers of information. This book is organized by season, with 5-7 birds featured in each season. The layout of the book is like a field notebook, with watercolors of the bird and its habitat, “handwritten” notes about the bird, and a haiku about the bird. There’s more information about each bird in the back of the book.

Picture book biographies have become much more sophisticated in their use of smaller chunks of accessible text and illustrations that add to the story of the famous person’s life.

You Never Heard of Sandy Koufax?!

by Jonah Winter and Andre’ Carrilho is told from the incredulous point of view of one of Koufax’s Dodger teammates. The voice is conversational, and filled with awe and admiration for this great Jewish pitcher.

by Dan Yaccarino traces the life of Cousteau from childhood through his entire life. Yaccarino’s stylized illustrations and the large font and short chunks of text will make this book accessible to readers of many levels. Quotes from Cousteau are scattered throughout the text.

So much has been written about George Washington, but Big George: How a Shy Boy Became President Washington

(Anne Rockwell) is different in its focus on Washington’s youth and early development. The illustrations by Matt Phelan are engaging, and the text is clearly written. 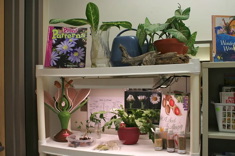 Teachers can accomplish plenty in a minute if they want to add more nonfiction to their day. Learn how from Andrea Smith. 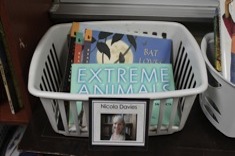 Franki Sibberson realizes she needs to highlight nonfiction authors in new ways in her classroom library. 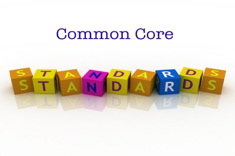 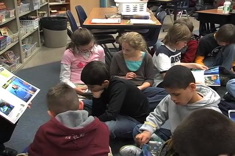 In this whole-class lesson, 5th grade teacher Karen Terlecky and her students consider how main ideas work in nonfiction texts. 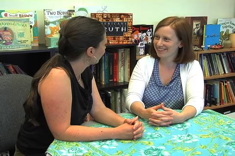 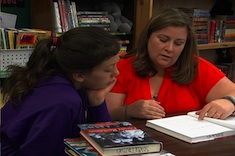