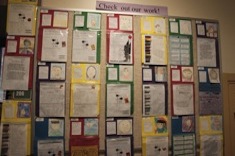 On our first day back after spring break, I asked my students to think about word work as a math problem. How are the two similar? Puzzled looks were all around, and finally I got these responses:

Brandon: Words are like the commutative property: no matter what order you use them in, they make a sentence. Could be a question though.

I added, “If we understand the structure of text, then perhaps our mathematical equation would be words + sentences + paragraph = meaning.”

What I realized over spring break was that although my students were gathering words in their notebooks, these new words weren’t appearing in their writing. In addition, I was not hearing any buzz about words in my classroom. Word work wasn’t authentic for them, and I knew it “wasn’t a windows onto text’s deeper meanings.”

My goal for word work is consistent from year to year: to scaffold vocabulary instruction so that students understand it is not about learning words in isolation, but understanding the meaning of the words. This group of students was struggling, and I needed to make a shift in not only my thinking but my lesson plans.

Our word study routine involved a quick minilesson, conversations in which I annotated new ideas, and practice. This routine was not working for this group of students. They needed to be more actively involved and take ownership of the word gathering. I decided this group needed to go public with their word learning.

As I reflected on the makeup of this class, I realized  I had quiet students who would not raise their hands unless I called upon them. I had four to six students who were eager to respond and tried to monopolize the conversations. Going public meant every student would have a voice in word learning. Here are some lessons that I used with this group to build a more public learning community.

I decided that our first step would be to share a common text. I remembered Jeff Anderson speaking about writing “word” shop. He used his document camera to share the first page of Three Times Lucky and asked us to collect strong words and phrases. For several days during our read-aloud I shared several picture books and asked my students to do the same process. But the shift came with asking each student to choose one word or phrase and write it on an index card. For our closing, each student shared his or her index card. Everyone was prepared to share and had a voice in our word work community.

From Notebooks to Daily Conversations

The next step continued to build on word shop. Instead of using a shared text, I asked my students to lift a line or a word from any text they read that day, and write it on an index card. We would come back together late in the afternoon to share what we found. Student comments included these:

I found that word in my social studies book.

I never knew that word could be a noun and a verb.

Remember when we learned about –ly? I found the word suspiciously.

The intrigue was building, and all of them were talking about words throughout the day. Some students had several index cards and other students had only one, but every student had something to share. We gathered words, and discussed and grouped them. We talked about similarities and differences. Our conversation was richer because all students had a story to tell with their word, including where they found it and why they chose it. We continued this process for several days.

My final step was going public and sharing Donalyn’s Miller idea of a graffiti wall. I have heard her speak several times and discuss the rich vocabulary in the books she shares. We were public wordsmiths now. One day after students arrived to the classroom, I placed on the dry erase board two blank pieces of butcher paper with the captions “Amazing Words” and “Lifted Lines.” I didn’t say anything all day—I just listened to the buzz in the room.

Why is there blank paper on our board?

Do you think she wants us to collect words and put them up there?

Do you think she is going to make a new bulletin board with them?

I gathered the class around the butcher paper and asked, “What is a graffiti wall?” Several students had confused looks on their faces, and we continued to brainstorm. Finally I assigned the challenge to lift a word or line from anywhere and explain why they chose it. I gave the option of decorating their index cards and told them to sign their names on their cards so other students could talk to them about their word or phrase. This was the final step. The shift occurred, and they now had a public place to display their word work.

The transfer of words in their notebooks to index cards displayed on the classroom walls was exactly what this group of students needed. This change in instruction definitely affected their writing, conversations, and amount of new vocabulary.

Maria Caplin is a 5th grade teacher at Bailey Elementary in Dublin, Ohio. 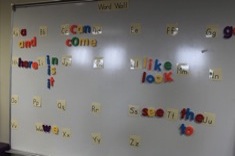 Raising the Quality of Word Work

Are your students getting bored with vocabulary routines?  Katie Doherty invents a quick and fun game, Vocabrity, to help her middle school students learn words. 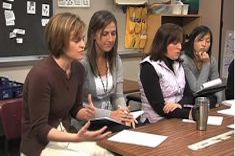 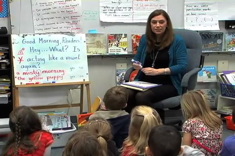 Second-grade teacher Linda Karamatic has been starting her morning with a message for years. The morning message is just one part of her daily opening that reinforces community. 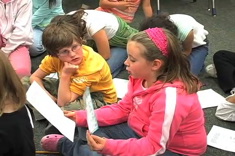 In this six-minute video, Franki Sibberson demonstrates how she helps her 3rd and 4th grade students make connections between writing workshop and math problem solving. 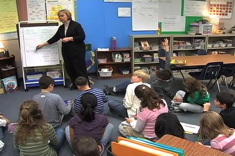 Karen Terlecky’s fifth-grade students share what they learned from their word study homework.