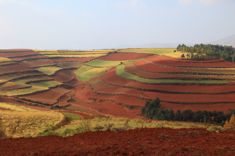 Poetry Friday in the Computer Lab

Poetry Friday is a regular routine in my classroom. You choose a poetry book, read alone or with a friend, and then come together at the end of the period to share/perform a poem. All comfortable routines need a shake-up now and then to keep them fresh. We were going to the computer lab so that my students could dig into Amy Ludwig VanDerwater’s Dictionary Hike on her blog, The Poem Farm.

Amy’s Dictionary Hike was her personal poem-a-day challenge for the 2012 National Poetry Month. She was inspired, in part, by poet and blogger Ed DeCaria’s Madness! 2012 in March — a poetry tournament in which pairs of the 64 poet-participants competed against each other, or “versed” each other, as my students would say (a perfect kid-ism, in this situation). Each poet was assigned a word of varying difficulty and was required to use it in a poem that they had just 36 hours to write. (A detailed explanation of the rules is here http://www.thinkkidthink.com/madness-2012-main/official-rules/). Amy made it to the Elite Eight in Madness! 2012, and it was that “Just pick a word and go!” kind of challenge that gave her the idea for the Dictionary Hike. She writes, “Each day, I closed my eyes and opened my dictionary to a new letter, checking beforehand where that day's letter began and ended in the book. I began with A and worked my way to Z. Once the dictionary was opened to a page, I would swirl my finger around, and then I'd let it land.” Amy collected all of her Dictionary Hike poems into one tab on her blog, making them easily accessible. Then she went another step further. She recorded herself reading each poem on Sound Cloud and embedded that recording along with each poem.

Headphones in hand, my students marched across the hall to the computer lab. I explained to them that Poetry Friday this week would be more solitary than usual. They would be reading and listening to Amy’s Dictionary Hike poems on their own, but we would get back together at the end of the time to talk about our favorites. As soon as the headphones went on, quiet descended in the lab and I was free to meander around the room, looking over shoulders and having quiet conversations with individuals about the poems they liked the best.

The first thing students noticed when they looked at the poem “Inflation” was its balloon shape. The familiar shape and the honest voice of the balloon in the poem, “Inflation/is scary if you’re a/balloon . . .” made this a favorite with many students.

Even though I suggested that Poetry Friday at the Poem Farm would be more solitary than usual, there were plenty of quiet conversations with neighbors. The poem “Knickknack,” composed entirely of words that clack and smack with K sounds, just begs to be read aloud. Many students loved this poem for the sheer joy of the sound of the words:

By the time my students got to M in Amy’s Dictionary Hike, there was singing and giggling along with the quiet conversations and the reading aloud with a friend. In “Macaroni,” Amy gives Yankee Doodle’s parrot a name, Tony, and an attitude: “Think about the way you speak./Don’t be language-lazy./Mind your words/or all the girls/will think that you are crazy.” Tony the parrot is also quite pleased when Yankee calls his feather a feather, and not macaroni. “Macaroni” was many students’ favorite because Amy sang this poem on her Sound Cloud recording:

Most of the poems in the Dictionary Hike were easily accessible to my fourth-grade readers. I happened to be near my history buff, “Sam,” when he got to “Northern Ireland.” The first time I read this poem, my brain did a major shift in understanding when I got to the ending. At the beginning of the poem, as you read about the three sisters who were born in Northern Ireland, you naturally think they are human sisters. At the end, when you read that the middle sister was named Titanic, your brain says, “Wait a minute! This is a poem about ocean liners!” And then you have to go back and read the whole thing over again. I wasn’t sure Sam would be able to make that shift on his own, so I stuck around and asked him to read the poem to me. When he got to the end, he was surprised by the word Titanic, but it didn’t seem like he was going to get the same jolting shift of meaning that I did. I told him about my experience reading the poem, about my shift in thinking when I got to the end, and how I had reread it to see if I could make more meaning. I asked him if he’d like me to read it again and we could think about it together. I read the first stanza and asked him what he was thinking. He started getting really excited when he reads, “ ‘You only know of one./You only hear of one.’ That’s the Titanic, I think! At first I thought these sisters were people, but I think they are ships, and the Titanic is the only one who was famous!” The second and third stanzas confirmed his thinking, and after we read them, he just about bounced out of his chair he was so excited. He read the fourth and fifth stanzas with me, and his emphasis on the descriptive words showed that he was thinking about ocean liners: “strong,” “stately.” I didn’t need to help him make the inference in the fifth stanza that Olympic and Britannic were the names of the other two ships — Titanic’s “sisters.” Sam wondered what the word “winsome” in the final stanza meant, and without my prompting, he opened the dictionary on the computer and looked it up, nodding to himself when he read, “attractive or appealing in appearance or character: a winsome smile.” Not surprisingly, at the end of the period, Sam declared “Northern Ireland” as his favorite, and took the rest of the class on his journey of understanding as he shared:

My personal favorite in the collection (and I was not alone — at least one of my students also picked this poem as her favorite) is “Xenophobia.” In any ABC book, I am always interested what the author will do with the tricky letters — X, Y and Z. In this poem, Amy uses both xenophobia and xenophilia to create a poem about how openness and understanding can overcome closed-mindedness and fear, even if it doesn’t happen for many years:

Take time to visit Amy Ludwig VanDerwater’s Poem Farm. Along with the tab for the Dictionary Hike, she has tabs to help you find poems by technique and topic. In the discussion below each of her poems, Amy speaks directly to students about how she created the poem, and to teachers, offering ideas for writing in the classroom. Maybe we don’t need to wait until May to have Poetry Friday in the computer lab at the Poem Farm! 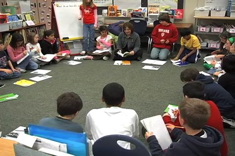 Poetry Friday! Poetry Books That Are Fun to Read Aloud

What do doughnuts and talk-filled mornings have in common? Learn about this Poetry Friday ritual that impacts independent reading time as well. 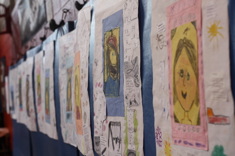 Stella Villalba explains how her poetry cafe program brings families together for a festive event, and helps English language learners develop reading and fluency skills at the same time.  This is the first installment in a two-part series. 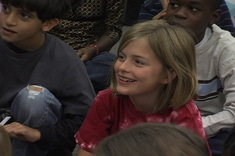 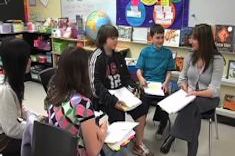 Katie Doherty works with a small group of sixth graders who need extra support as they read the poem “Aspects of Autumn.” 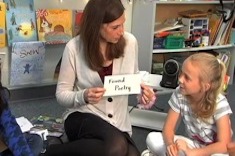 Linda Karamatic teaches a small group of her second graders about found poetry.