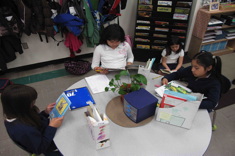 Just Because They Can Doesn’t Mean They Should: Choosing Age-Appropriate Books for Literature Circles

“Whatever you are doing tomorrow, cancel it! You have got to come and see Jan’s literature circles.” That was the message that Patty, a literacy coach, left on my voicemail. She had been working with Jan, a third-grade teacher, for about six weeks to help her get literature circles started in her class. Intrigued, I rearranged my morning appointments so I could be in Jan’s classroom the next day.

When I arrived, Patty steered me toward a group of five children sitting on the rug with their literature response journals and a black paperback book. As I got closer, I saw the title of the book – The Giver

by Lois Lowry. I was dismayed. Why would Jan select this book? Why didn’t Patty make another suggestion? I decided to block out my internal questions and concentrated on the children’s discussion.

The children were discussing chapter five. The character Jonas was telling his parents about a strange dream that he had the previous night. In the dream, he was in a bathtub and was trying to convince a female classmate to join him. His parents told him that he was having “stirrings” and would have to take a pill to get rid of them. Three of the children had written “stirrings” in the vocabulary section of their journals. One child said, “What do you think that means? I don’t think it has anything to do with mixing things up.” Another child said, “I looked it up. ‘Stirrings’ means ‘the beginning of motion or action.'” One of the other children wondered why the society in the book didn’t want people to take action. Then the children began to share their own strange dreams. They tried to figure out why this society would want to ban strange dreams so much that they would invent a pill to prevent someone from having them. Finally, the children turned to another page in their journals. They added “strange dreams” to a list of things that were not permitted in the village.

I met Patty in her office after the observation. She was practically jumping for joy. I certainly understood her excitement. She and Jan had done a great job getting the literature circles started. There were so many good things in place. Jan’s students had all actually read the chapter. They came to the literature circle prepared for discussion. The children were focused, stayed on topic, and did a good job taking turns and listening to each other. I was really impressed that the children were able to do all of this without the teacher’s overt supervision. I finally asked Patty why these eight-year-olds were reading The Giver

. She replied, “Because they can. They are all very strong readers. I think they can handle sophisticated books.”

Those childrenÂ wereÂ strong readers. They were capable of reading a book that is usually read in middle school with accuracy and prosody. However, they didn’t have the life experiences to support the reading of that book. It was not an age-appropriate selection. Every middle school student completely understands what was happening to Jonas when he was having “stirrings.” Talk about a text-to-self connection! The themes in The Giver

are well beyond the comprehension of most eight-year-olds. These are children who believed in Santa Claus and the tooth fairy just last year. Are they really ready to grapple with the concept of utopian societies? Can they comprehend and discuss the idea of giving up individuality, choice, and independence for safety and security? Is it even fair to ask them to think about such ideas?

Think of the books that these third graders are missing! When they are thirteen years old, they are probably not going to go back and read novels featuring eight- and nine-year-old characters like those in Love, Ruby Lavender

(Wiles, 2001). I strongly suspect that they won’t pick up the picture books that they missed, like Chicken Sunday

(Polacco, 1998). It is also unlikely that they will willingly go back and reread The Giver

when they have the life experience, cognitive development, and emotionally maturity to truly comprehend the book.

Jan and Patty are not the only teachers who are guilty of giving children books “just because they can read them.” I routinely see books that are traditionally read in high school being read in sixth-grade classrooms. Many first-grade teachers feel like they haven’t done their job if there isn’t a group of children in their class who are reading chapter books by the end of the school year. These book choices are encouraged and applauded by school administrators and parents.

Once I went to a school to conduct a professional development workshop. The principal eagerly led me to a fifth-grade classroom so I could see the students reading Shakespeare. I understand the importance of giving children books to read that support their growth and development as readers. They won’t make progress as readers if they only read easy books. However, there are better options for young advanced readers than young adult books. Teachers need to look at more than the readability level of the book when making book selections. A book’s theme, the students’ interests, and the possible teaching opportunities should also be considered.

Challenging Advanced Readers at Any Age

A good source of books for advanced young readers is probably right at any teacher’s fingertips. It is the books that a teacher would select for a class read aloud. No third grade teacher would consider reading aloud The Giver

to a class. Class read alouds are generally above the instructional reading level of most of the children in the class. That probably makes them just right for those advanced readers. These books have rich and challenging vocabulary, yet the ideas and themes are comprehensible for younger children. Most of all, teachers always select age appropriate books for read alouds.

The following books are written at a fifth- through eighth-grade readability level and are good choices for advanced young readers:

This exciting, fast-paced book features Poppy, a timid mouse. She and the other mice of Dimwood Forest are terrorized by Mr. Ocax, the owl. Poppy tries to find the courage to stand up him. This book lays the foundation for the themes and ideas expanded upon and further developed in The Giver

. There are five sequels to this book suitable for independent reading choices for children who can’t get enough of these characters.

DiCamillo, K. 2003. The Tale of Despereaux: Being the Story of a Mouse, a Princess, Some Soup and a Spool of Thread

Despereaux is a mouse that is different from all the other mice. He’s smaller and has very big ears. He likes to read and most alarming, he is in love with a human girl. In DiCamillo’s Newbery Award winning book, children will meet colorful characters, encounter interesting language, and become totally engrossed in this charming fairytale-like story.

Mario is delighted to find a cricket while picnicking with his family. He decides to keep it as a pet. Chester, the cricket, charms Mario with his music and befriends Harry, the cat and Tucker, the mouse. However, Chester finds living in New York City a big adjustment.

I have yet to meet the child who doesn’t love this book! The Borrowers are little people who live under the floor boards of a house. They borrow things (stamps, matchbooks, keys) from the big people who live in the house. Their “borrowing” could have gone on indefinitely, but a little boy and his ferret see one of them. This book also has several sequels for ongoing independent reading fun. 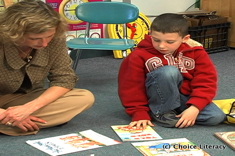 Clare Landrigan and Tammy Mulligan consider how the incredibly useful and widely accepted “just right” term can sometimes limit how students think about book selection and their identities as readers. This essay includes sample lessons to help expand the ways young readers think about and discuss their reading preferences. 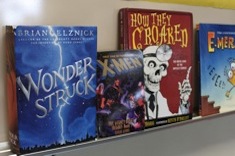 Shari Frost asks a provocative question: Can books harm children? She explores practical ways for teachers to walk the fine line between support and censorship in matching books to students. 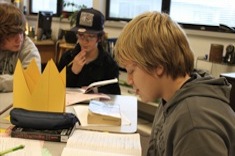 Shari Frost describes how a sixth-grade teacher provides a range of poetry options to meet the needs of all students.