[Now you can listen to the Big Fresh as a podcast!]

That Isn’t True for Me

In my hometown there were a few news stories highlighting racial injustice at our local high school. As more and more news outlets picked up the story, the narrative turned harsh against the school and the community.

Our transracial family watched the coverage unfold. We lingered after dinner and broke our “no screens at the table” rule to watch the news reports, read articles, and let our teenage kids share their social media feeds.

Our Black son is a sophomore at the high school under attack for being a racist and unjust place for Black students. He was indignant. “That isn’t true for me,” he insisted.

The simple and complex truth is this: Just because it isn’t true for him doesn’t mean it isn’t true for others. Our son has experienced undesirable situations stemming from race. I could write about them here and your blood would boil; at least mine does.

As the news coverage continued, our son’s anger grew. “They’re making the school and our town look horrible,” he said.

“Maybe we should tell your story,” I said.

“Mom. No.” His tone made it clear that it wasn’t up for discussion.

I let it drop, but as the days unfolded and his anger continued, Andy and I decided, as his parents, to write a response in the form of a letter to the editor.

Back at our dinner table, the kids were sharing more conversations that were happening at school. There were so many layers, and Andy and I felt ill-equipped to guide our family through making sense of a series of senseless acts. Our son remained angry and wanted someone to stand up for the school and community.

“I know you don’t want to tell your story,” I said.

“Mom.” His voice was deep. “I don’t like being the person that people always look to for me to speak on behalf of Black people. I don’t know what all Black people think. I just know this makes me mad.”

Andy said, “Mom and I wrote a letter to the editor, just for our local paper. Maybe you want to read it and see if you think we should submit it?”

I was surprised when his shoulders relaxed and he took the draft from Andy’s hand. As he read with concentration, his body continued to relax. He finished and said, “Yeah, send that.”

“I’m sure,” he said, and started to clear the dishes.

We waited a few days to make sure he was sure. He asked about it each night. Finally he said, “If you think I’m going to change my mind, I’m not. I think people need to know how things are for me, too.”

I’m still not sure how to navigate the injustices in the world, but one thing I’m sure of is that it begins with listening and encouraging one another to tell our stories. It is the rhythm of listening and telling our stories that will change the world.

This week we look at meaningful conversations. Plus more as always—shine on!

This month’s Featured Contributor is Christy Rush-Levine. Christy is a middle school language arts teacher outside of Chicago. Connect with Christy on Twitter, Instagram, and her blog, interstice. This month you’ll find her on the Big Fresh podcast, taking over our Instagram feed, and releasing her course about conferring with readers. Learn more about Christy and find her articles and videos on the site by clicking here.

Christy Rush-Levine joins the podcast to discuss her new article (linked below) and current thinking about meaningful conversations, as well as her course Meaningful Reading Conferences: 5 Minute Wonders (linked below).

Franki Sibberson shares ways to initiate conversations about books naturally in classrooms. This feature from 2012 includes a question set for launching discussions about books with individual students that remains relevant today.

Meaningful conversations don’t have to always be somber. Jason Reynolds, National Ambassador for Young People’s Literature at the Library of Congress, presents an inventive way for young people to engage in ideas through his “Write. Right. Rite.” Series.

The ADL gives advice on how to engage young people in conversations about race and racism.

Our courses are now live on the site! In a time when it is crucial to hear from educators on the front lines, Choice Literacy is pleased to bring you content straight from educators who carry full-time contracts with schools and are navigating the uncharted territories of a pandemic. Members will find free access, and everyone else may purchase the courses.

Christy Rush-Levine takes you into her middle school classroom and shares the strategies and techniques she uses with her students to deepen their reflection and understanding of books while conferring. And this is all done in five minutes or less without feeling rushed or constrained by a protocol. Meaningful Reading Conferences: 5 Minute Wonders is free for members and available to purchase for everyone else. 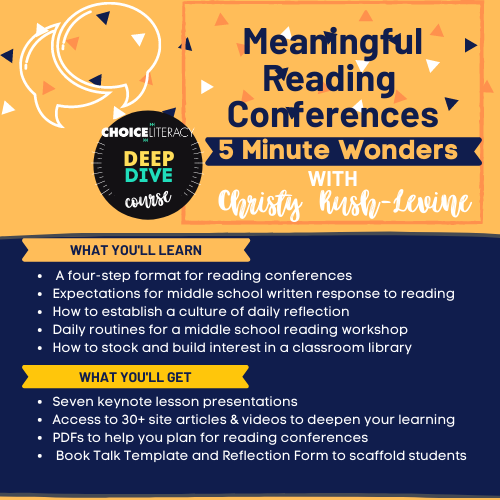 Matt Renwick explores ways in which whole-class conversations around one text can build a strong community as understanding is co-constructed.

Ruth Ayres observes a writing workshop that is remote. She reflects on the ways students offer feedback and how their community of writers is established.

In an encore video, Christy Rush-Levine uses a vivid anecdote from her youth to teach her middle school students about the importance of context in literary analysis.

Are you working with teachers virtually? Check out our course Virtual Coaching: Working with Individuals. Experienced literacy coaches share their strategies for adapting their one-on-one coaching techniques to a remote environment. Free for Literacy Leader members.

Brian Sepe is inspired by trending hashtags and offers a step-by-step guide to lead colleagues in finding priorities in a unit of study.

In this Coaching Minute, literacy coach Jen Court explains how she works to support better communication about literacy instruction in her school.

Dwight Smith suggests 10 ways to lead others in meaningful conversations about race.

A real conversation always contains an invitation. You are inviting another person to reveal herself or himself to you, to tell you who they are or what they want.
—David Whyte

That’s all for this week!

Equity is the theme of this week’s newsletter.

Choice is the theme of this week’s newsletter.

Fresh starts is the theme of this week’s newsletter.