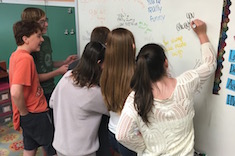 Peer feedback is something we value for ourselves, and so we’re always looking for ways to improve the quality of feedback our students give and get.

In middle school, we were noticing that the peer feedback that kids were giving in partnerships seemed to lack depth. We assumed that this had a lot to do with how apprehensive kids can be to give critical feedback to one another. Middle schoolers are often treading carefully when it comes to interactions with their peers and how they will be perceived by others.  Even though we spend a good portion of the day with them, we don’t really know the intricate ins and outs of their social hierarchies. It makes sense that they struggle with giving feedback. It feels safer to make a vague comment than to point out specific strengths and weaknesses, which is why the conversations we were overhearing between partners were often sounding like this:

This type of feedback doesn’t give the writer anything to support revision. What’s the point of feedback if it doesn’t contribute to the growth of the writer?

We also have certainly considered how difficult getting feedback can be for our students. Sharing your writing is sharing a little bit of yourself, and so receiving feedback can be very personal. So, with all of this in mind, we start the year by talking about how important it is for writers to be brave and using Sara Bareilles’s song Brave to emphasize this.

We make sure to teach our students that feedback should start with two  pluses (compliments) that are followed with a wish (feedback/suggestion). Within this feedback, we’ve taken a page from Peter Johnson’s Choice Words and modeled language to give feedback that sounds like a suggestion rather than must-do. So it sounds like, “One thing you might try is…” instead of  “You should …”

But, even with this work, we realized that students were still hesitant to give and get feedback.

In our own writing, we were recently introduced to “writing response groups” as a way to get peer feedback to drive our revision. In this structure, groups of three writers each bring enough copies of a piece of writing for all group members. The writer may share a particular area they are looking for feedback before starting. Then all the group members silently read the writing while taking notes to share at the end. This process is repeated for each group member.

While we felt a little apprehensive watching others read our writing, the authentic feedback that we received was invaluable. We right away started to think about how to bring this structure back to our students so they could experience the same type of feedback.

A few days before we planned our writing response groups, we let students know that they would need three copies of their draft to participate. We reminded students both in class and on our daily classroom reminders. Any time there is a requirement to come with a printed copy for class, we make sure to remind students of the option to come in early or at recess to use the printers in the library. We made sure that our response groups knew they were meeting to look at drafts, not published work, so that our students would remain open to feedback and revision.

The first time we tried this structure we explained the expectations to students the day before so they would have the benefit of an entire class period to meet in their groups. We began our explanation by telling students how the pieces that we brought to our groups were pieces that we felt proud of. While we were sure that there would be suggestions, we weren’t fully prepared for the depth of the suggestions. But after leaving the group, we felt energized to make major revisions to a piece of writing that we had thought was almost finished. Our explanation included showing students our own writing that had been annotated by one of the peers in our writing response groups and showing the notes we took on our own copy when we got feedback.

Here are some of the things we did before the groups to help things run smoothly:

We discussed and charted the differences between writing response groups and our normal writing partnerships:

This chart was co-created with students to record differences between writing partnerships (a more familiar structure for feedback) and writing response groups (the new structure we were trying).

We  provided an “artifact” to support giving feedback to peers. This is an “artifact” card that we give to students to use as they practice giving  feedback to peers.

We modeled annotating a peer’s writing for the purpose of giving feedback.

We modeled recording feedback on own writing that has been given from a peer.

We had each student make three copies of their drafts. Aftering Forming groups of three, we provided and discussed general guidelines/protocol for each trio:

Once students were in their groups and we had modeled responses, they got started. We watched and coached as students read and annotated their peer’s work and did not offer our own feedback. These groups were for peer feedback. Our interactions were limited to prompting students who were getting feedback to take the time to re-read their own writing as their peers read and prompting students who were giving feedback to annotate the writing to support their feedback. We were impressed by the level of engagement in the groups and felt hopeful that our students felt the same way we did when we participated in writing response groups for the first time.

Benefits of the New Structure

The feedback given was thoughtful and specific. We think this has a lot to do with having three people. It seemed to increase accountability for giving specific feedback. Student writers had the opportunity to hear two perspectives on their writing which in turn gave them more choices when they were revising

Giving peers a copy of the writing to mark up seemed to help peers to take ownership for the feedback. They spent more time looking at the writing and wrote things down that they shared.

Drawbacks of the New Structure

This is a time consuming structure for peer editing. In order for all three writers to get specific feedback from 2 peers, we find that the structure takes most of a class period. The structure can be a little tricky when the groups don’t work out evenly for groups of three. We had two teachers in the room, so one of us was able to fill in as a partner to even things out when needed.

This takes some planning time since all students need to come with three copies of their writing. We found it to be important to have a physical copy of the writing in their hands that they could mark up.
We were prompted to try writing response groups with our students the first time because we had such a positive personal experience when we were introduced to them. We were encouraged to continue writing response groups because we saw such great engagement from our students. We’re sure that this may have been partly because our students, like us, like to try new things. But we also can’t discount the power of collaboration in these groups of three, and the value of having the drafts in front of writers to mark up and make specific suggestions. 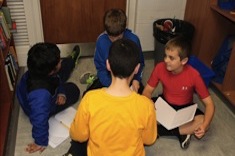 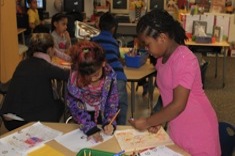 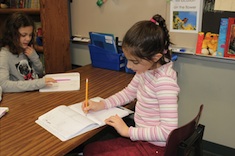 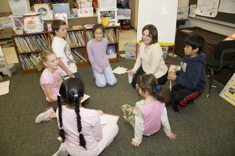 Franki Sibberson describes how she organizing writing groups in her grades 3 and 4 classroom, and shares a video of a writing group considering leads. 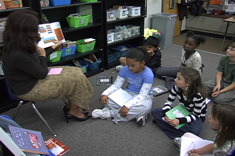 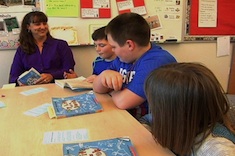 Gigi McAllister assists a group of students who are trying out bookmarks of discussion prompts for literature groups.