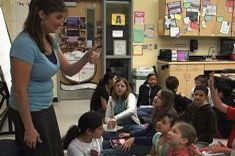 The Truth About Building a Writing Community in Middle School

I teach four sections of English Language Arts to seventh and eighth graders. Early in the school year, I set out to create a community of writers. I wanted my students to understand that it’s okay for them to write about whatever they want — that if their dream last night was bothering them they should write about it, and if their little brother’s poopy diaper exploded at the dinner table, they should write about that too. I shared examples of memoirs that included scenes filled with vomit, violence, and love with a few choice four-letter words thrown in for good measure. I shared examples from my own middle school journals that read like the litany of a love-crazed tabloid starlet with the attention span of a hyperactive Chihuahua.  I set them up to write about whatever they wanted, and to do so really badly and know that it was okay because that’s what writers do. Writers have to muck around in the gunk in order to get to the really good stuff.

It’s All About Me

I remember. I remember walking into my seventh-grade classroom on the first day of school knowing that everyone was noting every flaw. The perm I had gotten over the summer attempting to emulate Kelly McGillis’s look in Top Gun

had suddenly become homage to the Muppet Animal. A lackluster wardrobe highlighted my undeveloped chest. No amount of Teen Secret Solid could mask what was happening in my armpits. Neon arrows accentuated the pimples on my face — my own adolescent version of “Eat at Joe’s.” I wanted nothing more than to become invisible and melt into the floor. In reality, my peers were likely so steeped in their own version of what is that guy looking at and is there a booger hanging out of my nose and omygodimgonnadie that they couldn’t possibly have found the energy to notice and then mock my imagined flaws. The truth is reality can be a foreign land for middle school students, who navigate through an incongruous bazaar of vulnerability, insecurity, and fiercely dependent relationships. The thought of sharing something as personal as a piece of writing — one that might not even be that good — can send someone deep inside themselves.

However, it is exactly this emotional landscape that provides middle school students with the fodder all writers need to write authentically and with conviction. Rarely in our lives do we experience emotions with the intensity that we do between the ages of twelve and sixteen. This is when we in our traitorous bodies begin to test the waters of joy, love, angst, and fear as emergent adults. It is those emotions that writers draw upon to tell the stories that connect us. Whether we are writing creative fiction or narrative nonfiction, the writer who brings raw emotions to the table is the writer who wins the hand.

I thought I had done all I could to help students feel like they could share themselves through their writing. Yet, in three out of the four classes I teach, halfway through the year students are reluctant to write about these emotions and the lion’s share of them refuse to share at all, regardless of the subject matter. Granted, they will sit next to their friends to get feedback, but there is no sense that we are, the lot of us, a writing community.

Except in one class. There’s a reason for that, and that reason is not me. As much as I would love to think that I have the power to coax 32 adolescents to open themselves, let’s be honest. The myth of the teacher as the Pied Piper is just that — a myth. We don’t lead them. They lead themselves.

The very first time I invited students to share writing with the entire class this year, there was one student in my third period, Alyssa, who raised her hand. She read in a quavering voice the story of how she did not know her father; how he had chosen a life in prison over her; how even when he had the opportunity, he would not come to see her; how she felt cast aside and utterly rejected by the man who should have been the most important man in her life. Alyssa felt unwanted. As she read, speeding up near the end, there was an element of panic in her voice — but she never stopped. She took an enormous leap of faith into the pool of her peers. When she finished, the room was silent. They all held her pain for a moment while she collected herself. They accepted her.

Those students had proven to themselves that it was okay to be vulnerable. I could have told them that, but the bottom line is that if they don’t do it, they’ll never know they can, and it won’t ever happen. This became evident at the end of the first semester, when I invited students to write a reflective piece on their first two quarters in our English Language Arts class. Most students reported they had learned lots of vocabulary and read lots of books. Of my four classes, Alyssa’s class was the only one where I got comments like: “I like writing in this class. I feel safe sharing.”

I don’t know the secret of how to get an Alyssa to open up. But I do know that if the space wasn’t there for her to share her writing, she might never have had the opportunity to do so. Perhaps I have been relying too much on my own powers of modeling. Perhaps I should focus more on providing opportunities for students to talk to each other and keep my big mouth shut. I do believe it is important for us to model how to share our authentic selves with our students. It is important for us to read those pieces that we legitimately feel insecure about and ask for real feedback. But it is equally important to realize that a community is built by all its members, not just by the one who’s racked up the most embarrassing moments in life. 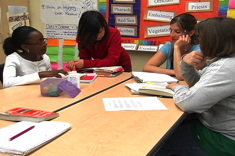 Katie Doherty finds surveys of student reading habits and preferences are really useful in the winter, after she knows her students and they’ve settled into a routine. 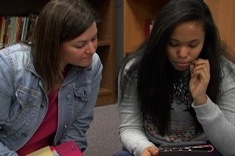 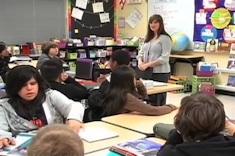 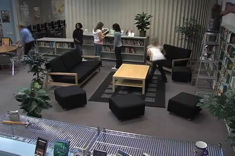 In this first of a two-part video series, “The Sisters” (Joan Moser and Gail Boushey) work with students, a librarian, and a principal to makeover a middle-school library. This first installment features the creation of a “cozy area” and new book browsing displays.