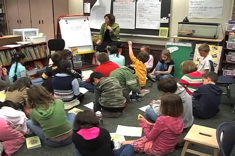 Reflecting on the First Six Weeks of Word Study

Going into word study with a different plan is always a little scary. With the first six weeks of school finished, it feels like it is time to see where we’ve been and what I’ve learned. This year, I am working hard to make sure that my word study work makes a difference. Rather than going through the motions of studying patterns, sorting words, etc. I am making sure that every lesson connects in some way to students’ reading and writing. And I want them to know that too.

We have spent the last six weeks learning ways to think about words together. It has been fun and we’ve built a strong understanding of the ways we can look at and think about words. I am just now seeing transfer into student writing so I know the work is making an impact.

Word Observations have been the anchor of our word work. We have done several word observations that have led us to great conversations and have given me a great deal of information on the things my students do/do not understand about words.

We began by looking at our name, as Max Brand suggests in Word Savvy

. Students noticed a variety of things — the number of letters, the number of syllables, etc. They noticed which letters were more popular than others.

We moved from name observation to word observation. I chose words based on the things I saw in our Developmental Spelling Assessment. I chose peaches as our first word to observe knowing that it was a word that would invite diverse responses from students at various developmental level on the spelling continuum.

Word observations allow students to come in and observe at a point that makes sense to them. While I have some students counting vowels (“there are three vowels in that word”), others are noticing digraphs, and others are commenting on the vowel patterns. There is room for everyone in a word study.

After a few lessons, I thought that my students understood the purpose of these observations. I was pretty confident that they understood that they could use what we were learning in their reading and writing. So, after an early word observation, I asked them why they thought we spent so much time on these — how they would help them in their own reading or writing. They responded that if they were ever writing about peaches, they would be able to do that. I was shocked. But I shouldn’t have been. I had learned long ago that sometimes we assume students don’t automatically transfer learning to another context without some explicit instruction.

This is a mistake I had made in the past — assuming that students would transfer the knowledge and use it when they needed it. So, I planned a few lessons helping students understand how understanding how this word is put together may help you when you are writing another word. After several lessons, students began to say things like, “Oh, when I am making a plural, I might need to add -es instead of just -s like in peaches.” This talk then became part of every word study lesson, and is making a huge difference in the transfer.

Words We Can Use When We Talk About Words

Because people all enter at their own level, we have collected a large variety of words that we can use when we discuss words. These words not only give us a common language, but they serve as a scaffold for the students to think about words in new ways. We created this list after several word observation lessons. I pointed out that the same words kept coming up over and over. We created a board listing the words we often use when thinking and talking about words. I was amazed at the number of words that we had on the board. Since the board has been up, students have been more comfortable using new language and observing new things about words — for example, students who did notnotice suffixes before may now use that word to talkabout the ending on the word. The try-it sheet is used by students to test out different spellings for words — it’s something we tried out together as a class, and students also completeindividual sheets on their own. It became clear when I looked at students’ daily writing that almost all students were having trouble with spelling multisyllabic words. They often missed the middle syllable completely, or finished up before the word was complete. By looking at daily writing samples, it didn’t look like they had strategies for spelling longer words – words with many syllables. Since the students knew how to use the Try It sheets to attempt unknown words, I wanted to add a new strategy to their menu of options.

So, I taught a lesson on breaking words into syllables in order to think about their spelling. This class is very confident in clapping out syllables but they don’t often use that knowledge for spelling purposes. So, we clapped out a few long words from their writing and, as a class, attempted to spell them, syllable by syllable. Because I know that something tangible or visible is important for students of this age, I taught them to draw lines for each syllable. This helped students at all levels of spelling. Some students realized that each syllable would need a vowel, while others were able to hear and record more sounds in words. I am already seeing evidence of the use of this lesson when students use their Try-It sheets. Using Great Verbs in Our Writing

Our first genre study in writing workshop is how-to writing. We have been studying published pieces and are working on writing our own how-to pieces. When we were studying other how-to writing, a student mentioned, “The authors use good words to tell you what to do.” This seemed like a perfect time to introduce parts of speech, so we talked about the strong verbs that authors of How-To writing use. We then went on a hunt for great verbs in how-to writing and added them to a chart. Students not only found words in the books we were studying but also noticed the type of how-to writing necessary in cooking shows on television. As part of our how-to study, we also took some time to look at the ways sentences are put together. Because students had so much experience with word observations, their initial comments revolved around the words in the sentence. I expected this for our first few sentence studies. The students started with the things they were comfortable talking about.

However, after a few minutes, some other ideas surfaced – the apostrophe showing possession, the comma after the word weeks, and the capital letters at the beginning of the sentence and at the beginning of a name. These were basic observations about sentences, and I know we will add to these as we continue to do these more often. I am hoping that sentence study becomes more of a study of the sentence rather than word observations in the sentence. I am working to guide the talk in that direction.

The first six weeks of word study has given us a great start. I am excited about the kinds of things the kids are noticing about words. I am already seeing a bit more transfer to their writing. I have lots of conversations to build on when I confer with students about their spelling. In the context of the writing workshop, I can remind them of how a suffix is often added to form a plural or how to stretch out a long word when attempting to spell it.

As I look ahead to the rest of the year, I think the work with word study gets harder. This initial phase is the easiest for me because it is based on what the students notice. Now I need to zero in and continue to raise the level of lessons that work for all students, and then help each student transfer those skills into their own writing. 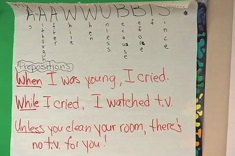 Word Study is More Than Spelling

Franki Sibberson works to expand her views of spelling and word work, redefining routines in her grades 3 and 4 classroom. 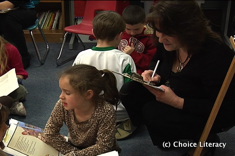 Easing into Assessments During the First Six Weeks of School

Franki Sibberson and Karen Szymusiak have suggestions for integrating observations and assessments of students naturally into reader's workshops during the first six weeks of school. 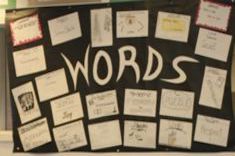 Shari Frost considers the “go-to” instructional strategy for struggling readers, word study, and explores how to make it work well in a case study of a third-grade group. 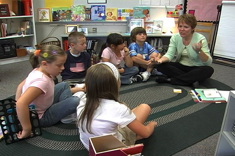 In this five-minute video, Gail Boushey leads a short small-group lesson on vocabulary. 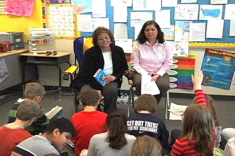 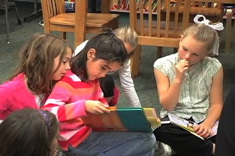