. In the book, Patrick and his colleagues from the Public Education and Business Coalition in Denver, Colorado describe ways to integrate test preparation in reading and writing workshop that have thoughtful, independent work at their heart.

In this conversation with Franki Sibberson, he talks about what wise test preparation looks like in his classroom. A transcript is below the player.

Franki Sibberson: Patrick, when you worked on Put Thinking to the Test

, you and your colleagues did a lot of learning about test-taking. Can you talk a bit about what you learned as a test-taker?

Patrick Allen: Yes, I can. We had so much fun investigating this idea of how can we mesh what we do with thinking strategy work into the realm of test-taking. And I can only speak for myself – I can’t speak for Lori and Missy and Cheryl right now; you’d have to talk to them. But I can tell you that we learned that you have to approach this idea of testing wisely. We took it from that stance of inquiry that we take so many things in our teaching from. We decided that we can help students think within the specific genre.

For us it was more about how do we prepare students to take a standardized test within the culture of thinking that we’ve already developed in our classrooms; that was what was most important. And the first step was to try on test-taking for ourselves, and it was just a really interesting journey because we learned so much about the way we take tests. And then we said, “Well, if this is what we do, how can we help students do this in an authentic, purposeful, not strictly focusing on test-taking way?”

Franki: Okay. And how do you work to teach to your beliefs and make sure your students do well on the standardized tests that have also become so important? How do you balance those two things?

Patrick: I think that we don’t throw out wise instruction just to teach them to the test. I think that for us, we wanted to honor all of the work that we do with children, day after day after day, knowing that for us, it’s not just teaching them to do well on a test that they take. That’s summative; that’s something that they take that they don’t get the results from until the following year. But we thought if we’re going to be fair with our children, we needed to come up with a way to make it work authentically; that we wanted all students to be encouraged to think when they’re put into testing situations.

And while we don’t always agree with those testing situations, we wanted them to be able to take that same ability to solve problems and be decision-makers into the test-taking realm.

Frank: Okay. And can you talk a little bit about test-taking or testing as a genre? What do you mean when you say that?

Patrick: As we were going through this inquiry of how can we take this idea of teaching children or encouraging children to determine what’s important, to create sensory images, to infer, in a test-taking situation, we really found that there were some specific things that tests had. They had a specific format and specific content. We looked at very specific test-taking vocabulary, and specific procedures that come about in those testing situations. We looked at using tests, released items, as mentor text, because we recognized that there were some similarities to all of the release items that we studied.

That if we could bring those periodically into our readers’ workshops, we could prepare children to do well without having to stop and spend two weeks right before the test jamming them with things and making them even more nervous about something they shouldn’t be nervous about in the first place.

Franki: Okay. What kind of things do you think make the most difference in student success when you work with test preparation?

Patrick: I think that, you know, our ultimate goal is for children to be successful. And until we come up with something different – and by “we,” I don’t mean “we,” I mean “they” – come up with a different way to assess children, I think that our work with Put Thinking to the Test

helps bring thinking of students to the forefront. I think that we have to be really smart about the way we view this; we don’t wanna overwhelm students. And I think it’s about letting kids in on the secret.

I mean if we let kids in on the secret of what this test is for, and what they can expect, and let them in on the bigger picture, it doesn’t come as a surprise to them. And so if we can – if we want students to be successful, we can work on the idea of test prep in a wise, thoughtful, inquiry-based way, so that it doesn’t have to be workbook page after workbook page after sample test after sample test. Because then what we’re doing is we’re putting the importance on something besides what they do on a day-to-day basis, which is think.

Franki: If you can think back to your test prep work before you did this research, how is your test prep in your classroom different than it was in the past?

Patrick: I think that what I did in the past was probably what a lot of people did. You felt that pressure, so you started mimeographing pages, and so you would make these packets of test prep materials, and they really didn’t show any results in the end. Children got bored with them. It was more like having kids fill in blanks and color in dots, but you never talked about the thinking behind it, and I think one of the big changes for Lori and Missy and Cheryl and I was that we realized that test prep has to be something that’s authentic. It has to be couched in what we already do.

It’s not something separate, and it’s not something that we put 90 percent of our focus on. We put it into our readers’ workshops in small amounts, so that when kids take the test, they’re ready, but they’re not overwhelmed with it. I think that it’s important to know that – for children to know that after all is said and done, that they’re gonna leave our care knowing that we cared. Not only about them as test-takers, but about them as people and as thinkers; and I think that’s how my test prep has changed. I don’t pressure myself so much. 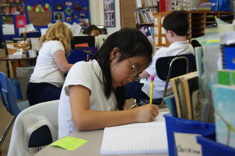 Student distraction is a critical issue during assessments.  Jennifer Jones provides a series of quick activities to help students focus before state examinations. 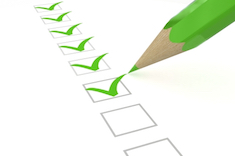 Coaching for the Test

Two teachers are disappointed in student assessment results, but they have very different approaches to tackling the problem. Heather Rader shares her role as a mentor in assisting her colleagues.

Yes, test data can tell us about students. And yes, there is much, much more. Kathy Collins emphasizes pulling back and getting a wider angle on students in this podcast. 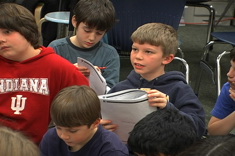 Franki Sibberson prepares her grades 3-4 students for state examinations by helping them observe attributes and patterns in test questions. 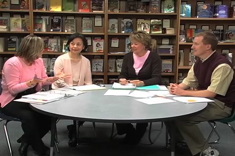 In this video of a 3rd grade team meeting, literacy coaches Janet Scott and Gail Boushey help third-grade teachers think through what is going well with test preparation, and what might be adapted before the tests begin in a few weeks. 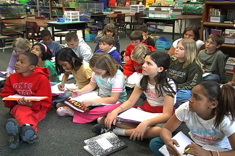 Question It – Know It – Show It  are the keys to test preparation in Andrea Smith's 4th grade classroom.