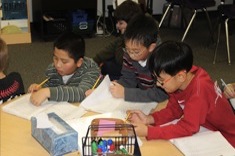 Years ago I stumbled across a little book titled The Reading Zone by Nancie Atwell. It was there that I first discovered reading response letters. Further reading of The Book Whisperer by Donalyn Miller and Guiding Readers and Writers by Fountas and Pinnell cemented the importance of my students responding to their reading — and so, I began.

Reading response letters are essentially a conversation between you and any student about what they are reading. They write to you, and you write them back. I have found them to be beneficial for many reasons. One, the way I ask the students to structure the letter is with an emphasis on their thinking about the book. There is space for a short summary, but what I want is their reactions, connections, and inferences.  Through the letters I get to know my students better as readers. We discuss their habits, struggles, and more. We recommend books to each other. Finally, as a bonus, they learn the format of letter writing.

I enjoyed reading response letters and looked forward to writing back to my students until our school became semi-departmentalized. I was no longer writing back to 20-24 students a week in my fifth-grade classroom — I was writing back to 80 students in three different classes I met with daily. Conservatively I’d say I spent 15 minutes on each student’s notebook. That meant I needed to find 20 hours in my schedule to respond to and grade each batch of responses. For two years I slogged on. I knew there was value to the letters, but I also knew I began to dread the day they were due.

This year I made a change. The first part of my response evolution was that each child had ONE letter due each month, and each class had those letters due during a different week. So if one class had a letter due the first week of September, the next class might be due the second week, and the final reading class the third week.

One response a month from a student was not too much to ask for in my opinion. I still wasn’t happy. I wanted students responding regularly to their reading. What else could I do? I looked at my classes — there is a wide variety of students with different strengths and interests. I decided to build a menu of choices for responding. That way on the week you don’t have to do a letter, you can choose the format you wish to respond in. My menu consists of:

The other switch is that in a given week responses are due on different days. For example, one week might look like this:

This spreads out my grading even further and allows me to really focus more on each student.

So far the kids have responded positively to the book response options. I find it interesting how certain kids gravitate toward certain responses. I love that they each can find something that works for them, and cheer them on when they try a new style of response. While this switch did alleviate some major grading and time issues I was having, the main reason for it was to ensure that students continued to respond to books in ways that were authentic for them. 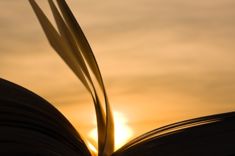 One Book, One School: Building Community with Shared Text

"When given the choice between being right or being kind, choose kind." These words from the book Wonder set Katherine Sokolowski on the path of designing a shared reading experience at her school that will build community and empathy across the grades.

It’s a dilemma many middle school teachers face. How do you construct anchor charts with multiple groups of students, when only one chart will be hung in the room?  Katherine Sokolowski explains how she ensures all classes have input and a “clean slate” in constructing charts. 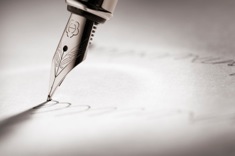 Karen Terlecky reconsiders one of her favorite writing assignments. 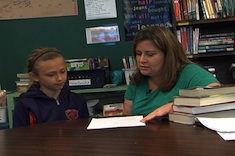 Building "next-read" stacks with students before holidays is a great way to ensure they have books in hand that they will be excited to read over break. Katherine Sokolowski helps Taryn finds books that are similar to those written by Rick Riordan (Taryn's favorite author). 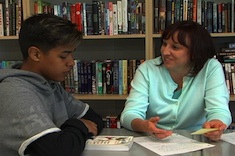 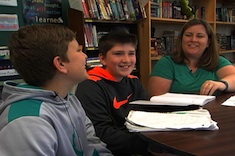 Katherine Sokolowski confers with her son Liam and his friend Caden, helping them learn how to make peer book recommendations.