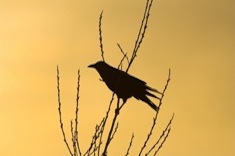 Potato the Crow: Blurring the Lines Between Reality, Fantasy, and Play with Young Learners 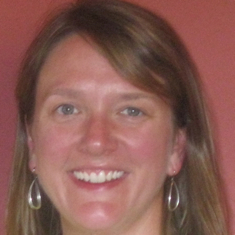 One fall day as I strolled through the aisles of the dollar store looking for classroom curriculum, I came across an artificial crow.  It was realistic looking, with feathers over its styrofoam body and two beady black eyes.  At the feet were two small wires for attaching it to some sort of mount.  With artificial autumn leaves already in my basket, the crow seemed like a perfect addition to the top of our playhouse.  I purchased it, and mounted it on the house where the children could touch it.  On the first day several grabbed and tugged it to confirm its styrofoam body and determine it was inanimate.  One child asked me for its name. I replied, “How about you name it?”

To which she promptly named him “Potato.” The fake bird became a bit of a classroom mascot, lasting on top of the playhouse well beyond its intended fall season and into the winter.  Some restless preschool day in January, a child got ahold of poor Potato, perhaps hoping to work out whatever angst was deep inside him, and tugged off one of Potato’s eyes.  After a stern Respect Our Things speech by me, Potato was removed from harm’s way and retired to the cupboard for the following school year. But the crow was out of curricular rhythm now — unfortunately he did not get stored in the fall box with pumpkins apples and fake leaves.  Rather, he floated around homeless in baskets of environmental mismatch I like to call “classroom compost.” Throughout the year he’d bounced around with the January mittens, the March daffodils, and finally nested in the watermelon curriculum boxes at the beginning of summer and was promptly forgotten.

Fast forward to one year later, when I was unpacking watermelon supplies and thinking about kindergarten transition and the end of the year.  It was June, and although I was carefully coordinating the room to conjure thoughts of lemonade and sunshine, for no reason at all I decided to live on the curricular edge a bit; I snatched up one-eyed Potato and mounted him on the classroom flagpole.  This time he was about 9 feet up, out of reach for his own protection.

As the children walked in the next morning, they were quick to notice the crow, but hesitant to get too near.  “Is it real?” Amelia asked.

“That wouldn’t be safe for the kids, right?” she replied, keeping a wary peripheral eye austerely on Potato.  By now Amelia had started a buzz in the room. “I think it’s real!” she’d tell each classmate as they walked in.  And the children believed. Sometimes grabbing onto one another, often quietly, they would take turns studying him. They would tilt their heads just a bit and pause to stare, not getting too close.

Not wanting to squelch the fun, I simply announced, “His name is Potato.”

Potato became a hot topic in our classroom.  At every meal someone would ask me if he needed to be fed, and at the beginning of the weekend they wanted to know if he would be okay without us.  I told them he felt safer when the children weren’t in the room, and sometimes would fly around.

Just for fun, when the kids weren’t around, I decided to change Potato’s perch to above the door.  It was then that the children noticed his missing eye.  The jig is up, I thought.  But no. Taylor said, “I think my cat did that to him.  My cat likes to attack birds and I saw him get at a crow once.  I think that was Potato.  I think Potato came to visit me.” To which about ten other children had a story to contribute about a time Potato had been at their apartment or house too.  It was believable enough, with crows cawing all over the Portland area. Who’s to say each wasn’t Potato?

And so our game continued.  Each time I thought the game was over, some child would turn to me and say, “He’s not real, is he?” Then another would feign a shock and say something like “I just saw him move! Just a little!”

After school, I would change his location from time to time just to keep it interesting.  His wire feet attachments eventually bent off and I was reduced to using duct tape to mount him, but still the children believed. I was careful to keep him always just high enough that they wouldn’t quite get a good look. They wanted to make him nests, asked if he had family, believed he had gotten out for a bit as we spotted a crow on the playground, and one time, they thought they heard him caw.

One warm June day during story time, the goo on the duct tape combined with my dusty classroom ledges led Potato to the end of his stay and a terrible fate.  Much like a real bird that had suddenly fallen ill, as I read Miss Bindergarten Gets Ready for Kindergarten, Potato plopped dead on the carpet.  There was a collective gasp.  Rather than terrify the children any longer, I promptly confessed the truth of our game. “It’s okay children! He’s not real. It was just pretend!” I was disappointed, but I had no choice but to own up.

By this point they all knew he was pretend, really, but it was then that I realized just how much they didn’t want to know. No one was sad about the prospect of a dead bird, but several were so palpably disappointed about the unintentional end to our game.  They tried to resurrect him. “Maybe he was sleeping and fell?” or “Where’s his brother? Will he be here tomorrow?” They tried.  But it was too late.  The magic of our game was over.

I thought about Potato a great deal as I packed him into the watermelon box last week at the end of the school year. What is it about 4- and 5-year-olds that they can so easily blur the line between reality and make-believe?  How does this serve them? I have come to the conclusion that Potato was just one example of a hundred or more times throughout the year where the lines between reality and fiction were imprecise. This preschool talent allows children to take risks in their learning.  Andrew once wrote a list for me of squiggly lines and said, “It’s in cursive. You can’t read it.”

“Right.” I agreed.  This allowed him to try writing for the first time.

Genevieve presented a string of letters in her journal.  She cautioned me that I wasn’t going to be able to read it because it was in Spanish.  She’d take it home for her mom to read later.  “Right.” I agreed.

Often the kids will feel the need to excuse what they know is somehow not quite right work with statements like “I know there’s more letters in ocean, but I’d rather write that part another day.” Understood.

Pretend can make the writing more meaningful too, as in the time Itzel had simply had enough bickering in the classroom and issued an edict to post on our classroom door: No being mean to People. She told me, “Now it is the law.” In our room, indeed now it was, for it was written down.

In make-believe, as with our visit from Potato, all the children need is each other to live among a community of believers. And really all I have to do is not interfere.  Who’s to say the pretend sink isn’t really on fire, as a child makes a sign saying, Smoke in sink? And who’s to say the homemade speeding tickets I receive frequently from pretend cops aren’t really going to land me in jail?  They write wonderful things on the citation to reprimand me, like No! Katie Wood Ray cites this phenomenon in her book Already Ready, in which she entices reluctant writers to “pretend” to write in order to get started. Here is a beautiful function in play that serves these children so readily in their literacy.

Whether or not Potato will fly out of the watermelon box and perch in our classroom next year remains to be seen.  But in the future I will have my radar up for opportunities to play pretend and deliberately distort the line between fiction and reality. This realization will forever change my time in the classroom with the children. This is an exclusive talent of young learners that must be cherished and nourished before it’s too late; before Potato our pet crow turns to styrofoam. 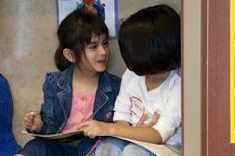 If you work with young children, you know these girls. Olivia is a pink princess, given to tears and fanciful tales of slights from classmates. Maggie is a tomboy who struts around in zombie t-shirts and doesn’t suffer fools gladly. The two meet like gladiators in the preschool playhouse late in the school year. 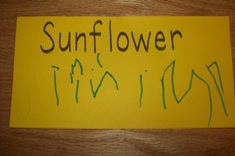 How do preschool teachers help their young students seem themselves as writers?  Leslie Woodhouse explains how she works with students early in the year, and provides many samples of starting points for three- and four-year-olds. 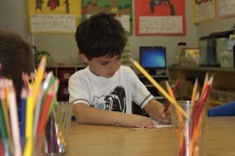 Why is Leslie Woodhouse so forgetful? It’s all part of a not-so-devious plot to teach her preschool students the power of creating and leaving notes throughout the classroom. 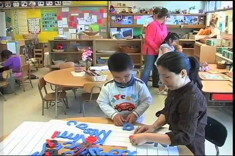 Centers can be an effective teaching and learning strategy in preschools. In this video, Melissa Kolb shares her rationale for using centers in her Head Start classroom with video examples of centers. 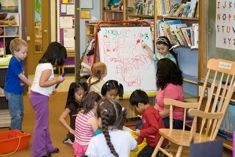