There is a secret that writers know about grammar: it’s the power of the right-branching sentence. It’s easy to navigate for novice and expert writers alike, and on top of that, it bolsters explanatory writing.

What’s a right-branching sentence, you ask? A model from Jim Arnosky’s Creep and Flutter shows us one type:

Honeybees create hives, labyrinths of wax honeycomb in which they store honey and raise their young.

A right-branching sentence begins with a simple sentence, clear and direct: Honeybees create hives, which in this case is followed by a noun, labyrinths, and prepositional phrases that describe what the hive is made of and what the honeybees do in the hive. The added information extends the information in the original sentence. Grammarians would say it modifies the main clause (the sentence); they’d even insist on labeling it an appositive. But for writers the name is not the focus, it’s what it does: the additional information adds detail and explanation to the preceding sentence.

When a novice writer is asked to add detail or more explanation to a sentence, they often overcrowd the original sentence with modifiers of the adjective and adverb kind: There are many buzzing honeybees that carefully and skillfully create complex hives. The right-branching sentence says, Hold on. Let’s just leave a simple direct sentence upfront alone. We’ll add the modification to the right, branching off real detail that actually reveals more information rather than overstuffing our main clause with words that don’t do work.

But the appositive isn’t the only kind of right-branching sentence authors use. Let’s check out Loree Griffin Burns’s The Hive Detectives

There are three types of adult honeybees: drones, workers, and queens.

Why create another sentence after the first? You can simply end the sentence with a colon and add a list.

The oldest workers are the field bees, who spend their days collecting nectar, pollen, propolis, and water for the colony.

That’s right, Burns also uses a serial list to pack in even more example. The serial comma has always been an elegant way to stack examples or details in explanatory writing.

Drones are male bees; they are smaller than queens, with rounder abdomens and enormous eyes that meet on the top of the head.

Your inner grammarian might be getting panicky. It is true that right-branching prepositional phrases aren’t always set off with commas. But this one is, and they often are. This is just the beginning of how grammar moves can enhance our students’ explanations. The more you notice, the more you use, and the more you use, the more flexible writer (and teacher of writing) you become.

The next article in this series will deal with another useful explanatory grammar move that can add voice: verbals in the house!

Jeff Anderson is known simply as the “Write Guy” to his legions of teaching fans. He draws on his extensive background as a teacher and staff developer in his popular books, videos, and workshops. You can learn more about his work at: http://www.writeguy.net/ 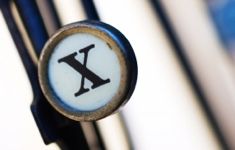 Jeff Anderson launches a new series on explanatory writing, a topic of high interest to teachers now because of the Common Core.

Jeff Anderson explores the difference between informational and explanatory writing, and what that might mean for teaching craft moves to students. 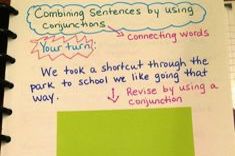 Explanatory Grammar Moves: Getting Verbal with It

Jeff Anderson concludes his series on explanatory grammar moves by exploring participles, included in the Common Core eighth-grade standard covering the use of verbals. 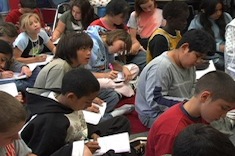 In this lesson with her sixth graders, Pam Pogson talks about a goal many students have mentioned during writing conferences: editing for conventions. This brief lesson gives everyone a chance to brainstorm common errors and fixes. 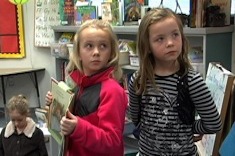 Linda Karamatic is launching a unit on punctuation with her second graders which includes mentor texts, inquiry, and anchor charts.