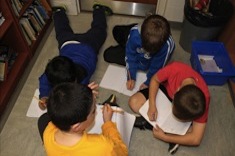 Belinda was feeling rather discouraged. She had just finished reading drafts of her students’ argumentative writing. After several minilessons and conferences, most of her fourth graders were still not supporting their position statements, especially the struggling learners. Perhaps the problem was the topics. Only a few of the students had generated their own topics. The rest had relied on the cliché topics that Belinda had provided as examples, such as school uniforms, no homework, and later bedtimes — nothing that they were strongly passionate about. Feeling resigned, Belinda planned the minilesson for tomorrow’s writing workshop based on what she had noticed in the latest drafts.

The next morning, as Belinda was rereading her uninspiring minilesson plan, her students exploded into the classroom. They were all talking at once, every one of them terribly upset. “What happened?” Belinda inquired.  Olivia replied, “At a school board meeting last night, they voted to stop Halloween celebrations in school. No parties, no parades, no costumes!” That was the most language that Belinda had heard from Olivia all year! Olivia was one of the struggling learners in the class. She was new to the community and hadn’t made any friends yet. Olivia’s coping strategy of choice was to attempt invisibility. She was very quiet. She never volunteered in class, always sat slumped in her seat, and didn’t interact with the other students when she worked in groups. She mumbled through writing conferences, and Belinda had to strain to hear her monosyllabic responses. She wrote in the tiniest handwriting that Belinda had ever seen.

“It’s not fair,” the students wailed. Belinda seized the moment. She instructed the students to put their jackets away and gather on the carpet. There, the students took turns talking about how they felt about the school board’s decision. They related how much they had looked forward to Halloween since the first day of school. Some of the students’ mothers were already in the process of making their costumes. Others talked about window shopping at the costume store in the mall. They shared memories of Halloween celebrations from as far back as kindergarten.

Belinda asked if anyone knew why the school board had ended the Halloween celebrations. Once again, Olivia spoke up. She and her mother had attended the meeting in order to request an additional bus stop closer to Olivia’s house, so she had heard the whole debate. Olivia reported that the school board was concerned about:

Belinda quickly jotted down the reasons on the whiteboard. She was surprised to hear such a well-ordered and articulate description of the issues from Olivia, who clearly had been listening closely at the meeting and had successfully retained the details in her memory overnight.

Belinda told her students that the school board had presented a good argument to the community that Halloween should not be celebrated in school. They had given four specific and well-founded reasons for their position, which they embraced with passion. Their reasons showed that they cared about the students. They wanted the students to be healthy and to spend their time in school learning, and they didn’t want any students to feel left out.

Belinda suggested that the class write to the school board in an effort to present the positive aspects of Halloween celebrations in school. The students loved the idea. Belinda loved it, too. Here was an authentic reason for using argumentative writing. She could cash in on the students’ passion to help them understand the importance of providing support for a position. Rather than having the students write individual letters, she’d do a shared writing letter to demonstrate how to construct an argumentative essay. The school board was more likely to read a single letter than 25 of them. In addition, by means of the collaborative process, they could finish the letter in a few days; individual letters would take at least a week.

Shared writing is an instructional strategy in which the teacher and the students collaborate in writing a message. The teacher acts as the scribe and mediator. Shared writing is appropriate for students from kindergarten to middle school.  Depending on its purpose, the length of the message can vary greatly, from as short as a few sentences to as long as a complete, multi-page story or report. Individual shared writing sessions are short, ranging from 5 to 15 minutes, so it sometimes will take multiple sessions to complete a piece.

Shared writing entails a high level of teacher support, but the level of student control is also significant. Shared writing is in the “we do” portion of the continuum of gradual release of responsibility. In the hands of a skillful teacher, shared writing uniquely enables students of widely differing ability levels to all be working within their zones of proximal development.

In most cases, the first step in a shared writing activity is for the students to gather together near the place where the shared message will be recorded. At this gathering, the teacher and the students negotiate about what they are going to write (topic, format, genre, etc.). It works well to have the students sit on the floor in front of the chosen place; a rug makes this more comfortable. Belinda chose the whole class meeting area for the shared writing lesson, but in her case it was unnecessary to gather the entire class there because the topic and format had already been agreed upon.

After the initial gathering, the students are divided into triads, and time is provided for them to engage in some prewriting discussion of their ideas for the shared writing message before the whole group takes on the task. In Belinda’s case, where the initial gathering was skipped, she began the entire activity at the triad stage.  Doing this prior to the whole class discussion serves several purposes:

The students who worked with Olivia welcomed her into the group and valued the insights that she had to share. For the first time, Olivia actively participated in a group activity.

After the prewriting talk, most shared writing groups reconvene on the rug, but Belinda’s class convened there for the first time. They generated a web to capture the groups’ ideas. They decided that their letter would have three parts:

Belinda pointed out that they had engaged in prewriting and stressed the importance of thinking and planning before writing — the better the planning, the better the writing. As she was saying this, Belinda guiltily recalled the measly amount of time that had been devoted to the argumentative essay drafts that were now sitting on her desk.

Before they ended the first day’s shared writing session, they worked on an opening sentence. Belinda thought it was important to have at least the start of the letter posted to maintain the students’ enthusiasm. It was also an opportunity to stress the importance of openers to capture the reader’s attention. Together with the entire class, she listened to the students’ ideas — and, as a group, they selected the following opening sentence for the letter.

We were devastated to learn that a Grinch has stolen our Halloween celebration.

The idea of the “Grinch that stole Halloween” had been Olivia’s. Belinda made a mental note of Olivia’s familiarity with Dr. Seuss’ books. It was now up to Belinda to physically record the chosen sentence (to be followed eventually by the rest of the shared message), and she grabbed a sheet of post-it paper for that purpose. A variety of media can be used to record a shared writing message, including a chart tablet, a sheet of chart paper, a chalkboard, a whiteboard, a smartboard, or word processing software with an LCD projector.  If you use a chalkboard or whiteboard for drafting the message, you’ll have to transfer it to paper. Revisions and edits are easily made with the high tech options (smartboard or word processor/projector). If you take the low-tech route, you’ll need a marker for writing and correction tape to make revisions or edits. Regardless what medium is used, it is crucial for all students to be able to see the writing; this entails, among other things, making certain that the writing is large enough.  After the opening sentence was recorded, the shared writing session ended for the day.

Over the next three days, the class worked on writing the text of the letter. This entailed approximately equal amounts of talking, writing, and reading. When the group agreed on a sentence, Belinda would first say it out loud and then write it down, saying each word again as she wrote it.  Then the group would reread the sentence. If someone thought that the sentence should be revised, they would need to say how it should be revised and explain why the revision would improve the letter. After each sentence was finalized, with or without revisions, they went back and reread all of the written text before going on to the next sentence.

Shared writing requires “in the moment” decision-making.  Belinda’s emerging knowledge of her students’ strengths and limitations helped her make good decisions. The shared writing lesson moved along at a brisk pace to maintain a high level of student interest and engagement. Several teachable moments emerged during the writing of the letter, but in order to maintain sufficient continuity, Belinda didn’t interrupt the process to address each of them; she planned to revisit the letter for additional instructional opportunities in future minilessons and conferences. The letter was an authentic writing experience, not just an exercise. All the students got to sign the letter, and it was sent to the school board office.

This story has a happy ending — there were three positive outcomes. First of all, the school board decided to allow the Halloween celebrations to take place for the current year and appointed a committee to study the issue for upcoming years. Apparently, there was an enormous outcry from the community. The school board was besieged with letters, phone calls, and emails of protest. Belinda’s fourth graders believed that it was their letter that brought about the decision. Belinda was happy to allow them to believe in the power of their writing.

Second, the fourth graders went on to write much better argumentative writing essays. Many of them abandoned their previous efforts and started anew. They increased the amount of time spent on prewriting by brainstorming topics and scouring the local newspapers and the Internet for ideas. They talked to each other about issues that were really important to them, and they made progress in planning and writing improved essays.

Finally, Belinda learned that shared writing is a powerful instructional practice for supporting and including struggling learners. Since Belinda was “holding the pen”, Olivia was free to actively participate in composing the message; she did not have to struggle with spelling and other writing conventions. Although she had trouble reading and writing, she apparently had no difficulty with spoken language. Shared writing provided Olivia with the opportunity to watch spoken language appear before her in print. Two of the sentences that Olivia had contributed ended up in the final copy of the letter.  Due to the multiple rereadings of the letter, Olivia was able to read it without assistance. With the freedom from dealing with the written word, Olivia came out of her shell.

Editor’s Note:  This is an excerpt from Shari Frost’s book Rethinking Intervention: Supporting Struggling Readers and Writers in Grades 3-6 Classrooms