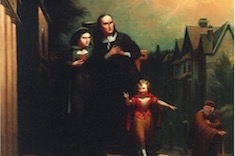 A picture is worth a thousand words—we’ve all heard the old adage. As a language arts teacher, I am apt to believe that this isn’t always the case, but it’s an interesting thing to consider when we think about what counts as “reading.” Looking closely at a painting or a piece of art—or any type of media, for that matter—can be much like closely reading a written text. There are opportunities to notice an artist’s choices and techniques and to, in turn, analyze the effect they have on the meaning of the piece as a whole. I have found ways to incorporate art into my classroom for a variety of purposes: to analyze literary elements, such as theme, tone, and characterization, as well as to introduce students to unfamiliar concepts. The best part is that art is a great access point for all of my students. Even my most struggling reader feels confident looking at a painting and noticing what the artist is doing. On the other hand, art is often subjective enough that even my gifted students can be challenged to interpret it.

An interesting connection between art and literature is that there are many famous paintings that depict scenes and characters from literature. When my class is reading The Scarlet Letter, I show them the painting of the same title by T. H. Matteson. The painting portrays the scene in which Dimmesdale joins Hester and Pearl on the scaffold in the middle of the night and a meteor creates the semblance of a red A in the sky. Nathaniel Hawthorne knew Matteson and provided insight into how he thought the characters should look. Matteson also consciously tried to illustrate the symbolism in Hawthorne’s work in the painting through a variety of techniques.

I display the painting on my smartboard, as well as give each student a color copy for close inspection, and begin by simply asking, “What do you notice? What parts of the painting seem as if they hold a deeper, symbolic meaning?” Students home in immediately on the way the A appears to be floating in and out of the clouds, as well as the artist’s distribution of light and dark colors, and the features and look of each character’s face. After our initial noticings, I challenge students to take their observations a step further and make a claim about what a particular technique can tell us about the tone or theme of the painting.

Another strategy that connects art with literature is to examine several paintings that portray the same subject and look at how each artist interprets a character. One of the puzzling things about the character Ophelia in Hamlet is the manner of her death. Students always want to discuss whether her drowning was simply an accident or something more serious, like suicide. To help give students some perspective on this topic, I use a lesson that I came across in Jim Burke’s book 50 Essential Lessons. I present students with three different paintings depicting Ophelia at the river just before she drowns: Ophelia by John Everett Millais (1852), Ophelia by Arthur Hughes (1851), and Ophelia by John William Waterhouse (1894).

Again I ask students to describe what they notice about the artist’s choices. In particular, I ask them to pay attention to the use of light and dark in the painting, the arrangement of Ophelia’s body, and any other details that the artist uses to characterize Ophelia without words. After we discuss the students’ findings, I ask them to write a paragraph that makes a point about the character Ophelia, using details from both the paintings and the text of Hamlet. In this way they are using evidence from the paintings to support their claims about the character, but they are also tying it to the original text.

Before beginning a study of poets of the Romantic era, I realized that students didn’t have an understanding of the term romantic as it is used in this sense. Their thoughts went immediately to candlelit dinners and sappy cards, which had nothing to do with the poetry we would be reading. I thought it might be easier to explain the principles of Romanticism by showing students some art from that period. I chose to use Theodore Gericault’s The Raft of the Medusa, which represents the aftermath of a horrible shipwreck that occurred in 1816 in which more than 100 people were set adrift on a hastily constructed raft. The occupants were stranded for 13 days and only 15 survived, but even they suffered from dehydration and starvation. If there were ever a painting to dispel those images of red roses and Valentine’s Day cards, this is it.

As in all of the other lessons, I ask students to closely “read” the painting.  After we have discussed the painting in relation to student findings, I move on to explaining the major principles of Romanticism, which we then connect to the painting. Students can point out how those principles are portrayed in The Raft of the Medusa. Starting with art in this case is much more effective than simply giving notes or a handout explaining Romanticism. After connecting the content to a piece of art, students have a visual image to attach to each tenet of the genre.

Art is an easy access point to get students thinking and talking about a “text.” In this way, a visual text can act as a scaffold for the more complex skills that they will use when reading. In turn, each of the activities described will easily move students into argumentative, literary analysis and expository writing, as their work with the pieces of art can shape their future writing. Not only this, but in today’s world where our students are continually bombarded by visual images and messages, any practice that helps them think more critically about what they see is worth the instructional time. 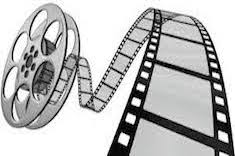 “Are We Gonna Watch the Movie?”

Gretchen Schroeder finds her high school students are always eager to see the movies related to the novels they are reading in class. Yet it rarely makes sense to show the entire film. She explains how to choose clips judiciously. 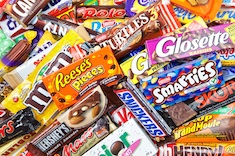 Gretchen Schroeder ditches the long discussion of rules and procedures with her high school students, and instead gives writing workshop a sweet start. 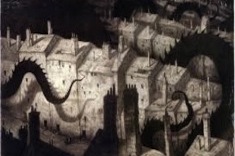 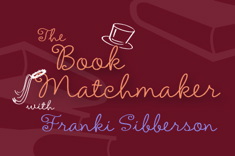 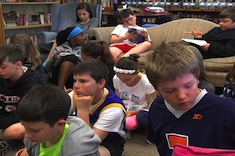 Quick-Write with a Video Prompt

Katherine Sokolowski refreshes the quick-write routine in her fifth-grade classroom by using a video as a prompt. 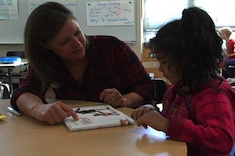 Bitsy Parks shows how even the simplest picture book can lead to powerful conferring. In this example, a first-grade English language learner is reading a picture book that uses only two words in the text.