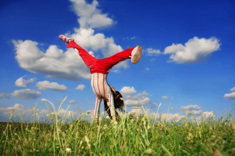 Five-year-old Kennedy started kindergarten this fall. She has regaled me with stories of the other kindergartners' antics, her favorite offerings from the school cafeteria, her teacher's read aloud book choices, and her upcoming plans for show-and-tell. When I asked about playtime in kindergarten, she looked at me incredulously and announced, "We don't play in kindergarten." My heart sank, although I really wasn't surprised. Kindergarten teachers are under more and more pressure to ensure that all of their students enter first grade as readers. The current demands of the kindergarten curriculum and increased testing requirements have squeezed playtime out of the schedule. So instead of housekeeping corners, blocks corners, puppet theaters, paint easels, and dress-up centers, many kindergarten classrooms now have textbooks, desks, and chairs.

So how can teachers satisfy a kindergartner's need to play and still address the ever-expanding kindergarten curriculum? Here are some ideas:

It started out innocently enough. A child gave me a plush toy of the mouse featured in the book, If You Give a Mouse a Cookie

(Numeroff, 1985) as a holiday gift. I responded positively and gave the toy a place of prominence on my desk. Before I knew it, I had over 50 plush animals and picture book "action figures" nestled in every available nook and cranny in my classroom. I thought it made my classroom a more literacy-rich environment.

I would always take out and display the toy when I read aloud the story featuring the character. My first graders quickly developed the habit of grabbing the toys off my desk and bookcases when they were reading the book that featured the character. Initially I thought the children were "just playing." However, closer observation revealed that the children were using the toys to act out the story. Their play included retellings of the story and sometimes creating new episodes and adventures for the character. What teacher wouldn't love that kind of engagement with a story? No worksheets or tests are necessary – the child definitely comprehends the text.

Playing with the Alphabet

One cornerstone of the kindergarten curriculum is letter recognition. All early literacy assessments include a letter recognition component. Put away those flashcards and worksheets. The best way to involve children in learning the alphabet is through play. There are numerous computer games, board games, and card games available. The appendix of Words Their Way: Word Study for Phonics, Vocabulary, and Spelling Instruction (Bear, et al., 2007) has lots of blank game boards and suggestions for creating letter recognition games. Laminate any game that you make to extend its life. Google "alphabet recognition games" and you'll get over 100,000 hits.

Seek out large motor activities for letter recognition instruction, too. Get those kindergartners up, out from behind desks, and moving around. Many kindergarten classrooms have rugs featuring the alphabet. Give the children bean bags and let them toss the bean bag to the letter that is called. After games supervised by the teacher, the children easily can play this game on their own, making it a good choice for an independent activity while the teacher is working with a small group.

I often see oval-shaped rugs with the letters around the perimeter in kindergarten rooms. This is the perfect prop for a musical-chairs-like game. Have the children march around the rug while a song is playing like the alphabet song. Stop the music. Select a letter card from a deck (a great use for those alphabet flashcards). The children standing on that letter must sit on the inside of the oval. Play a few more rounds, continuing for as long as their attention spans will allow. Engage the "sitting children" in singing along.

" as their poem of the week. As I was leaving, I told Stacy that hearing the children read the poem brought back fond memories of jumping rope when I was a child. The next time I was in the building, the coach told me to stop by Stacy's classroom. The poem displayed was "Miss Mary Mack: A Hand-Clapping Rhyme

." When Stacy saw me, she asked the children to find a partner and show Dr. Frost what they had learned that day. The children enthusiastically chanted "Miss Mary Mack: A Hand-Clapping Rhyme

" and did the accommodating partner hand clapping.

Stacy's kindergarten spent the next six weeks using traditional street rhymes for the poem of the week. The children learned hand clapping, ball bouncing, or rope jumping for each poem. Stacy made word sorts with the prevalent phonograms in the rhymes. The coach gave her copies of the big book Ten Little Actors: The Big Book of Finger Plays (Lloyd, 1989) and Miss Mary Mack and Other Children's Street Rhymes

Many five-year-olds struggle with handwriting. Nothing brings on tears of frustration faster than a fight with a pencil to get those letters to fit on those lines. Before they have to face pencils and lined paper, let children gain some experience forming letters in non-threatening, playful formats. Sometimes, I see Magna Doodles and magic slates in kindergarten writing centers. These toys give children a risk-free place to practice those tricky letters. When a child is done, s/he can proudly display his/her best effort rather than a page full of smudges and erasures. Some teachers invite children to make letters from clay. The child makes a snake (long coil of clay) and forms the letters. On a nice day, head outside with a bucket of sidewalk chalk to practice forming letters.

Really brave kindergarten teachers have been known to cover a table's surface with wax paper and dump a bowl of chocolate pudding on it. Children dive in and practice forming letters. Shaving cream can be used as a cleaner alternative, but teachers need to keep an eye out for children who find it hard to resist the urge to take a taste.

Froebel says that the work of childhood is play. Finding opportunities for children to infuse play into your literacy activities will help them to be more productive and make kindergarten a more joyful place. 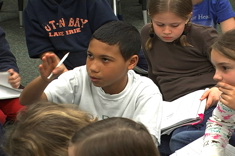 Franki Sibberson brings fun into word work through the use of picture books with her 5th graders. 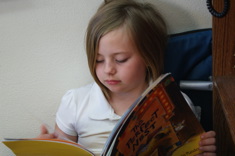 Shari Frost describes how literacy coaches shadowed children to get a sense of how much reading students were doing. 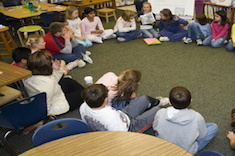 Here’s a booklist of delightful titles that will build fluency skills for students — both as read alouds, and during independent reading.