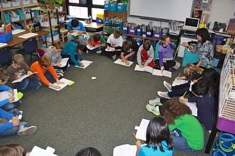 Letting Go After Holding on Tight: Reflecting on the Last Days of School

Teachers will tell you that the end of the school year means several weeks of never-ending to-do lists, the scary prospect of packing up a room so walls can be painted and carpets can be cleaned, and trying to find the time and energy to finish the pile of waiting assessments, passports for each beloved student that allow them to move on to the next grade. What teachers might not share is this truth: it is not the to-do lists and paperwork that makes us frazzled and out of sorts at the end of the year.

What is the honest reason that the final days of school are tricky for us? Answers are revealed when you least expect them.

On the last day of school and first evening of summer vacation, I settled in to watch a hockey game on television with my family. It was Game 7 between the Boston Bruins and Tampa Bay Lightning in a much anticipated playoff series. Five minutes into the second period, a Tampa Bay player named Steven Stamkos took a horrible hit to the nose with a rocketing puck. If you are interested in the gory details, here is the video clip.

It was the kind of hit that made the crowd silent and everyone stand up to see if he was okay. I found myself standing up, reacting aloud to my family, as his teammates and trainers rushed him off the ice to the locker-room for repairs. And I do not typically talk to the television.

"You are such a teacher and mom." My husband commented as he nodded at me, sitting next to me on the couch and sipping his favorite beer. He is not a teacher, but he is an expert on teacher behavior after living with me for so many years.

"What does that have to do with hockey?" asked my daughter who was sprawled out on the floor, following the moment-by-moment stats provided by her NHL GameCenter app on her iTouch. "What do you mean?" I asked.

"It's all good . . . but did you hear yourself?" he said patiently. "After Stamkos was hit, you leaped off the couch as if you could go pick him up, just like you do when you have a hurt kid at recess. Immediately, you were talking to him through the television and tried to calm the situation by telling the trainers what to do. You complimented Stamkos as he got up himself, telling him he would be okay.

If you had been at the game and nobody was there to stop you, I bet you would have slipped down to the ice with a big handful of napkins or your sweater to stop the gushing blood. As he was escorted down the tunnel to the locker room, you wondered out loud if his mother was watching and if she would or should be called after the docs assessed the damages. You repeated over and over that the hit was an accident, a bouncing puck that hit him — a common risk in hockey. You would then go over and reassure the player that caused the puck to bounce up and hit Stamkos in the face that it was all just an accident.

And now you will worry for the next few minutes if Stamkos should be allowed to return to the game or if he should be taken to the hospital. Then you will question the decision either way it goes. Once the game continues, you will wonder how it will affect his teammates, and I know in the morning you will be checking on his status to see how serious Stamkos' injury is. You will not let this go until you know he is okay. And he isn't even your favorite player. This is the way of teachers, and this is the mom in you."

As he settled back on the couch after this matter of fact explanation and I sat staring at him, startled by his observations he added, "And whether taking care of everyone around you is a teacher thing or mom thing . . . it is one of the many reasons I love you."

You cannot argue with that kind of logic, can you? We clinked glasses once again, toasting summer vacation.

Hard Endings: A Natural Part of the Teaching Cycle

His words made me think about why the end of the year is so tricky for teachers. It is not the to-do lists or the paperwork . . . teachers are experts at navigating the end of the year checklist that releases them to summer vacation. Packing up the classroom is a secret engineering feat shared by teachers. The hard part is simply letting go of our children.

All year long, we encourage our kids to shine as learners, and we nurture kids experiencing heartbreak at home. We pick up injured children off the playground and fix them with hugs and band-aids. We celebrate the learners who overcome challenges, and we constantly worry if we did enough to help each child discover their talents. All year long we wish we could remove all heartache and troubles from our students' lives, so we do our best to make the seven hours of the school day a safe, caring experience. Teachers believe each child needs to be valued. It is the nature of teaching and the life force of motherhood or fatherhood . . . we feel that if we care enough and work hard enough that we can truly help each child. This is why we are tired at the end of the year. We have given so much to our kids and now we need to let them go.

I sat with my class spring picture in hand, looking at each child and thinking about how each one had changed and added so much to our learning community throughout the year. I marveled how each one had moved forward in his or her learning life. I knew that I had given all that I could to help each child be ready for the adventures that were waiting ahead . . .

Before I could start to second guess myself, my husband took the photo from my hands and said, "The third period is ready to start . . . it is okay to let this school season end. You have a whole new group in just a few short weeks. There will be plenty of coaching for you to do then, so enjoy right now."

He's right. Whatever your ritual is for helping you end the school year, be sure to honor it. Give yourself permission to worry, to marvel, and to make wishes for each of your students as you bring closure to the final days of school. Celebrate all that you did for the children in your life this school year and then jump into the joys of summer. Celebrate like you just won Game 7 of the playoffs and are headed to the Stanley Cup. Summer is short and deserves to have every minute savored and treasured.

And for the record, I sure hope that someone let Mrs. Stamkos know that someone who cared about her son approved his return to the game and that Steven is going to be okay. He is old enough to be my son and I would expect to know the details. I guess it is a mom thing . . .

For the past 30 years, Andrea Smith has learned with children in Texas, Colorado, and Indiana before finally landing in Ohio. Her third and fourth graders spark a new energy for teaching, and she is grateful to spend each school day with so many fascinating learners. 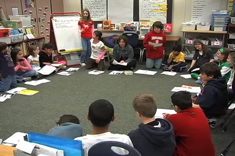 Read Alouds for the Last Days of School

Choice Literacy readers share some of their favorite read alouds for the last days of school. 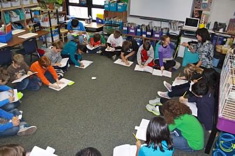 Beginning with the End in Mind: Planning Ahead for Closing Activities

Choice Literacy readers share their favorite end-of-year activities that circle back to events from the start of the school year. 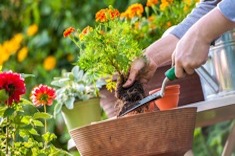 A Case of the Perennial Annuals

Suzy Kaback remembers saying goodbye to her first group of students as a young teacher.