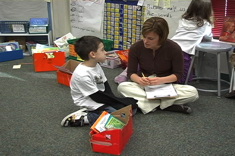 Primary grade children must develop the strategies they will need to learn how words work, to read for understanding, and to make sense of different text structures and genres. Finding the right instructional mix to support such independence is a balancing act between support and expectation, responsibility and practice.

About a week ago I was talking with my colleague Kim about her teenage daughter's experience with the swim team. She shared the woes of her time spent at long meets, but then elaborated about the positive experience she has had watching her daughter improving and strengthening her ability as a swimmer. My friend said that in her daughter's eighth-grade year, understanding how to be a swimmer has just clicked. Kim explained that her daughter has independently been making healthy food choices, making sure she gets rest, and setting goals to beat her individual times. At the end of our conversation, she looked at me and said, "You can't tell them how to do it; she just needed figure it out on her own."

I think the independent "figuring it out" piece is what we want for all our students. Kim's daughter has learned how to be a swimmer, but we haven't seen all the behind the scenes support that has helped her get to where she is today. I also have students who have clicked as readers, writers or maybe even learners. The behind the scenes work of supporting kids is what I think eventually helps kids embrace the independence on their own.

Evan is a first grader in my class who loves science. He brings in contraptions (like cups with string in which he has played with sound vibrations) and stories of experiments he has created at home to share with the class during morning meeting quite frequently. He embraces our science exploration time and is fascinated with nonfiction. But Evan has been not as interested in learning to read.

Evan entered first grade in August with little confidence in reading, stamina for reading on his own, or motivation. Just this month, I have seen Evan "click" as a reader. What do I mean by click? For Evan it has meant selecting books that he has an interest in, learning to participate in a reading community with his peers, and reading the pictures and text independently. He has also started to talk with me excitedly about what he is reading and plan for what he wants to try next. When I saw him pick up the Robert Munsch basket and read Moira's Birthday

on his own, I knew he was beginning to feel brave and independent.

It was the "behind the scenes" work that helped Evan begin to click — a range of messages, activities, and target behaviors that move readers towards independence.

Having quick conversations have been key to helping Evan build confidence, assess his reading needs, and help keep him be accountable as a reader. I often found myself asking Evan about his. What did you do over the weekend? What did you play after school? These questions helped me know Evan and what he might be interested in reading. I also asked him what he was planning to read or what he wanted to read. Many mornings I would get a shoulder shrug, so I took those opportunities to place some books that I had read aloud to our class in his hands.

Since Evan entered the classroom this fall as an emerging reader, I have spent lots of time finding just-right books for him to practice. His interest in nonfiction has influenced my selection of the leveled books and repetitive text I introduce to him, hoping to grab his attention as a reader. But I have also paid attention to what I have been reading aloud to my kids, with Evan's interests in mind. After reading Nicola Davies' One Tiny Turtle

, I knew Evan's interest in turtles was piqued because he talked about his own visit to the beach, and began wondering if turtles had nested where he vacationed. This gave me more specific topics (beach stories, turtles) I could connect him with when showing him books.

Evan is naturally competitive (like a lot of my students), and buddy reading is a surprisingly effective strategy for many competitive students. After reading The Goblin and the Empty Chair

aloud for some practice with predicting in the whole group, I noticed him pick the book up for reading with one of his buddies the following morning. I watched as they read together, thinking about and tackling the text while dissecting the pictures. I don't model or encourage explicit competition with others while learning to read but with these two it has naturally happened. I now find them grabbing books that I have multiple copies of to read together (like Mouse Soup

and Harold and the Purple Crayon

) while building stamina and challenging each other.

Evan has needed my support with helping him identify goals that will help him progress as a reader. At the beginning of the year, Evan and I talked about how important pictures were to reading and understanding, so we set a goal for using pictures to aid his reading of text as a primary strategy. Later, Evan needed me to show him the benefits of using pictures and thinking through parts of words that would help him decode. He was ready for the challenge of cross checking. Now he is putting it all together and focusing on reading fluently. I often tell Evan rereading and practicing books you love (like Elephant and Piggie

) as well as the books we share together helps build smooth, expressive reading. Evan is working toward understanding that reading is thinking. Reading with meaning is at the top of all strategies (and emphasized throughout the day), and Evan's specific goals are helping him with the guided texts I can support him with individually.

Evan needed support with specific strategy work, but also time to practice being an independent reader. Without this time to evolve into understanding what it feels like to routinely grab his book bin, load it with books he loves, read those books, talk with others about them, and then share his thinking (and favorites) with others, he would just be robotically doing reading for others who want him to learn to read.

I didn't ask my friend Kim about how she helped her daughter become a swimmer, but I am sure that she used many of the strategies that we use in the classroom to support readers' independence. She likely talked with her daughter, nudged her, and gave her time to connect with other swimmers, ultimately leading to her decision to identify herself as one. When we take time to talk with students, guide them to finding and choosing books that match their interests and help them set goals; we help them see themselves as readers. 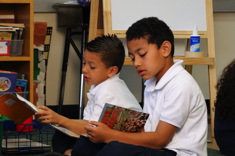 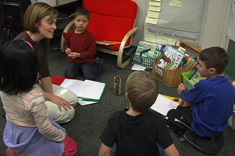 Nonfiction texts require different reading skills than fiction, and you can’t introduce nonfiction genres to children too early. Katie DiCesare shares how she moves between whole-class, small-group, and individual instruction to help all her first graders master the text features in nonfiction. 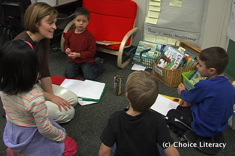 Katie DiCesare remembers books that were fought over among the boys in her 1st grade classroom, and this leads to creating a new basket for the fall on cars and trucks.  She shares a booklist of fun titles in the basket. 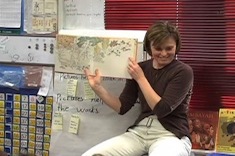 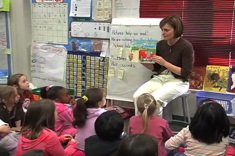 In this video from Katie DiCesare’s first-grade classroom, Katie uses the strategy of rereading to help students look more closely at words—in this case, words that rhyme. 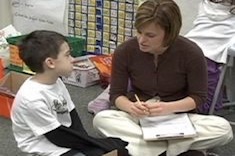 This nine-minute video from Katie DiCesare’s first-grade classroom demonstrates a range of conferring in the midst of writing workshop.