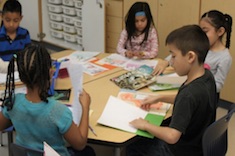 The past few months have been a steep learning curve for me. After nine years in a fourth-grade classroom, I moved to a literacy interventionist position, in which I pull struggling readers who are at least two reading levels below the grade-level benchmark to provide daily reading support. My groups range in size from one student to four, and include first, second, and third graders. Most of the groups meet for 20 minutes, two for 30. The groups follow a guided reading structure.

Although working with struggling readers isn’t new to me, the population (more than 85 percent Hispanic, and the majority of that ELLs) is new to me, so as the teacher, I’m being presented with new challenges. Across the reading levels and grade levels, the students seem to lack confidence in talking about their reading—both literally and inferentially—and sometimes not even sure how to get started telling what they just read. If I were in the classroom, I would use daily read alouds to model and support talking and thinking about texts. The way my groups are structured doesn’t allow for daily read aloud, though, because the students need to have books in their hands and be reading for most of our time together.

I’ve settled on a weekly goal for each group, allowing the goal to spill into the following week or two if necessary, based on how students are doing. That way, we focus on one strategy to support their talking about reading multiple times across the week so that, ideally, there’s improvement in their talk and familiarity with the strategy by the end of the week. Some of the goals I set for groups were

I began with a chart with a hand and p 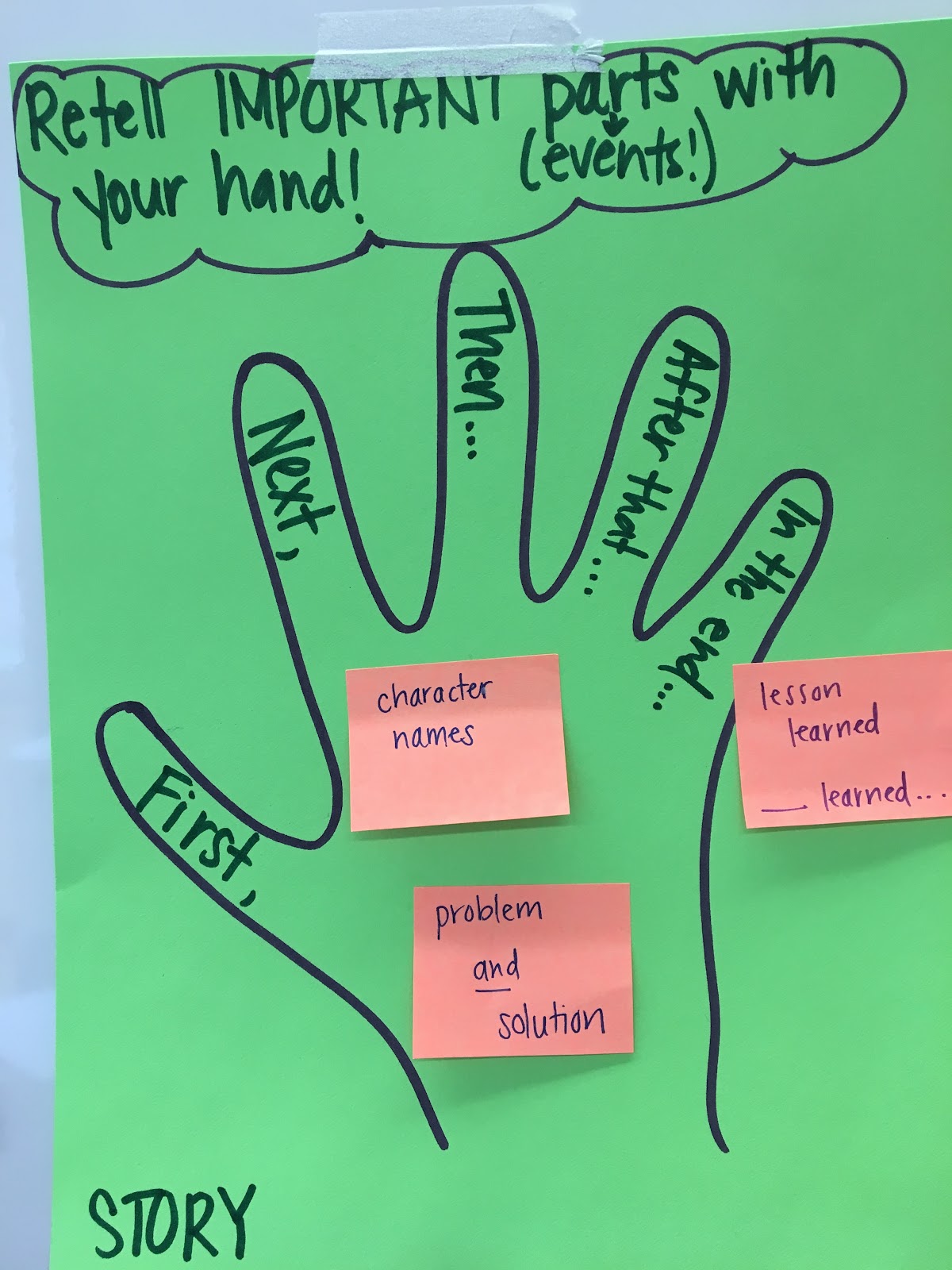 hrases to start talking about the literal events of the story on each finger. I modeled retelling a story with which students were familiar, holding up another finger as I retold five important events across the story so that, by the end of my retell, all five fingers were up. Students held their fingers up along with me as I modeled. After the modeling, students practiced in pairs or alternating with me, using the story that we read that day or the day before. We repeated this across the week until they seemed comfortable with literal retelling of a story.

Once the students were comfortable with telling events of the story in order, I began to add some components to help lift the level of their retelling. The components we focused on were using character names, and adding the setting, the problem, and the lesson. We added one at a time, gradually across a few weeks. I put them on sticky notes and added them to the chart in the middle of the hand (some are pictured above) so I could point to them and remind students to use them during their retell.

Scaffolds for Thinking, Talking, and Writing

For a student who struggled with retelling during a running record, I attached phrases to a ring for her to use anytime she talks about her books. During the running record, she answered questions accurately but wasn’t able to get herself started talking independently about her reading. That is, it was clear to me she had an understanding of the text, because she could answer questions with significant detail, but she was having difficulty retrieving what she read.

The phrases I made on note cards are similar to phrases on the retelling-across-our-hands charts except they don’t set the student up to retell a story sequentially. Rather, they’re more open-ended phrases for the student to flip through so she can choose which ones are appropriate for her reading. There was almost immediate improvement in her talking independently about her reading once she started using the phrases. On a running record only a week later, she independently took the phrases out and confidently flipped through them, using them to talk about what she had read. I commented on how some of the phrases were ones she had already memorized, and said she can use them anytime she’s thinking, talking, or writing about her reading. 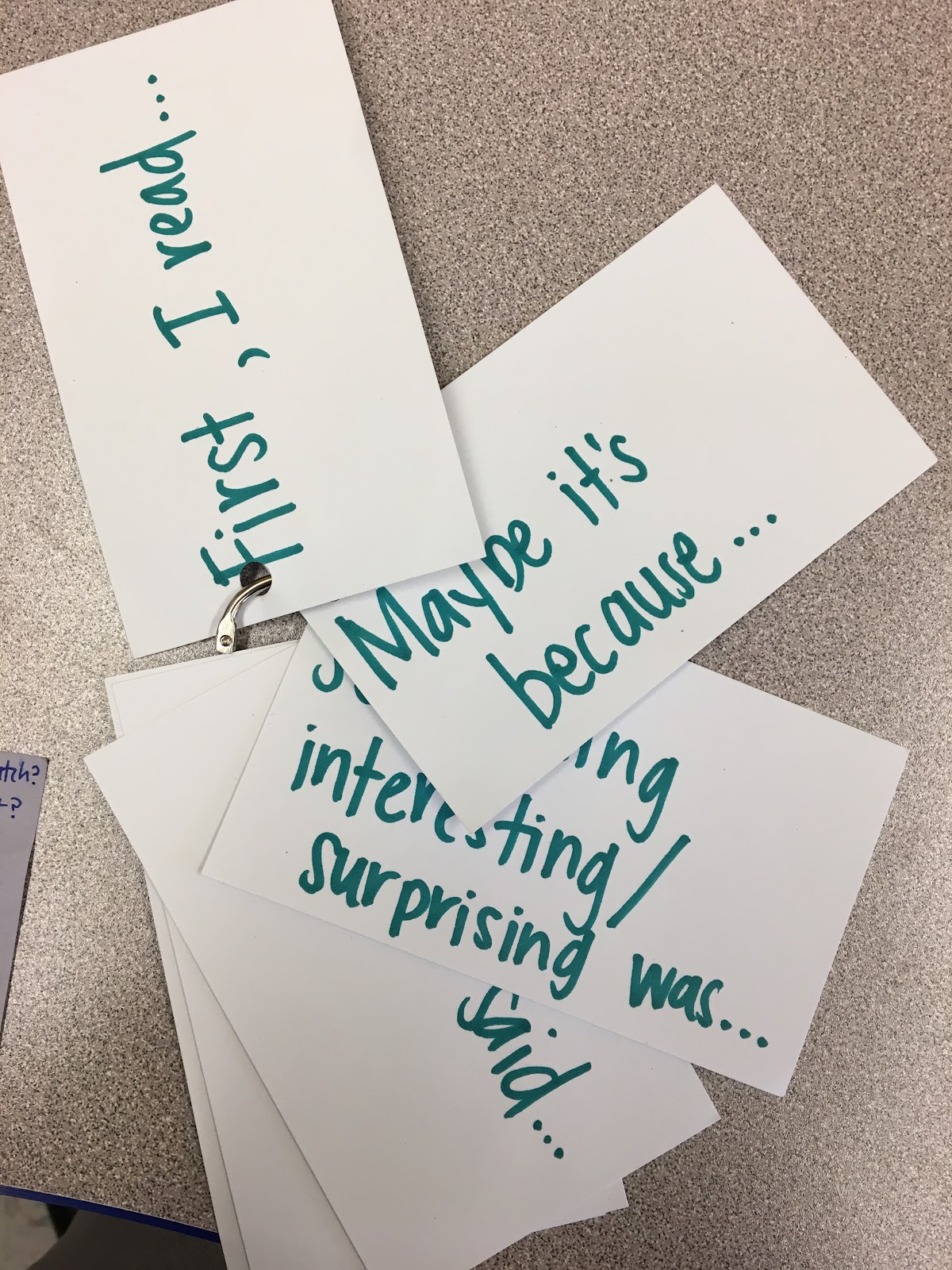 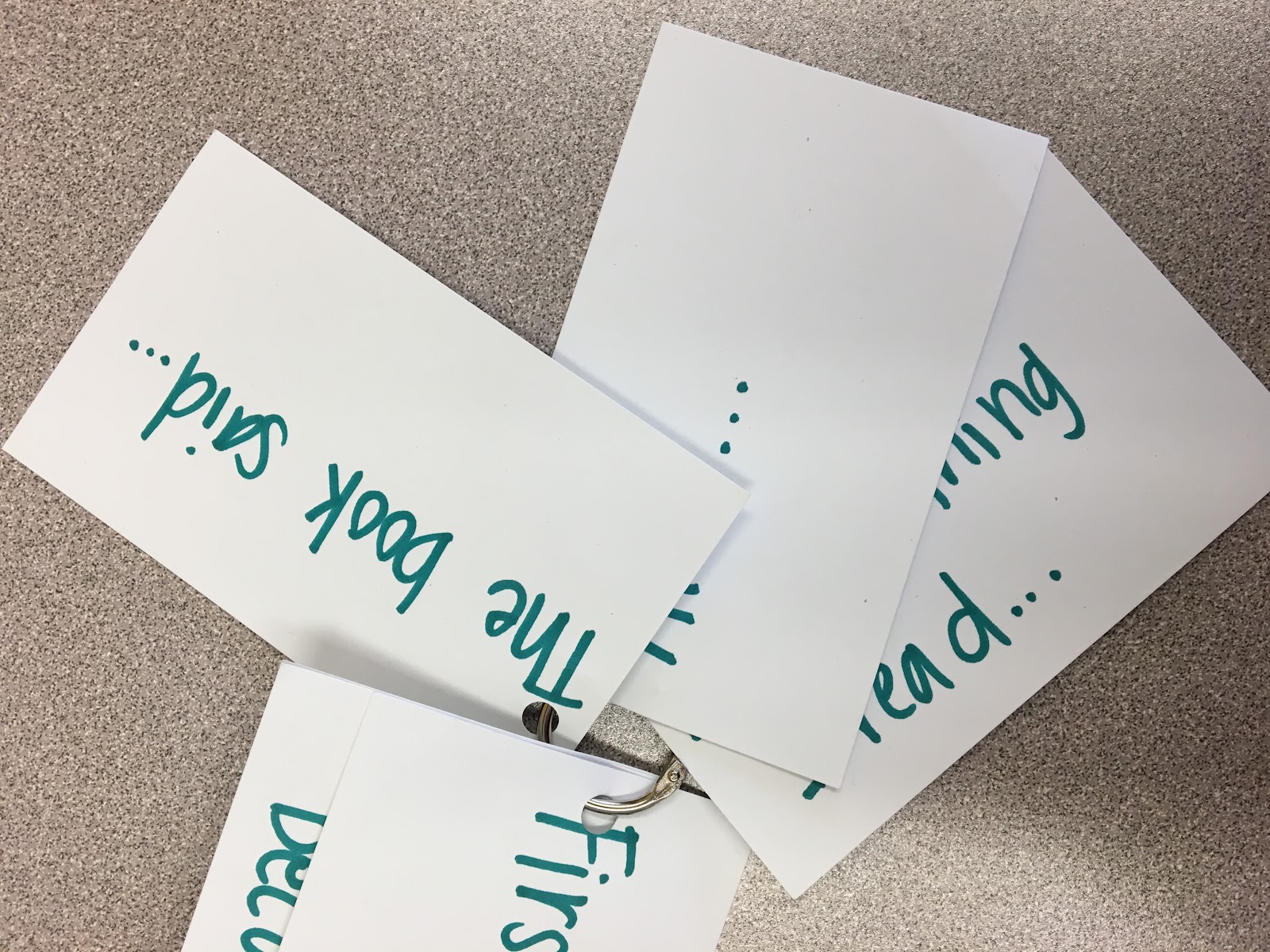 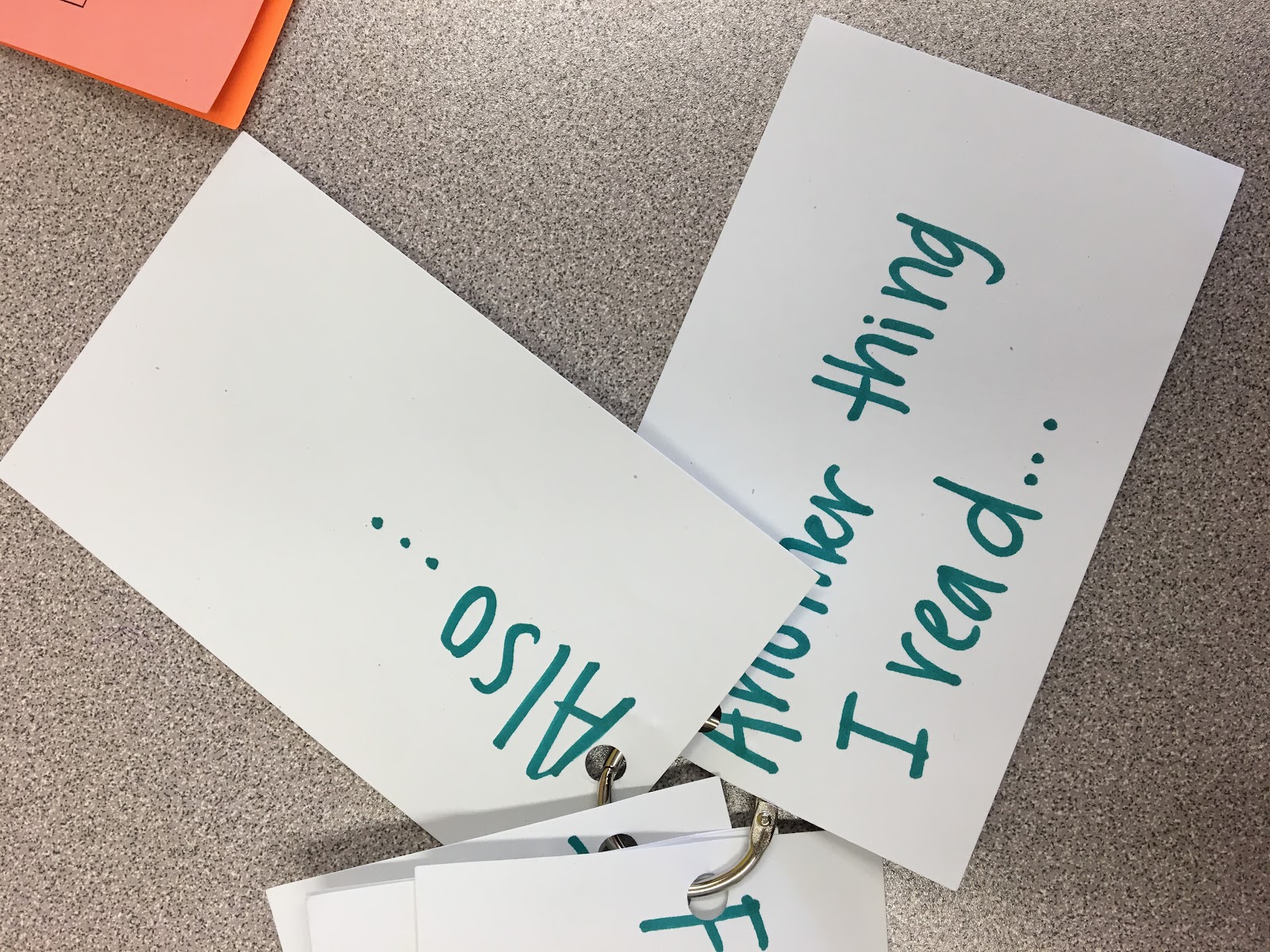 Phrases for Talking About Ideas 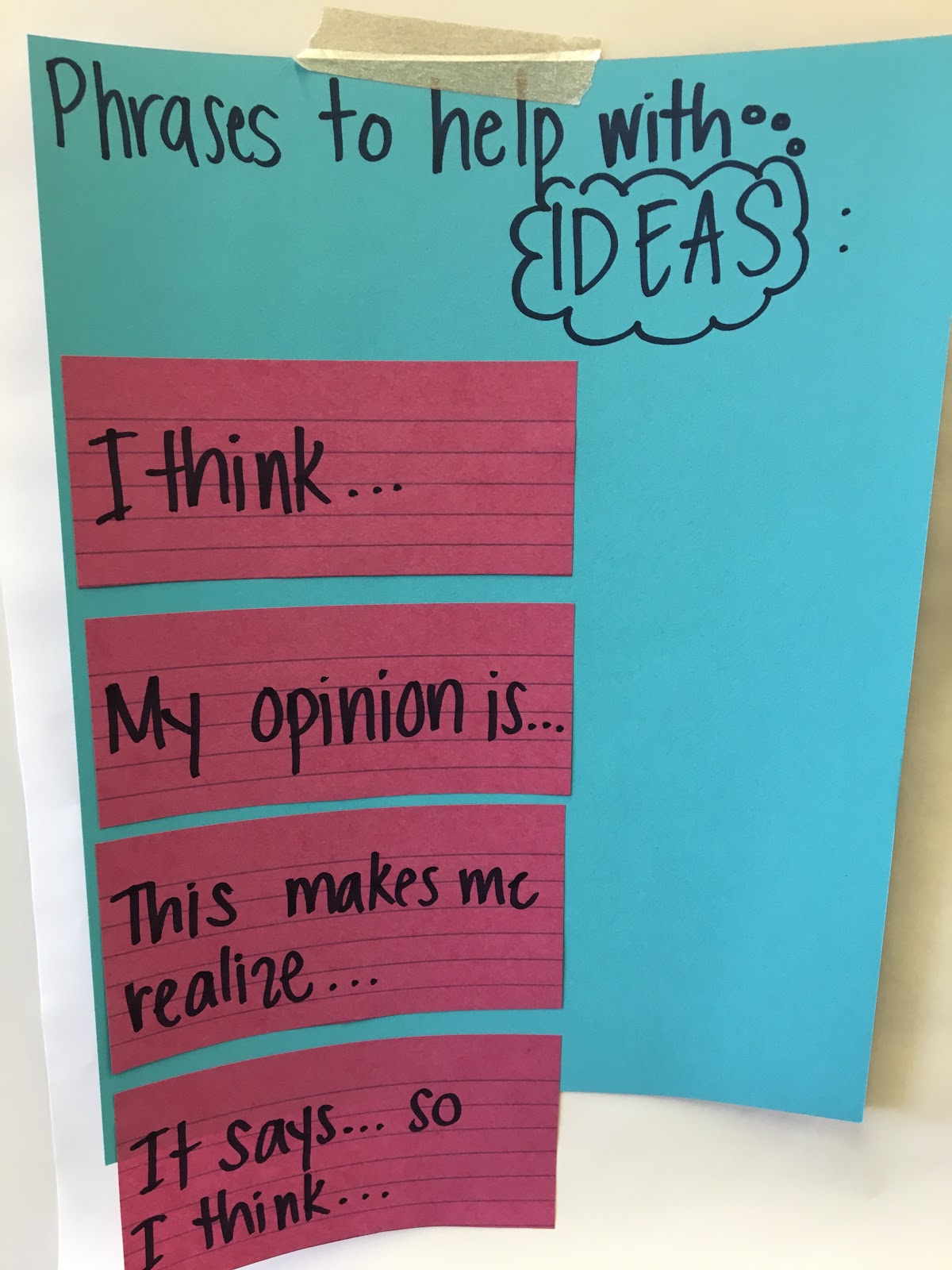 A chart with some sentence starters that lead students from talking about events to ideas has been helpful to refer to during conferences or discussions as a group. When a student retells an important event from the story, I might say, “What does that make you think? Choose a phrase,” and point to the chart. Similarly, I might just answer a student’s retell of an event with one of the phrases from the chart, prompting them to repeat the phrase and then try to finish it with an idea.

Once we began this work in fiction, we tried it in information texts, using some similar phrases: 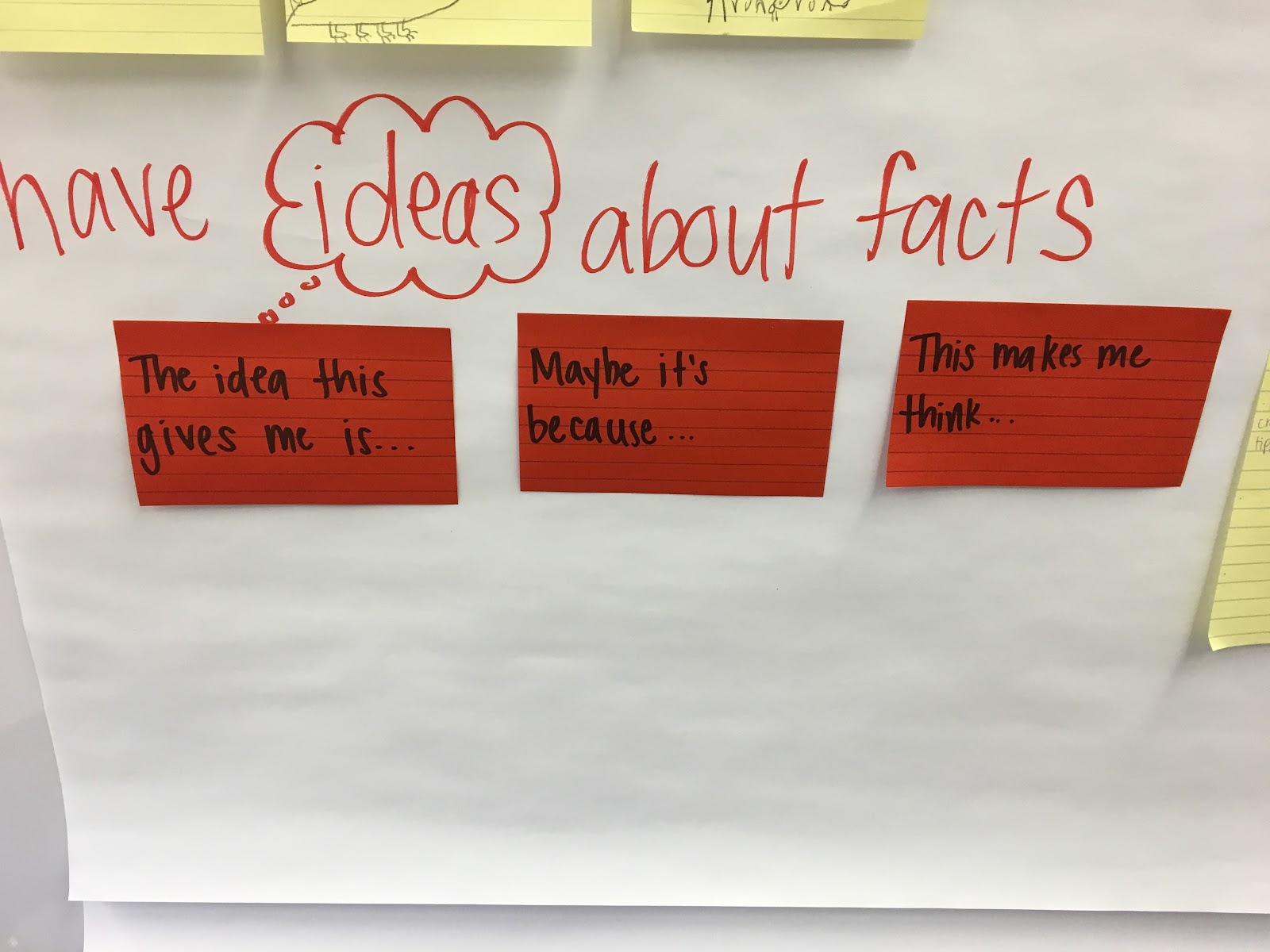 Vocabulary for Feelings and Traits with Pictures

Anytime a student mentioned an idea about a character feeling, I’d give him a sticky note and help him write the feeling down. The student would add a picture to show the feeling and then stick it to a chart. The sticky notes became a resource for students to use when they were talking about their ideas about character feelings. Students later worked to sort the feelings into three columns on the chart, marked with a +, +/-, and -, to show feelings that are positive, negative, and neither positive nor negative or either, depending on the circumstances. Interacting with the vocabulary and organizing it in this way provided an additional support for students and an opportunity to think and talk around the words. 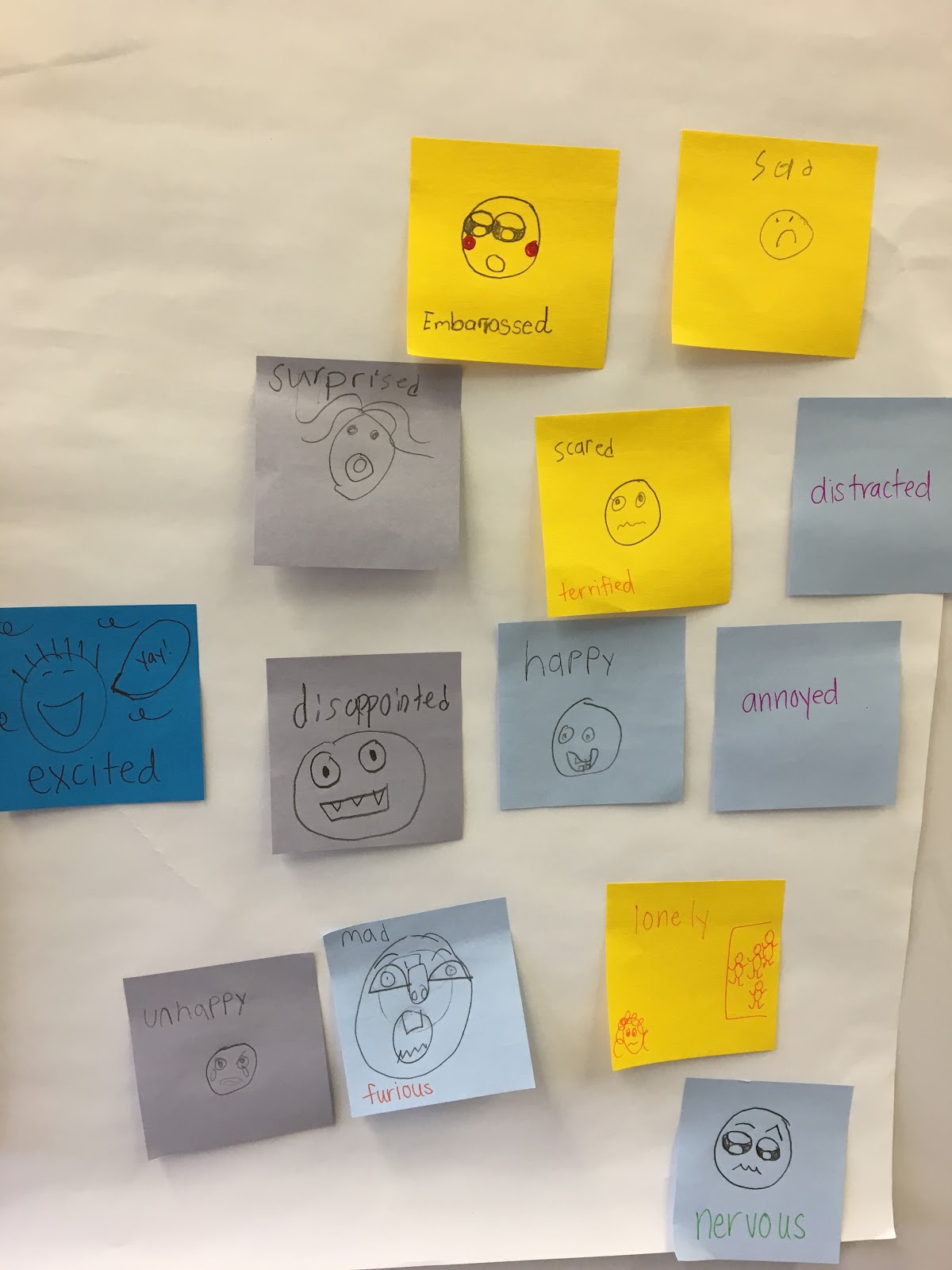 As we read through stories and talked about character traits, I also started to make word cards with the traits in the middle and synonyms in the corner. Students helped illustrate the trait on the back of the cards, and we’d refer to them as we talked and wrote about our ideas about characters. 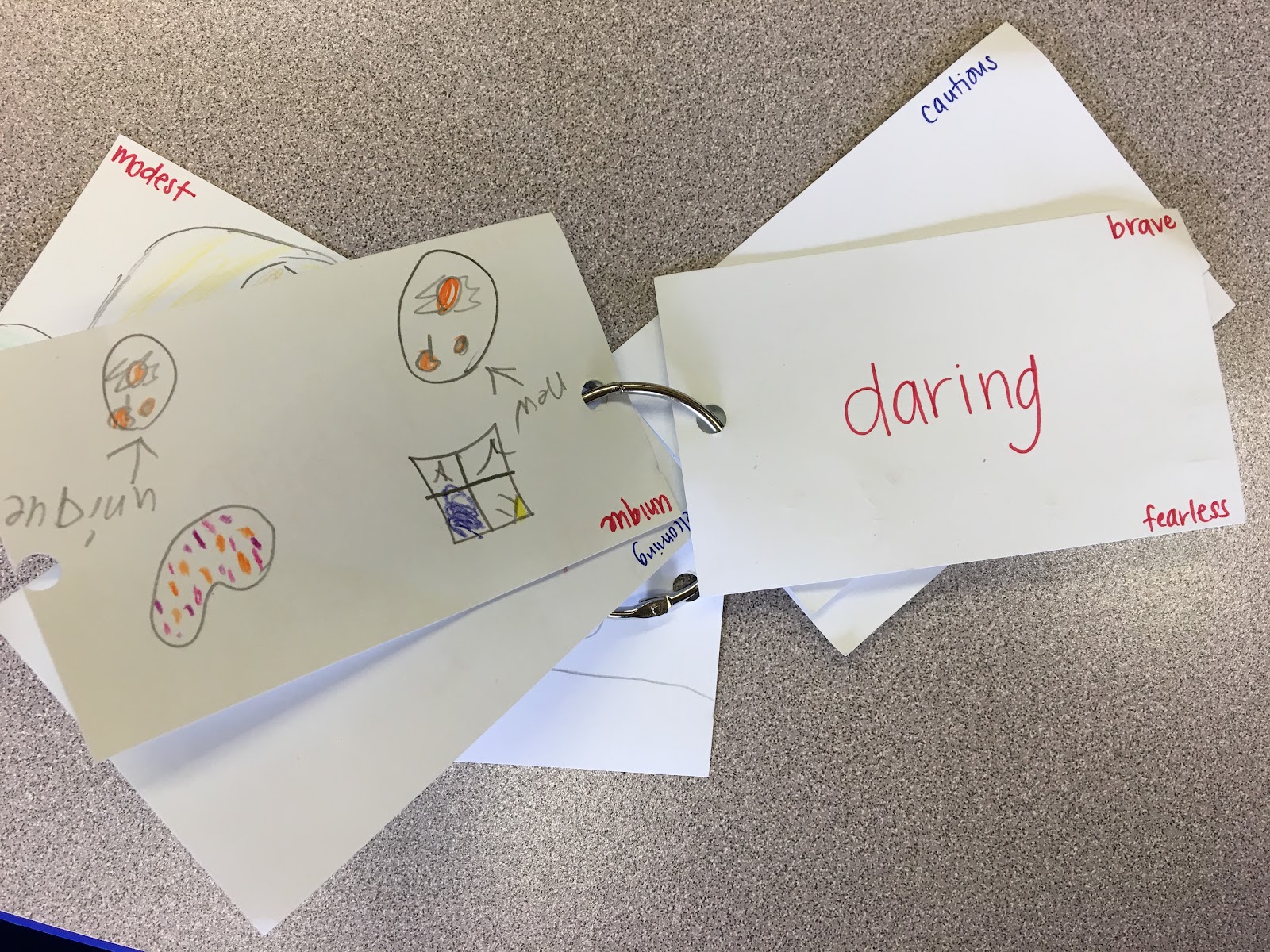 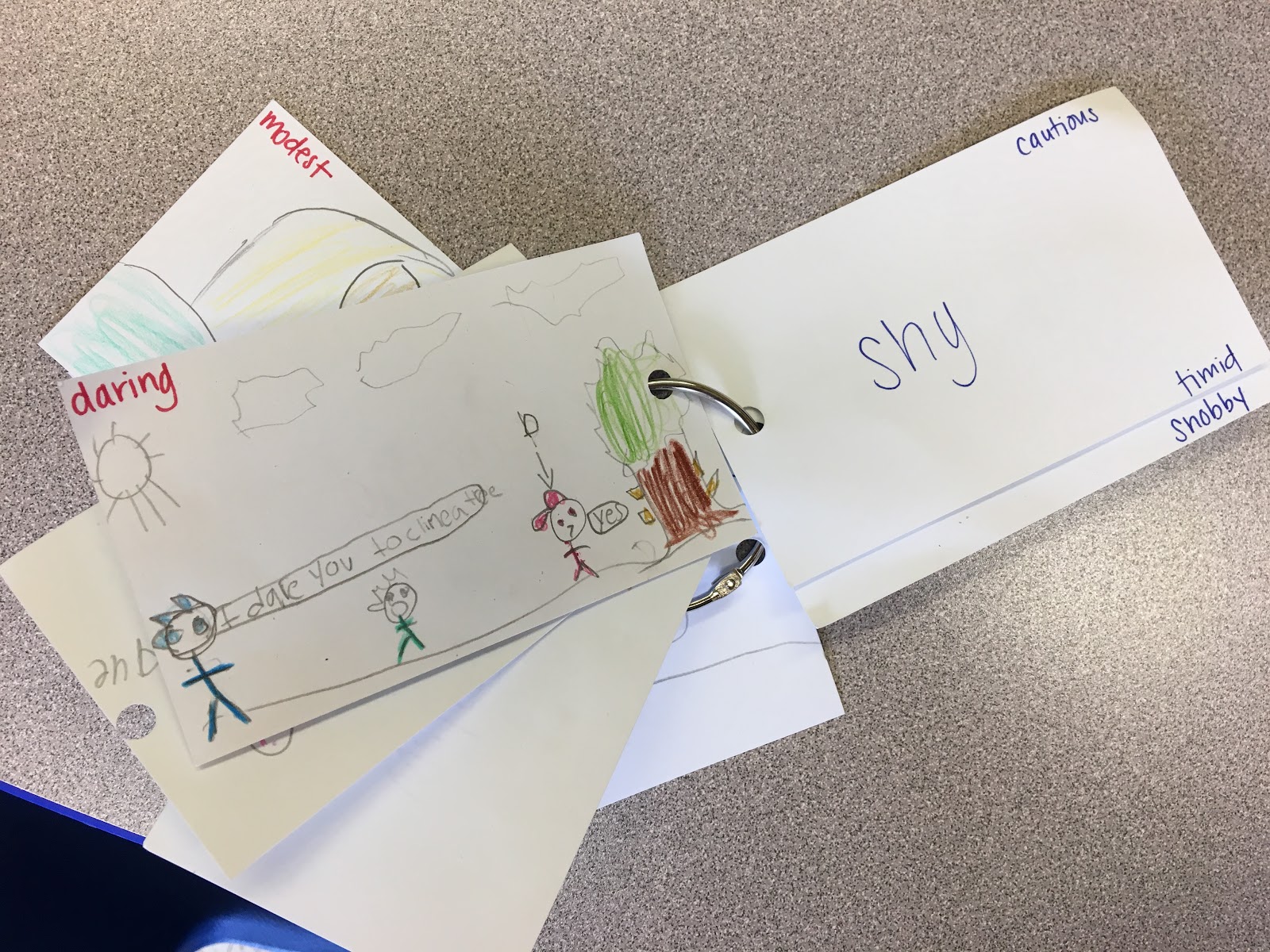 Also on the chart were phrases to help them name an idea with evidence. I tried two different versions of the phrases—some starting with the evidence and others starting with the idea—so that students found one that they were successful with using. 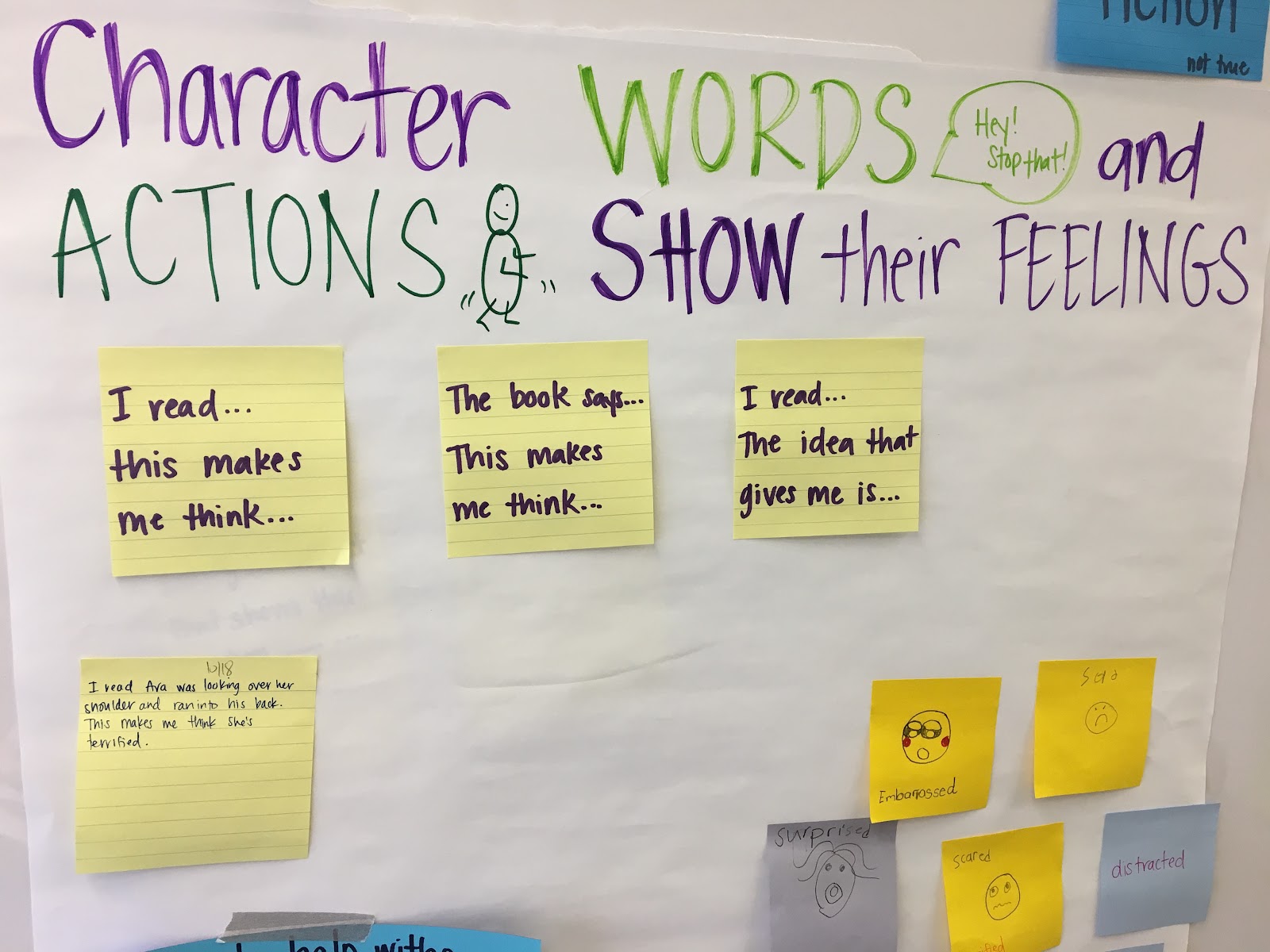 Ring with Lessons, Messages, and Themes

As students read stories and discussed lessons and messages from the stories, I wrote them down on sentence strips and added them to a ring. Since many lessons are true across different texts, students struggling with naming a lesson from the story could flip through the sentence strips on the ring and talk about which lessons fit with the new story we read and why. In this way, the ring became a collection of lessons we’d seen and discussed in texts, but also a resource to support students in thinking and talking about lessons in new books. 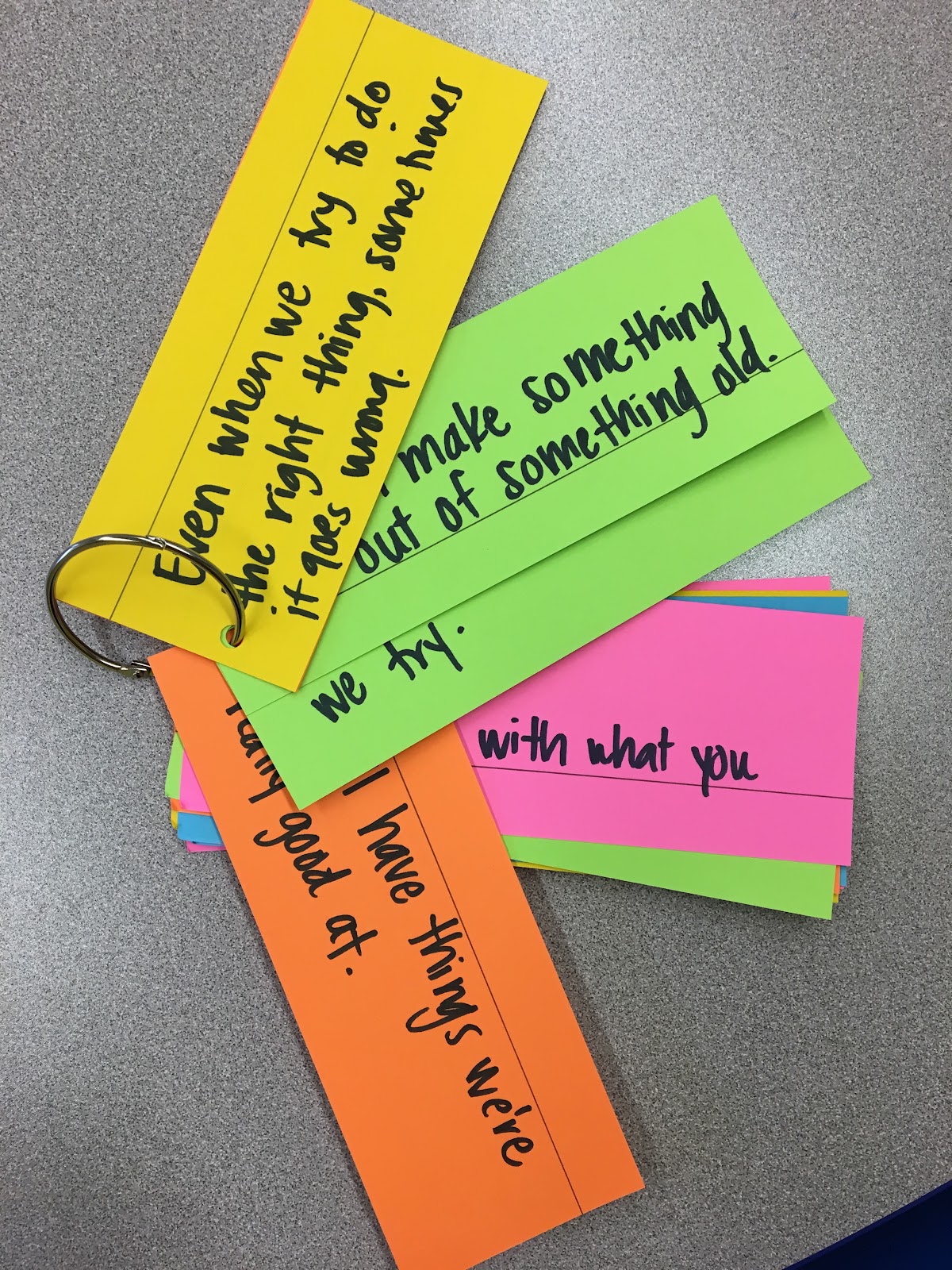 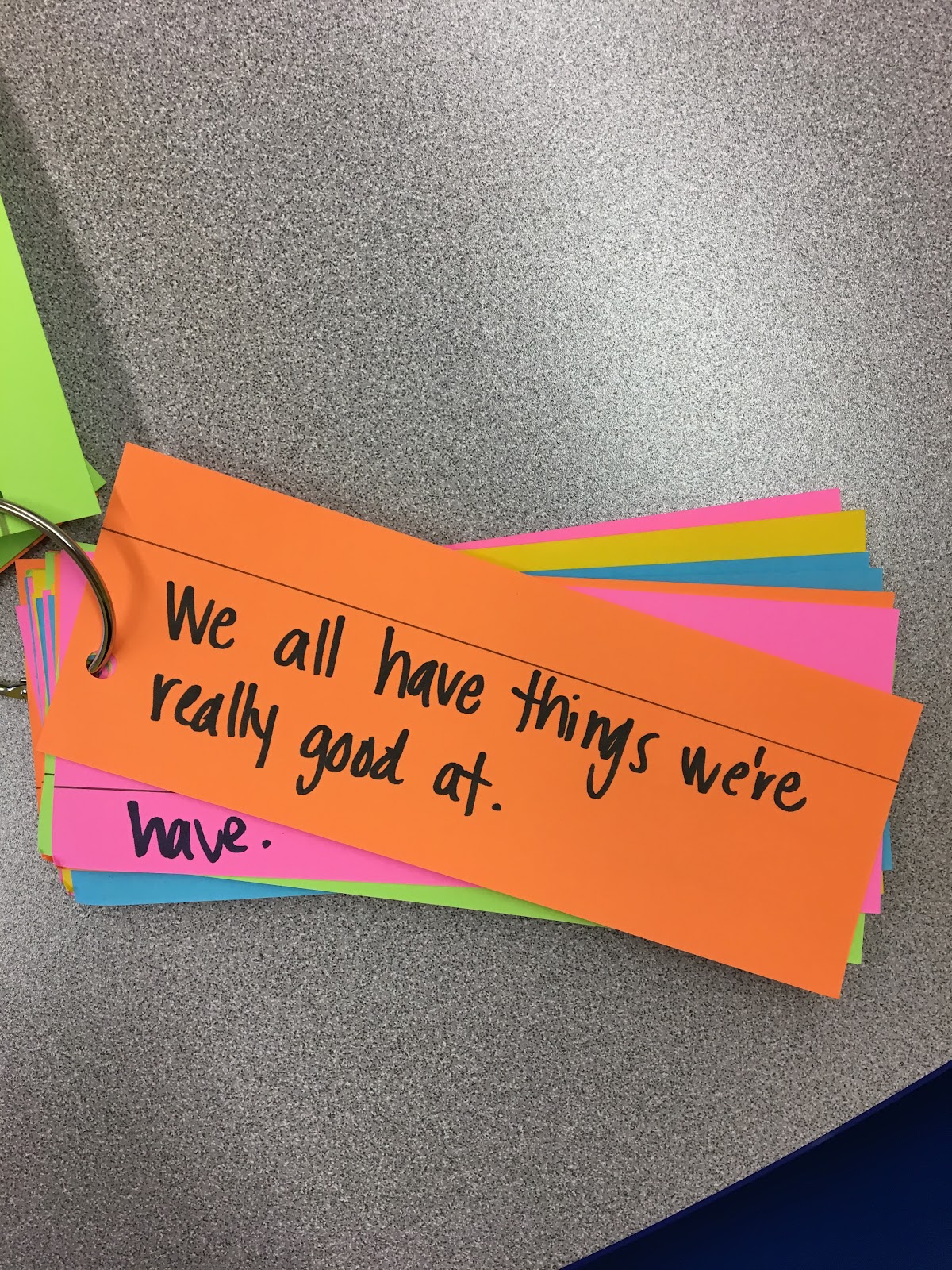 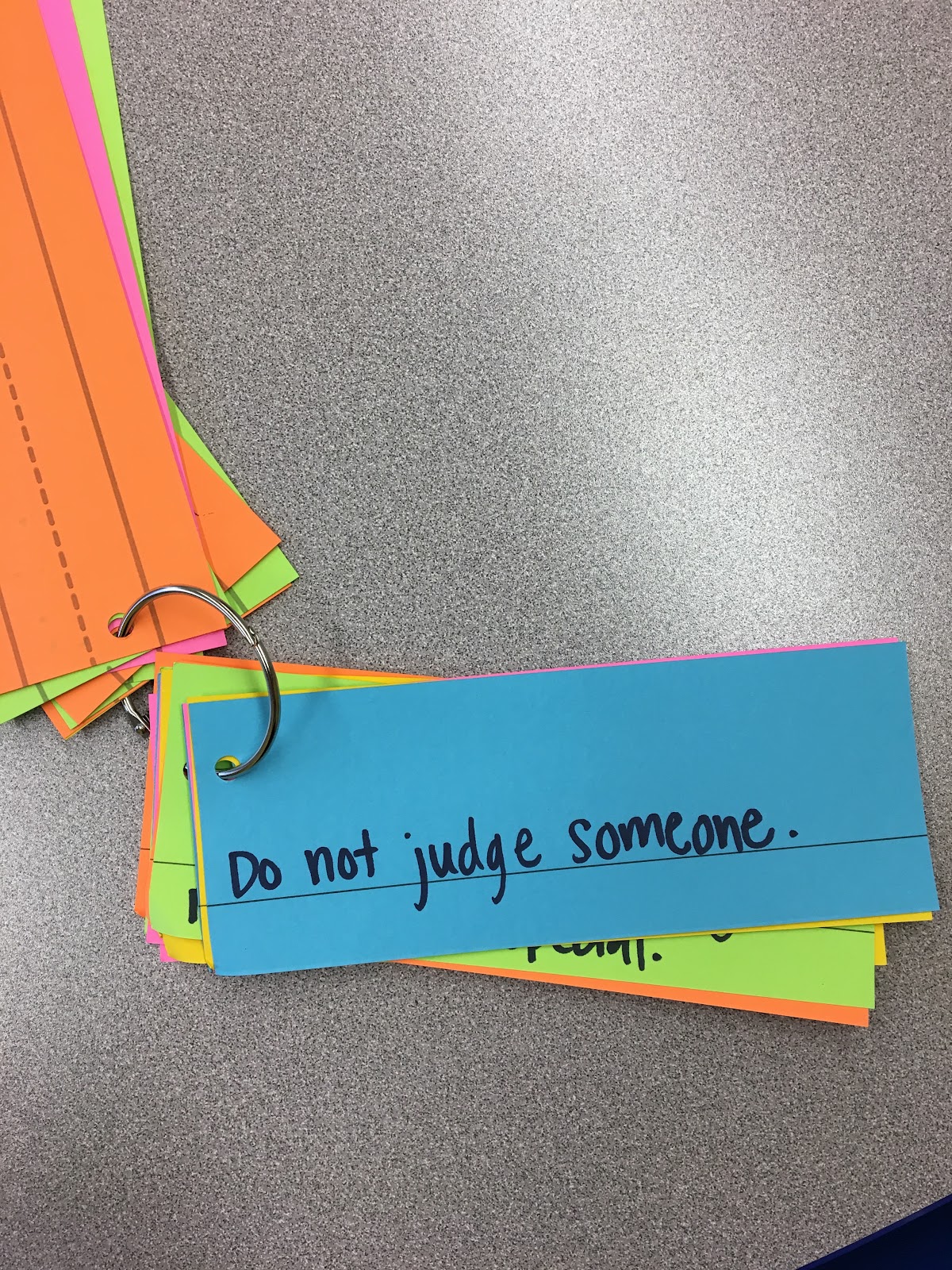 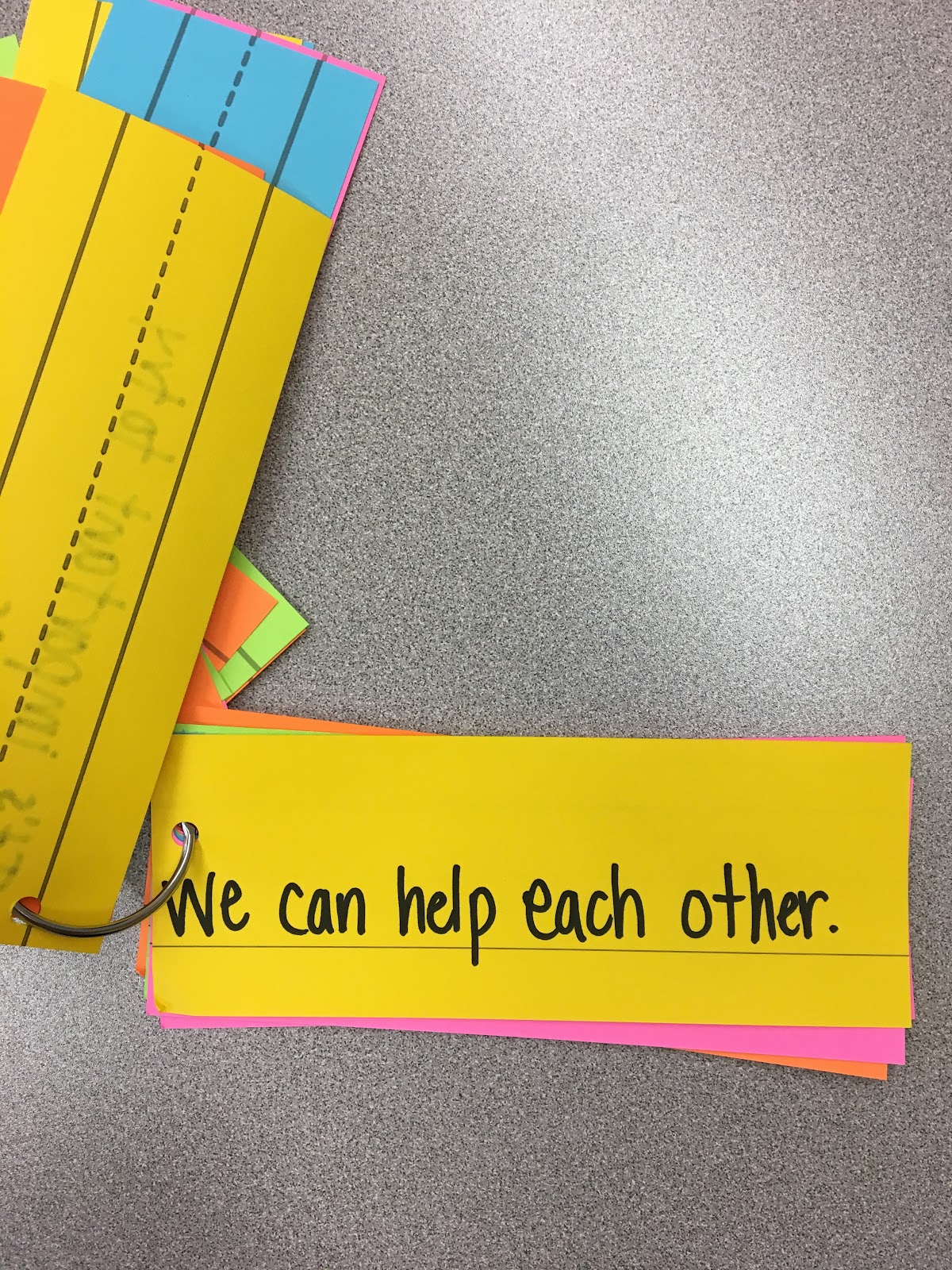 The reality is that many of these goals were revisited over and over again across more than two weeks, and it didn’t work as neatly as focusing on one goal each week. Reading requires using many skills at once, and so rather than being a singular focus for each week, we often ended up doing work across these goals.

For students like the ones I’m working with—struggling with reading or learning to read while learning the language—my ideas about what we’ll accomplish have been overly ambitious. I’m learning that repeated exposure to and use of academic language is an essential part of their language development. After spending a few weeks on retelling using the phrases, students were more comfortable and confident when they talked about their reading. The phrases also became more internalized, which allowed for the scaffolds that the charts provided to be removed so that students began to feel what it’s like to talk about their reading more independently.

Editor’s Note: Tara Barnett co-authored this piece, but since the instructor is Kate, we’ve kept the piece in her first-person voice for clarity of understanding. 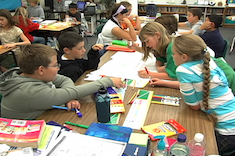 Tara Barnett and Kate Mills develop a process of pre-assessment, careful planning, and systematic recordkeeping to up the value of their small groups. 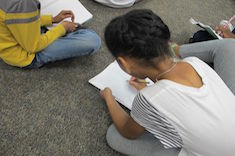 Tara Barnett and Kate Mills share the process of helping students set weekly goals and then reflect on their progress every Friday. 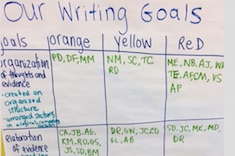 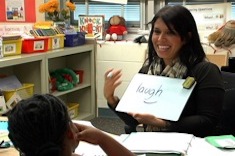 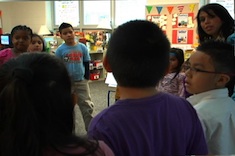 Stella Villalba starts writing workshop with her young English language learners by having everyone share their plans in a community circle. 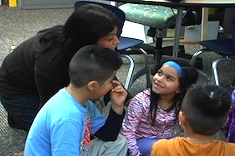 Stella Villalba models nonfiction writing for her first- and second-grade English language learners, and in the process integrates vocabulary instruction into her lesson. This is the first video in a three-part series.