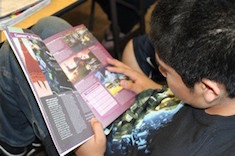 I am always on the lookout for a great picture book to use in a minilesson. One skill my fifth graders struggle with is comparison, in texts, across texts, which often requires close readings. This year I found a perfect picture book to use for comparison and rich discussion, A Fine Dessert: Four Centuries, Four Familes, One Delicious Treat.

This picture book is told in four parts. Taking the same dessert, blackberry fool, we travel through time to see how a family in 1710, 1810, 1910, and 2010 create this dessert to be shared for dinner. In 1710 you are in England watching how a mother and daughter create the dessert for their family. In 1810 an enslaved girl and her mother make it for the plantation owners. In 1910 a mother and daughter living in Boston create it for their family. And finally, in 2010, a boy and his father living in San Diego make the dessert for their friends.

Reading this book I was immediately struck by the items my students could study to see the differences in each part: setting, technology, cooking, and relationships. I decided to give them an organizer to take notes on, or they were welcome to use their notebooks, and then they used those notes to strengthen our discussion surrounding the story.

When my students came over to the carpet, I handed out the following paper to each child:

I explained the premise of the story, and asked students to take notes on anything they noticed during each time period as I read. I also shared that I would be reading the book twice. The first time through, I just asked them to sit back and listen, pencils down, and enjoy the story. The second time through they picked up their pencils and jotted the notes down as we went. I think by reading it twice they were able to simply enjoy the story at first and use the second reading to really home in on the differences that are evident in each section.

For the second reading, I asked students to turn and talk after each section, sharing with their neighbors what they were noticing. The conversation grew heated at times. The girls wondered why the mother and daughter were waiting on the men so often. The children were amazed at the way the recipe grew easier to make and the effect that technology had on the story. Finally, it was fascinating to hear them not only address gender inequalities, but also discuss race and even define what they thought constituted family when we reached the final section.

Wrapping up the book for the second time, I had the students finish their notes and confer a final time with their friends on the carpet about what they had found to be important in each section. At this point, I placed the following sentence under our document camera:

In A Fine Dessert: Four Centuries, Four Families, One Delicious Treat, we follow the experience of making the dessert blackberry fool over the course of four centuries. Below, describe the similarities and differences for each family making this recipe using examples from each section of this book.

I explained that I wanted them to write about this book, comparing each family and how they were similar, but also how they were different. Instead of groans when they heard this assignment, there was a flurry of children rushing to grab a paper from me. They were simply fired up to share their ideas.

What I noticed upon walking around the room to observe the students as they created their essays was that this text structure chunked the information nicely for them. Where paragraphing had been an issue for so many students across the year, it was a non-issue here. They had clear introductions and conclusions. Some chose to write a paragraph about each family with similarities and differences woven in, and others wrote paragraphs about setting, technology, cooking, and relationships. It was some of the most in-depth writing I saw from my students all year. With it as a jumping-off point, they had a concrete reminder when we went to compare other pieces for the remainder of the year. Next year I will use this book as our beginning foray into comparing texts. I think it is the perfect piece to begin that journey with my students. 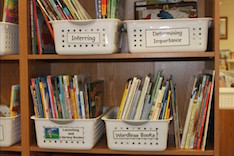 Jan Burkins and Kim Yaris find their reading processes as adults informs the way they view close reading with students. 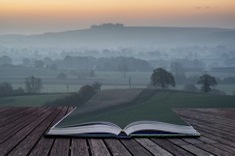 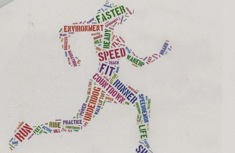