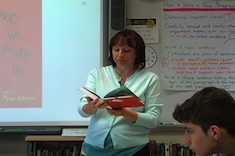 While I was planning a read aloud, a colleague asked me, “What will students be doing while you read aloud?”

I paused, hesitant to blurt out my initial response: Listening. It seemed so obvious that I began to question it myself. How would I know if students were listening? Was quiet compliance really all I expected?

I thought about what it looks like when I do my best listening—when I listen in a way that leads to my best thinking. I listen closely, I take notes, I share my thoughts with others. I enjoy listening in a way that allows me to process the information as I receive it.

An example that came to mind is listening while attending my state’s reading council conference for educators. I participated in the Twitter thread of attendees. As I attended a session and heard a speaker present, I listened closely for thoughts I wanted to hold on to and ideas I wanted to share. Those little nuggets became Tweetable content. The conference Twitter thread is an example of a back-channel conversation. It was a way for participants to hold a real-time conversation about what presenters were saying. Simply by sharing my thoughts in the midst of the sessions, I was able to better remember what I learned and even deepen my understanding through interactions with other participants.

Yet, I was designing an instructional plan that required students to simply sit calmly and quietly. Meanwhile, I hoped they would make sophisticated meaning of a text and hold on to it long enough to strengthen their understanding across an entire novel.

Back Channels in Classrooms

I wanted to find a way for students to participate in their own back-channel conversations during read aloud. My eighth graders have Chromebooks, and there are multiple options for mimicking a Twitter back channel, including a simple shared Google Doc. However, I wanted to avoid having to insert myself into conversations as a manager. Even using a tool like Hapara to limit students’ access to other sites would leave room for temptation to get distracted. I tried to think of a system that would be as simple as possible to manage. I decided on yellow legal paper tablets.

Before read aloud each day, I would invite students to move next to one or two people with whom they wanted to carry on a silent, scholarly conversation about the book. I also invited students who were not interested in “people-ing” by interacting with anyone else to have a silent conversation on paper with themselves. I asked that all students help each other make things work by possibly switching seats to accommodate a pair or trio.

I shared these suggestions for the content of back-channel conversations:

After asking students to clear their work spaces of everything but a writing instrument, I passed out a sheet of yellow paper to each pair, trio, or individual. Immediately, students wrote the names of all participants at the top of the page. I informed them that no matter what was written on the page, it would be collected at the end of class. This allowed me to see exactly what students were thinking.

The read-aloud text was Andrew Smith’s middle-grade novel The Size of the Truth. Although it targets students younger than eighth graders, it requires complex thinking. One reason for the complexity is that the story switches back and forth in time. The protagonist Sam Abernathy fell in a well when he was four years old; that experience surfaces in his memory and affects his life as an eighth grader. To fully appreciate the story, readers have to make connections between two plot lines. In addition, Sam’s story involves a tense relationship with his apparent antagonist, James Jenkins. Again, readers gain insight into the protagonist by making connections between both characters’ experiences.

At the end of class I was curious to see what students had written, which is a mark of a high-quality formative assessment. I have always believed that the best assessments to inform my teaching are the ones I am eager to get my hands on, as opposed to those I am dreading. As I looked over their responses, I noticed much more about what and how students thought about the story than I anticipated. Each day when I read through the back-channel conversations, I identified minilesson ideas, problems to solve, prompts to nudge students to new thinking, and patterns of thinking.

Josefina and Yaritza are strong readers. However, I often need to separate the two of them because of their tendency to have side conversations throughout class. They chose to sit together and have a true written conversation back and forth, each taking up every other line of the page, throughout the read aloud. Their conversation made me chuckle when I noticed how clearly they illustrated the way experienced readers are able to call their attention back to a text when their minds wander. In the midst of comments about the text, Yaritza wrote, “I am HUNGRY!” Josefina’s comment back was simply, “Power through it, girl!”

This simple exchange was followed by a continuation of the previous talk about the story. I was able to use their conversation to spark a class discussion about how we combat distraction as readers. One student exclaimed, “I didn’t know I was allowed to admit that I think about other things sometimes.” So, I was able to address that it is natural to lose focus and that it takes intentional effort or even use of a strategy to regain it.

Dave, Javi, and Kurt chose to conduct their back-channel conversation as a trio. They are excellent students with lots to say. When I read their conversation, I noticed that they each wrote only once or twice. Javi wrote a thoughtful and lengthy comment: “Internally he absolutely hates camping. The food they made was awful, and Sam wants to go home, but doesn’t want to tell his dad. Sam feels, though, that he needs to tell his dad about everything being built up. He notices how his dad is blind to what Sam is and wants to be. Sam is aggravated and feels invisible because his dad sees him in ‘his’ future that won’t happen. The significance of this is clear because he doesn’t even feel safe talking to his dad honestly.”

I wondered if the length of their responses was keeping this trio from capturing as much incredible thinking as I suspected they were actually doing. The next day, I offered each of them their own paper to start with. That way, they had three papers to switch among the three of them. By the end of class all three pages were filled instead of just one.

Andrew, who chose to write to himself and rarely speaks up in class, wrote, “Sam Abernathy and James Jenkins have more in common than what the book wants us to think. Their fathers both are forcing them into careers they are not passionate about.” He noticed similarities between the protagonist and antagonist pretty early in the story. His response also indicated he was thinking about how the author was revealing information to readers.

Although I believe the author’s subtle clues are intentional, I was excited that Andrew was making connections on his own—connections that were not explicitly stated in the text. Because I noticed Andrew was thinking deeply about characters, I tried giving the class a prompt to nudge their thinking toward the effect of setting on characters as we continued reading.

Had I not invited students to participate in back-channel conversations, I would have completely missed out on the patterns of thinking across my class. By noticing patterns, I was able to easily see when the majority of students had grasped a concept and were ready to move on. After modeling how to identify the effect of setting on a character, I suggested each individual, pair, or trio include in their back-channel conversation for the day some discussion of how the setting of Blue Creek, Texas, affected Sam and/or James.

One group, whose paper was otherwise filled with doodles (including some scenes from the book and off-task items), had a note tucked in the corner that read, “Blue Creek was bad for them, but Sam’s dad is going to help him win the contest.” Another student wrote, “Blue Creek stopped James and Sam from doing what they really want to do in life. Blue usually is another word for sad. Maybe that’s why it’s named that.” A third wrote, “The people’s image of Sam and James impacts them. How everyone in Blue Creek sees Sam as the little boy in the well and how they see James as a football star is what neither of them wanted to be recognized as.” Providing the simple nudge of a prompt, without making it a requirement, allowed me to see that most of the class was ready to move on to discussing character change and theme.

Now that I know the power and ease of engaging students in back-channel conversations during a read aloud, I will never again wonder what my students are doing while they listen.