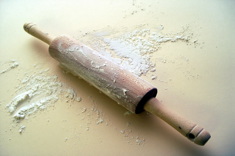 The Rolling Pin: Looking into Things

Julian looks long at the slipper shell, one he has brought to school from his collection. When I kneel next to him at writing time he is turning it over in his hands. He remembers the time he and his friend Peter, walking a Cape Cod beach, found it. It was the last summer they had together. He wishes Peter hadn’t had to move, he says, that he might see him again, hear him laugh. I ask Julian to write a few word sketches in his writers notebook, keeping to the present tense, as if what he sees in his mind’s eye is happening right now. He writes, I pick up the pink slipper shell. I stare into a small hole. I try to fit my pinky into it. I watch Pete put it to his ear. I copy him.

Julian and his classmates also read poems with objects at their center. They read W. S. Merwin’s poem “The Unwritten” in which the character looks deeply inside a pencil and finds all the stories waiting to be told, all the words waiting for a call from the writer. Julian studies a poem he admires and tries on the structure: an action, an inner thought, a closer action, a flashback image (or memory).

I stare into the pink pocket of my shell
half expecting to see
a small wave.
I put it close to my ear–
I hear the splash of you laughing.

The objects of our lives hold the stories, the mysteries of our lives. In his book Crafting a Life in Essay, Story, Poem

, Donald Murray writes: Celebrate the ordinary, the obvious, the things that surround us that spark memories, and imaginings.

Recently, I found myself celebrating a rolling pin. I didn’t expect to. I have long since given up most of the culinary delights (and detriments) of the southern diet I grew up with. As for cooking, I could never hope to measure up to my mother’s accomplishments in the kitchen. And the tools of her trade, to me, resonated more with work than with pleasure. But while the waves of accolades she received after every meal and at other social gatherings buoyed her up, the surge of constant expectations seemed more like drowning to me.

However, on Labor Day this year, when I was asked to bring dessert to a friend’s gathering, I decided on fruit pies, as my mother might have done. Alas, five years ago I decided, as part of a life-simplification plan, to rid cupboards and drawers of objects I didn’t plan to use ever again. The rolling pin met the same fate as the hardboiled-egg slicer and the ice cream scoop. A national holiday is not the best time to look for a slightly outdated utensil, but the search was on.

The following poem, The Rolling Pin, took me to a place I didn’t expect to go. But I think that both Julian and I are discovering that by looking into things, turning them, putting our individual slant on things, we find what is deeply true.

The butcher at Kings Supermarket
sips his coffee, says he will find me
a rolling pin, not to worry. I’ve been
to Taylor Hardware, Stop and Shop,
the Chic Cooktique. This is the last foray
before the pie I promised to make
on Labor Day, like my mother’s.

A wine bottle would do just as well
I’m told. I shiver at the thought, the splinter
of an old story slicing through a mountain
of shadows. “Not in my house,” my mother
would say. Not in her house, where the laws
of prohibition reigned right up there
next to the tablets of stone. Not

in her house, where she cut the labels
from cans of fruit cocktail, so tempting
was the word; where groceries packed
in a box blazed with Miller High Life
once sat rejected on the back porch, staving
off sin by association. A wine bottle will not
shape a pie in my house. I must not
scare what is sacred.

Overhead, a voice crackles
the news, “Will the customer looking
for a rolling pin please come to the courtesy desk . . .”
She hoists it aloft like an Olympic torch
and I sprint over to claim it, to bring it home–
home, where ancient kitchen games
are being rekindled.

Chilled, heavy with butter, the dough
is stiff and unforgiving, like the promise
I wish I hadn’t made to shape it. Yet somehow,
softening, it yields to the gentle steering
of my new wooden wheel and folds up
in flutes over the late summertime
peaches I remember.

When my mother died, auctioneers, hawking
the leftovers of her life, tossed random clusters
into boxes, five dollars take all–ice picks,
oyster knives, spatulas, eggbeaters, a rolling pin–
small price for the craftwork of getting up at five,
biscuits every morning, noon, pie at night.

I claim the teapot, the crystal candlesticks,
green plates of depression glass–
small bits of grace.
I claim her recipes–the pinch, the tad, the dash–
I claim the taste, not the tools of it. 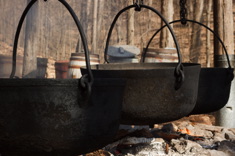 A poem and reflection to lift your spirits if you have the late-winter blues. 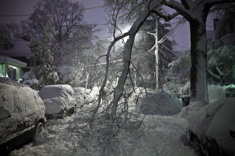 A mulberry tree crashes during a blizzard, creating a surprisingly lovely mental space for Shirl McPhillips to craft her poem. 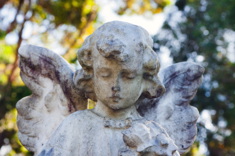 This is a lovely poem with a message about how poetry can move us, and why it is essential in classrooms.