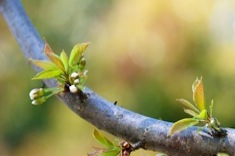 The Habit of Budding

protect a covering of modified

opposite, whorled— they bulge

An outgrowth from the body,

a bud rests. An undifferentiated mass

of cells hides in the axils. Terminal,

the cabbage; lateral, the Brussels

sprouts. Not yet unfolded, a promise

of youth—a chick, a cub, a kiddle,

it resists the frost until the onset

of another season. The sycamore,

Weaned in its first year, a calf rubs

its budding horns against the fence

to feel a heart pulse back.

A tree, cut down by nature’s wise ax

will sprout again. Though its root

grows old in the earth and its stump

at the scent of water

it will bud and put forth branches.

No instructional manual can teach as much as careful attention to the sounds in even one great poem.

As a reader of poetry, I am carried on the wings of sound. When writing, I read every emerging line over and over, out loud, until I am satisfied that it “sounds right.” Part of tuning ourselves to the music of poems is becoming fascinated with words. Rolling them around in the mouth, feeling them dance off the tongue. To start writing “The Habit of Budding” I researched the bud and made pages of words and phrases from science, art, other poems, my notebook. I had a ball arranging them for rhythm, sound, surprises in meaning.

Students need to become aware of words, to delight in them as they are voiced, but also as they sit together in pairs and in lines. Susan Goldsmith Wooldridge, in her book poemcrazy, writes about her students creating wordpools. They find words, call them out as she scrawls them wildly across the board. They list them and toss them together in crazy “word salads” from field guides, repair manuals, anywhere. They throw in some foreign words, some unique place names. Words begin to cluster themselves into chunks of pure sound, into rhythmic lines. Some take off into poems of their own.

Editor’s Note: You can read more about reading and writing for sound and becoming attuned to words in Shirl’s new book Poem Central: Word Journeys with Readers and Writers from Stenhouse Publishers.