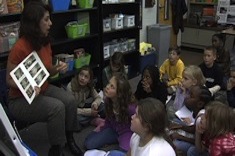 Teaching the Rule of Three to Writers

There are some stories that are easy to remember — we pass them on to our children and grandchildren from memory.  I’m not sure I ever read The Three Little Pigs

or Goldilocks and the Three Bears

, but I certainly know the stories. It’s interesting that these are the kinds of stories we know by heart, when they’re certainly not the most beautifully crafted stories. But they’re simple enough to remember, and complex enough to keep our attention over the years.

I credit this to the fact that everything happens in threes. There are three protagonists (bears or pigs), there are three events before the climax (taste the porridge, break the chair, and fall asleep in the bed),  and there are three of everything (three bowls, three chairs, three beds and three houses for the pigs). The pattern is easy to remember.

When I teach students about writing, grammar, and even reading, I refer to the rule of three. The rule of three is simple:  things are manageable and elegantly presented in threes. A writer can write about three characters. A child can learn to use commas between three nouns in a series. And a reader can notice words and phrases that are repeated three times. Once students accept that three is a manageable number and that a lot of writing has a pattern of three elements, my teaching gets a lot easier. Here are some examples:

Look at this line from Slow Loris

It took Loris ten minutes to eat a Satsuma . . . twenty minutes to get from one end of his branch to the other . . . and an hour to scratch his bottom.

He doesn’t have a lot of friends, only Poppy.  He left his family.  He wants to be by himself and eat salt.  He shouts when someone comes near.  He’s sad and lonely all of the time.

Notice the paragraph development. The main idea is he doesn’t have a lot of friends.  There are three supporting details:  He left his family, he wants to be alone, he shouts at others.  Then there is the wrap-up sentence.

Here is another example of using the rule of three from There Goes Ted Williams: The Greatest Hitter Who Ever Lived

Notice the word ‘eats’ is emphasized through repetition and using the word ‘and’ instead of commas.  This gives the reading the understanding that the character ate . . . A LOT and OFTEN.

In the book How We Are Smart

, the format for each biographical profile is set up in three sections:

Writing Expectations and the Rule of Three

WARNING:  When you start teaching the rule of three, you’re going to see it pop up everywhere.  It will appear in books, in student writing, and even in science and social studies texts — Columbus had three ships!  Your students will not only improve their skills of reading like writers, but they will be empowered to try this strategy often.  After all, you’re only asking for three of anything.