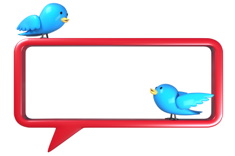 Years ago, I reluctantly signed up for a Twitter account. Shortly after the initial confusion and frustration, I became addicted.  Many days Twitter is my free-time activity of choice. My husband tired of hearing me ramble on about Twitter, so he joined. My twenty-year-old daughter also opened an account. Anyone who spends more than two minutes with me knows that I LOVE Twitter! The key for me is that it is more than a social network — Twitter is a rich source of professional learning.

The majority of people I follow on Twitter are educators who focus either on children's literature, literacy or technology. Those are the three things I am most interested in right now in my professional learning. Sure, I have a few others that I follow — some bakers, successful dieters, and a few Sesame Street characters. But the majority of my network consists of people who are learning and thinking about the same things that I am.

At November Learning's BLC10 conference, I was able to hear Lee Kolbert's (@TeachAKidd) session titled "The Amazing Trace." She talked a bit about Twitter and explained it to the audience as "The teachers' lounge where you get to decide who gets to come in and who gets to stay." I thought this was the best description I'd heard. With Twitter, you get to decide who you listen to, and what topics you hear about.

If you want to get started with Twitter and begin building your own Personal Learning Network (PLN), here are some things you can do:

1. Follow 5-10 people you know. Find people who are thinking about the things you are thinking about.
2. Listen in for a bit. Get a feel for the kind of things people share on Twitter.
3. Comment back a few times. Respond to someone or retweet a tweet that you especially like.
4. Try to tweet a few things a week. Practice getting your message to 140 characters.
5. Pay attention to the people that you follow. Most likely, they are following people who have similar topics of interest. As they mention people or retweet other's messages, check that new person out. Is that someone you want to follow?
6. Take one friend a day and go through the people they follow. Check out the profile. Look at the kinds of things they tweet about. Are there a few people on the list that you might want to follow? You could also check out the lists they have organized and you can follow some of those. Take advantage of the networking others have done in order to build your own network.

If you are wondering where to begin, several Choice Literacy contributors have Twitter accounts.

Wikipedia defines Twitter as "a social networking or micro-blogging service, owned and operated by Twitter, Inc. that enables its users to send and read other user messages called tweets. Tweets are text-based posts of up to 140 characters displayed on the author's profile page . . ." Twitter takes some getting used to. Because people have to post updates in 140 characters or less, users have been creative with communicating longer messages. There is some basic language to know when you get started using Twitter. Here are some basic terms that will help you as you get started. I've defined them in the way I understand them.

Retweet — sending a "tweet" to your followers that you received from someone you follow. This is done as a stamp of approval and also as a way to share great stuff with your network.

Direct Message — When you want to send someone a private tweet, one that is only visible to the recipient, you can send a direct message.

Mention — When someone replies to you, retweets one of your tweets or uses your twitter name in an update, it is called a mention.

Link — Many of the most useful tweets include links to professional articles or blog posts. A link can be embedded directly in the tweet and it can be shortened if the link creates a message that is over 140 characters.

For more information on these and other important words related to Twitter, you can visit the Twitter Dictionary.

I needed support when I started using Twitter, and I continue to need support as I grow my network. The best resource is always a local friend or colleague who can walk you through some question you have. But there are also several guides available on the Internet for people who are learning to use Twitter. These resources are invaluable.

If you still aren't quite sure how Twitter works, Common Craft has a great video that explains it: "Twitter in Plain English"

Twitter4Teachers Wiki allows educators to find other teachers who tweet. You can find teachers with your area of expertise, and add your own Twitter information to the wiki.

Many people have posted insights at their websites and blogs to help others begin building professional networks through Twitter.

Edudemic who twitters as @edudemic pulled together The Ultimate Twitter Guidebook for Teachers.

I took it slow at first. Before I got the hang of how Twitter works, it seemed like a waste of time. But then I found a good link here, a great book there, and I began to see Twitter's potential. I followed new people and began to participate as I got more comfortable. I was on my own timeline as a learner, and it paid off. If you have been curious about Twitter, I hope I've given you the resources you need to jump in. Don't be afraid to set your own pace as you build your "virtual teacher's lounge" that you can control.