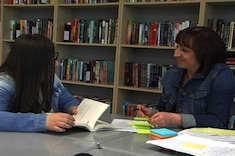 Conferences with my middle school readers often went like this: I would pull up a chair alongside a reader, ask about the reader’s current book, and listen to the summary to see if it sounded logical and convincing. I might ask a few follow-up questions, mostly to test whether the reader could provide additional logical and specific details. If things went smoothly, I would move on to the next student, and the reader would go back to the book unchanged. If things did not go smoothly, all sorts of alarms would go off and red flags would be raised in my mind. I would attempt to help the reader repair the gaps in comprehension, and ultimately, I would move on to the next student while the reader went back to the book unchanged.

Although there is definitely a place in my workshop for comprehension check-ins, I began to feel like there had to be more I could offer readers through these one-on-one interactions.

I began by changing the way I enter conferences. Now before pulling up a chair alongside a reader, I take time to review a recent response to text from that reader. That way, before I even sit down, I have in mind a strategy the reader is already demonstrating. I am able to take my time to think about the reader’s response and identify what the reader is doing that could be transferred to another text.

I start each conference by referring to the previous reader response and naming the work I notice the reader doing. In a conference with Olivia, I said she was noticing cause and effect in the book she was reading.

Edith’s response focused on the relationship between characters.

I was able to name for Julian that his response demonstrated his ability to empathize with the protagonist. By focusing on the reader’s response, I shift focus away from comprehension of a single text.

Although I enter a conference with a specific skill or strategy in mind, I follow up the naming of the work a reader is doing with a question to get the reader talking. Instead of checking up on accurate comprehension, I check in to see if the reader is continuing to do the same kind of thinking or it has evolved between the writing of the response and the time of the conference. Not only does this allow me to confirm my initial thoughts about the reader’s focus, but it also sends a message that it’s expected that the thinking they are doing in one response will be transferred to other situations. Sometimes, a reader may not even be reading the same text by the time I get to a conference.

I let the reader know I am curious to know if the same kind of thinking is happening currently. In Olivia’s case, as soon as she started talking about what was going on in her book, she named additional causes and effects. Our conversation even uncovered that noticing causes and effects was causing her to think about possible predictions of what might happen next.

When I met with Edith, she was finding additional evidence of the same character relationship she had captured in her written response. After pointing out that Julian was showing empathy, and listening to him talk about his thinking, I noticed he was making an even more sophisticated move as a reader by identifying what motivates characters. Listening allows me to follow where the reader leads and build on the work that is naturally occurring during reading.

Once I have worked with a reader to name a strategy or skill and identify whether it is continuing to be applied to the current text, I suggest the reader work intentionally to capture this thinking. We focus on a short section of text, so as not to allow the reader’s response to become the driving purpose for reading. The danger of allowing the response to become the main reason for reading is that focusing on the assignment could send the message that reading is something done to please a teacher or earn a grade as opposed to being done for the reader’s enjoyment and growth.

Because I have entered the conference with the reader’s work in mind and listened to the reader, my suggestion for the direction of a reader’s work is nearly always met with agreement. The only times I am not met with agreement initially are when the reader needs further clarification before commiting to the work, but ultimately these cases too end with an agreement. Olivia agreed to keep track of causes and effects. Edith went along with my suggestion to take note of when the relationship between characters shifted. Julian was open to the idea of following his line of thinking about character motivation and even asked if he could record more than our agreed-upon number if he found additional examples.

Although the final step requires reminding the reader of the logistics of the work, that is not the most important reminder. I start by jotting our agreement on a sticky note that can be tucked inside the book. I negotiate what thinking the reader will capture, how much will be recorded, where it will be recorded (notebook, sticky notes, loose paper), and the time by which it will be completed. These details are essential for monitoring the work. I also have students record due dates and a general note about what is being tracked on a whole-class wall calendar I use to check in on the work. Each day, I check who is listed on the calendar to remind those students to put their work in the bin. I used to think I had to confer with every student immediately upon completion of their work. I have found that things run more smoothly when the expectation is simply to turn work in for me to review between conferences.

The most important reminder during a conference, though, is talking about how the reader’s work in the current book transfers to other reading situations. I like to point out that this work is happening naturally for the reader now, but by paying closer attention to it in a situation where the reading is enjoyable and comprehension comes easily, a reader is set up to transfer this thinking to a text that is more challenging. Olivia needed to be reminded that taking note of causes and effects helps her keep track of what is going on in a book. Edith’s work focusing on character relationships was sure to lead her to the theme of this book and would work in other texts as well. I reminded Julian that his focus on character motivation would unlock the keys to any text, even future assigned reading situations. These reminders are the way I end conferences, so that readers are left with the underlying purpose behind the work. 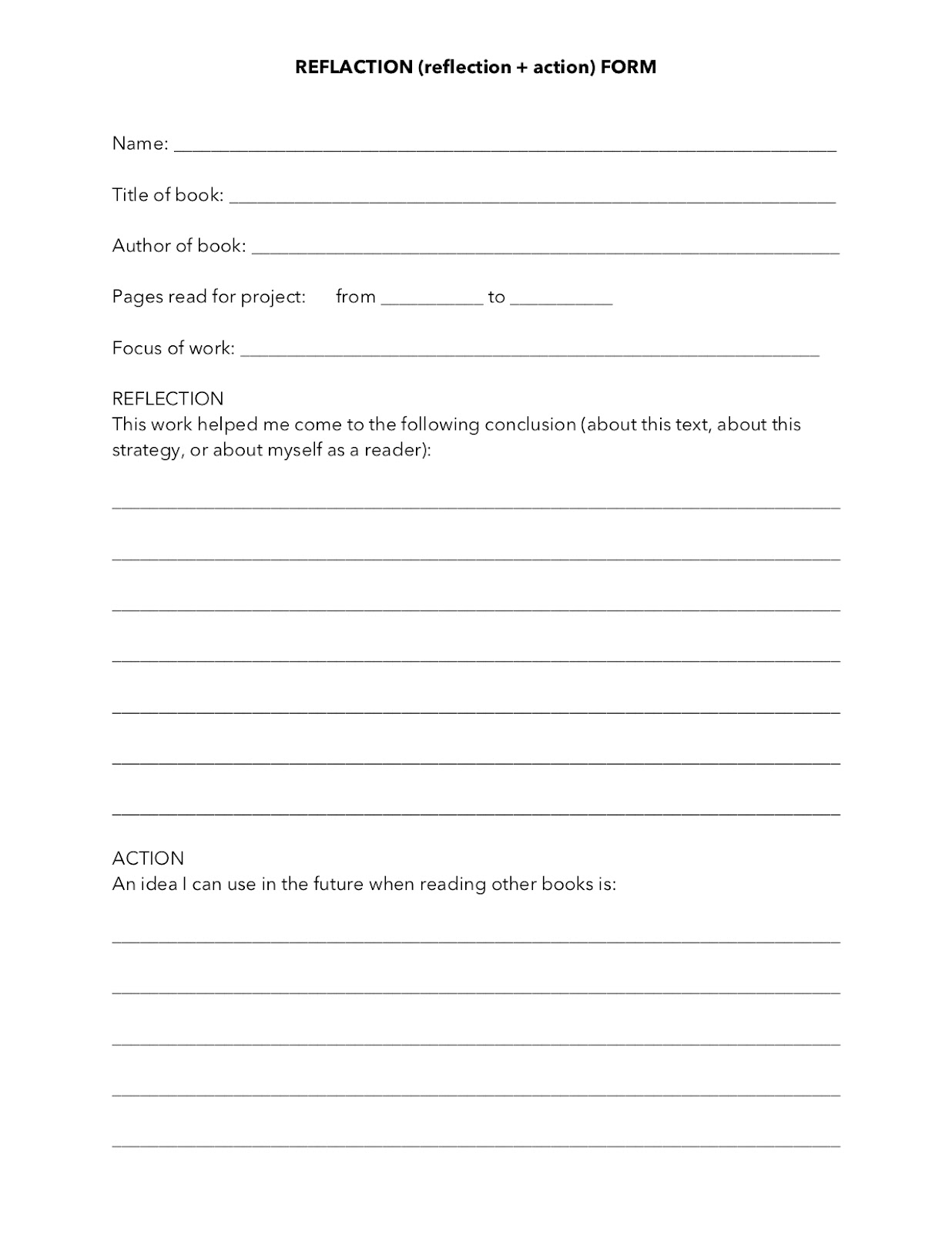 On the form, readers are asked to name the work, reflect by drawing a conclusion (about the text, the strategy, or themselves as readers), and identify how they will take action by describing what they will take away from this work to transfer to another reading situation. By reviewing reflaction forms, I can see whether a reader is ready to move on to a new skill or may benefit from continued practice.

Now that I put the four steps in place and follow up the resulting work with the reflaction, I can see evidence that readers walk away from conferences with tools to help them independently comprehend not only their current book, but future texts as well.

Download a copy of the REFLACTION (reflection + action) FORM.