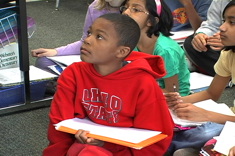 Conventions and Keeping It Real

Conventions. Ahh, the bane of a writing teacher’s existence. How many times have I looked at a student’s writing and seen lowercase letters starting sentences, names not capitalized, end punctuation marks missing, and quotation marks nonexistent in dialogue.

I know. I know. I shouldn’t notice any of this. I should read for content. I should focus on what the student showed me they did and not what they didn’t do. But gosh darn it, I can’t help myself! When I look at a fourth grader’s writing and conventions they were taught in first grade are so glaringly absent . . . well, it just drives me crazy. So I racked my brain recently to see if I could come up with an entertaining and real way for using quotation marks and the corresponding punctuation.

I had tried pointing out quotation marks around dialogue in picture books, and I had tried editing minilessons and editing checklists that included asking students to check for punctuation. None were really successful.

I needed to find some way to make convention instruction stick and for students to apply it to their writing. One morning, I found myself thinking about it on my way to school. Knowing that students are born hams of the stage, I decided to try drama. I would make up a few short scenes in my head, ask a couple of students to act them out silently, and then ask the rest of the class to create the dialogue on whiteboards.

On the morning I introduced this strategy, I announced that the front of the room was the “stage.” Then I asked for a couple of volunteer actors.  Eventually, the rest of the class would serve as the scriptwriters, but the first few times, I scaffolded the scenes by providing the dialogue in this way:

With whiteboards and markers in hand, scriptwriters observed the actors and then created the dialogue they imagined the actors engaged in during the scene they silently mimed. That’s when the fun and creativity really kicked in. From “Wow, Olivia, where’d you get those shoes?” to “Hey, Valeria, I want to wear your hat!” the room buzzed with kids writing dialogue and . . . applying quotation and punctuation marks!

When the students started creating the dialogue, I served as the narrator, setting the scene and context for the writers. I introduced the scene by giving a context for what was going on.

Here are some examples of the scenes children have scripted:

Here are some possible variations:

Now, if I could just come up with a way to make capitalization entertaining. Since I dreamed this up on a drive into school one morning, maybe during another commute, I will get some inspiration. And isn’t admitting that we often plan in the car while driving to and from work a classic example of keeping it real?