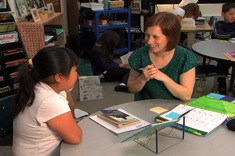 Books That Touch the Heart

A recent coaches’ networking meeting was derailed by an experience shared by one of the coaches. Sandy was helping a group of sixth-grade teachers put together a text set on the Civil War. They were selecting titles to be used for reading aloud, independent reading, literature circles, and references. When Sandy suggested that they include Pink and Say

as a read aloud, she was met with a barrage of protests. Sandy was surprised by the teachers’ objections to the book. They were in favor of including the book in the text set, but they did not want to read it aloud. Why? The teachers knew that the book made them cry. They did not want to cry in front of their students!

When Sandy finished her story, the other coaches were just as surprised as she had been. They believed that crying while reading a book aloud was a powerful demonstration for the students. It demonstrated the power of a writer to craft text in such a way that it strikes an emotional chord. One coach explained, “It takes a master storyteller to put us right there with Sheldon Curtis as he touches the hand that shook Abraham Lincoln’s hand for the last time.” Crying demonstrates a reader’s ability to connect with the emotions of the characters in the book. The coaches agreed that one of the major goals of reading aloud was to model the joy (or sadness) of the subject matter. The coaches confessed that they actually enjoy a good cry. Is there a better way to “sell” books than to show how profoundly you are impacted by reading them? One coach reported that her all-time favorite books were books that made her laugh, cry, or think.

I thought back upon a story that Toby Kahn Curry told about her daughter. The family was eating dinner. Toby’s daughter was telling her family about the end of a book she was reading in school, Stone Fox

. As the child was telling her family what happened, tears began running down her cheeks. Toby said, “I’ve read that book about dozen times and I cry every time.” The child said, “I was crying so hard in school, I got the comprehension questions all wet!” You’d think her response would be a sufficient demonstration that she “comprehended” the story.

The coaches began talking all at once about the books that always make them cry, so I began making a list. The list contains “all of the usual suspects” and some surprising choices. The coaches all agreed that they were going to go into classrooms the following week and model that it is okay to cry while reading aloud to a class. Here is our list of tearjerkers. Get an extra box of tissue and enjoy.

The universal tear-jerking life experience is being confronted with the death of a loved one. These books share how characters react and respond during this period of difficulty.

A ten-year-old boy dreams of having a pair of first-rate hunting dogs. He works odd jobs and saves all of his money. Finally, he gets his dogs. They are everything he dreamed of. But you know what happens to the dogs in a book that makes you cry . . .

What would happen if a bomb struck a zoo and the wild animals got loose? This is the question that was posed to zoo administrators in Japan during World War II. They made a difficult and unbelievable choice.

Comfort thinks that she has the whole death thing figured out. After all, her family is in the funeral business. But suddenly her favorite uncle dies, quickly followed by his wife (her favorite aunt). Can she possibly survive all of that and the drowning death of her beloved dog?

A grandfather writes a letter to his grandchildren telling them that their tree, Steve, was destroyed in a storm. The letter details the memories of the tree, from its planting to all of the good times that the children and grandchildren had with it.

Sometimes life is hard! These books show us how characters face and transcend the challenges in their lives.

Peppe is very proud of his job lighting lamps. However, his father is not impressed with Peppe’s job and makes disparaging comments. Discouraged, Peppe does not report to work one night. It is the same night that his little sister gets lost coming home because she is frightened by the dark.

Ruthie lives in pre-World War I Indiana. She has six brothers and no sisters. Ruthie’s mother really wants Ruthie to “act like a lady.” Ruthie struggles to maintain her own identity while keeping her mother happy.

Anna and Katya love ballet. Kayta is stricken with polio and loses any hope of ever dancing again. But Anna does not give up hope. She looks for ways to involve Katya in ballet, and to encourage her to have hope.

Philip Gonzalez (1996). The Dog Who Rescues Cats: True Story of Ginny, The

A Vietnam veteran adopts a dog to help with his depression. Ginny the dog exhibits an extraordinary talent for finding and rescuing cats in trouble. The dog and cats change the veteran’s life.

A peach hanging from a limb yearns to see more of the world. A frog assists the peach by getting her down from the tree, building her a boat, and being her guide to all the new sights.

Twelve-year-old Shabanu has a personality quality that is not acceptable for Pakistani girls. She is strong willed. When Shabanu’s family encounters financial problems, her father agrees to a marriage for Shabanu. How will she survive when she is married to a much older man who already has three wives? Haven’t cried enough? Read the sequel,Â Haveli.

These books are like lovely greeting cards — beautiful sentiments expressed along with happy endings.

Patricia MacLachlan (1994). All the Places to Love

A young boy takes his sister for a walk around their farm. As they walk, he points out all of the places on the farm that their grandparents and parents love. They end up at the place he loves best on the farm.

Sylvester finds a magic pebble and makes an unfortunate wish during a moment of panic. It takes a miracle to make things right.

That Book Makes You Cry?

Who can tell what will make you cry? Here are some surprising choices.

Anna and her grandmother get together every Wednesday to work on a surprise. This book has one coach reaching for the tissues at the triumphant ending.

A young boy is beginning to doubt the existence of Santa Claus. One Christmas Eve, he is awakened by a train that stops outside of his house. He boards the train that takes him to the North Pole to meet Santa. One of the coaches can’t hold back the tears when the little sister can no longer hear Santa’s bell.