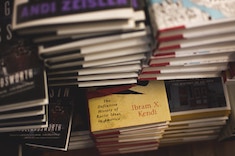 Have you ever noticed how even the things you love sometimes annoy you? Perfection is hard to come by, and small, niggling issues tend to pop up and overshadow our positive feelings. Take, for instance, my husband. I love the guy dearly, and without him my life would be greatly diminished, but sometimes his inability to remember to take the recycling out almost drives me to madness.

The same was beginning to be true for writer’s notebooks in my classroom. I love them and see the value they have for students as developing writers, but issues were cropping up around them that were starting to get on my nerves. Just like I’ll continue to keep my husband around, I didn’t want to get rid of this classroom routine, but I knew I had to make some changes. This year I have found that the changes don’t have to be big or sweeping. In fact, very small, simple tweaks were what led to greater happiness where our writer’s notebooks were concerned.

Problem: Getting Notebooks into the Hands of Students

I always want to dive into the school year with notebook work, but despite my having placed “composition notebook” on my summer supply list, only a handful of students actually come to school with a notebook on the first day. So, I usually give students a few days to go out and get one, reminding them each day in class. Even so, some students still forget, and the few extra notebooks I have available are readily scarfed up. While I was shopping for school supplies last summer, I saw that the composition notebooks I like my students to use were on sale for 50 cents each, and it occurred to me that I could just buy a class set of notebooks. Granted, my class sizes are relatively small, so it was not a large expense. On the first day of school I gave each student who didn’t already have one a notebook, and we were able to get right to work. That day we looked at how author bios are constructed, and students began crafting their own on page one.

Each year our school district gives each teacher a small amount of money with which to order school supplies. This year I will be adding class sets of composition notebooks to my list along with the pencils, paper, and other things I usually order. I don’t know why this simple solution had never occurred to me before, but it prevented a lot of stalling when it came to establishing the notebook routine in my classroom.

In an effort to keep the notebooks organized, for years I had my students divide them into different sections. I originally used Kelly Gallagher’s suggestions in Teaching Adolescent Writers, which lays out six different sections: brainstorming, literary terms, spelling demons, craft, editing, and writing. Then after reading Penny Kittle’s work, I added three sections: to-read, completed books list, and reading response. That was nine different sections going on in one notebook! Not only was it taking an entire class period to number the pages and set up the notebooks at the beginning of the year, but my students’ notebooks were not staying organized! Here is a typical exchange that might have occurred in any given class period:

Student 1: “What section is this going in?”

Me: “We’re in the writing section.”

Student 2: “Writing section?! I already wrote this in the brainstorming section! Do I have to rewrite it?”

When I went to grade writing entries, I felt like I had to flip through the entire notebook in case the student had accidentally written something in another section. At first, I tried streamlining and reducing the number of sections to just four—reading lists, brainstorming, craft, and writing—and giving students tabs for easier access. But this still did not seem to solve the organization problem for some students. The sections themselves were becoming a hindrance and a bother.

This year the thought occurred to me: what if we had no sections at all and just started from page one and went from there? As an organized person who liked the sections, I was hesitant to abandon them. So I compromised with myself. I would do the traditional sections with one class and forget about them with another and see how it went. The result? I did not miss the sections at all. Not only did I regain an entire class period that would have been spent setting up the notebooks, but I found that they were more organized without the organization. Students were doing a lot less flipping, and there was never a question of where we were supposed to be. The answer was always “On the next blank page.”

Problem: Grading Did Not Seem Fair

When it came to grading, I held to the theory that notebook work is practice and therefore should not be graded on writing conventions. That being said, I still wanted to give my students credit for putting in the work and an incentive for actually doing the writing. Before collecting the notebooks, I would give students a list of the entries we had done, and they would receive five points if they had the entry and zero points if they didn’t. The problem I was seeing was that despite my urging to “write the whole time” and show exemplary entries, there were still some students who were barely writing anything, some only a sentence or two. But when it came to the grading, the entry was “completed,” so they got five points, right?

This system just didn’t seem fair to me. Some students were writing a lot and stretching themselves to try out new craft moves that we were studying, whereas others were doing the bare minimum and receiving the same grade per the system I had set up. The other problem was that I was collecting the notebooks only once per quarter, so I sometimes didn’t realize I had a writing slacker until it was too late. I knew something had to change.

This year I made two small changes: collecting the notebooks more frequently and adding a layer of student reflection to the grade. First, I collected the notebooks every two weeks, rather than every quarter. This way if a student was not putting forth enough effort or not pushing themselves to try new craft moves, I would notice a lot sooner and could speak with that student. Second, I added a student reflection component. From the very beginning of the year, I tried to be more explicit about what “good effort” looked like in our writing entries by showing student exemplars and keeping expectations. When it came time to turn in notebooks, instead of me completing the rubric on my own, I added a column for students to rate themselves on each entry. This process of grading notebooks made students more accountable for their work while still being allowed to play without penalty for writing conventions.

By the end of last year, I was feeling irritated by how notebooks were working in my class in general. By identifying the specific problems I was having with our notebook routine, I was able to find relatively small solutions that had big effects. Now, if I could just find a way to get my husband to remember the recycling . . .