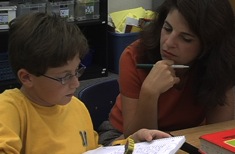 When Are Students Ready for Writers’ Notebooks?

My brother and sister in-law just had their second baby boy, Zachary. Zachary is a big baby (as far as newborns go) and he eats like a honey badger. (This is my brother’s analogy, not mine.) My brother and his wife are incredible parents. I was surprised when at six weeks after Zach’s birth, my sister in-law wrote on Facebook that she was tired of Zach waking up twice each night, and he needed to sleep through the night already. Many of her friends posted how their babies slept through the night at four weeks, which wasn’t much help. Zachary started sleeping through the night at ten weeks, and not a moment sooner.

This made me think about how often we want definitive answers to child development. Just like each baby has a different timetable for when they’ll sleep through the night, every child develops differently as a writer. Teachers can establish an environment that will nurture writing and provide the time for students to write, but this won’t guarantee a standard growth rate among students.

When I work with second-grade teachers, they all have the same question: Can second graders keep writing notebooks? Second graders are becoming more fluent writers, and most are able to hold their thinking and write part of a story one day and finish it another. Some second graders are attempting to write chapter and series books to entertain their friends. It’s a writing bonanza in second grade and a teacher naturally wonders, how do I challenge these kids? How do I support them in their writing now?

Not all second graders are ready for notebooks, and they’re certainly not all ready at the same time. There are still many benefits for second graders to use the small, stapled books (or big, stapled books). It’s important for children at this age to practice adding on to writing, extracting pages to take out information, or rearranging paragraphs and sentences. Illustration, poetry and informational studies can all be done in second grade. We can lift the level of our teaching to help writers, and you don’t have to have a notebook to do it.

So what’s the difference between second and third graders using a notebook? What difference can a year make? It depends on the child, the teacher, and the class. Teachers need to be the decision-makers. To help you make this decision or to gauge when students are ready, here are some cues to look for in your student writers:

Katie DiCesare, a first-grade teacher, puts it this way: “I find it easier for my primary writers creating pieces of writing that are organized and visually similar to most texts they are reading. Booklets allow for creating illustrations with words across multiple pages and for beginning writers this support mimics what they do when they learn to read.”

As students become stronger readers, they will develop as writers needing less support for creating pictures in their notebooks.

Building stamina is a gradual process. Beth Lawson explained how she balanced booklets and notebooks in her second-grade classroom. “We used both writers’ notebooks and writing folders. During genre studies students wrote on lined paper or booklets and kept these in their folders. The readiness cue to begin using a notebook is simply excitement and a willingness to write.”

Truth be told, not all of my third graders come to school ready for notebooks. But those kids are the exception to the rule. Most third graders, after spending years making smaller books, are itching to keep their writing in one place.  Because the workshop is a terrific place to differentiate instruction, it wouldn’t be wrong to introduce writer’s notebooks to a small group that was ready, while the rest of the class continued with draft pages or booklets.

Beth Lawson describes how she gave out notebooks in her second-grade classroom:

I did not hand out notebooks right away. Students were working on writing in booklets and over the course of a week or two, I handed out notebooks to writers during their conferences when it seemed like they were “ready” (i.e., motivated and excited to keep one). I made sure everyone received a notebook in less than two weeks so that no one felt discouraged. My reluctant writers became so curious about the excitement over the notebooks that they were incredibly motivated. Once they received one, it was like writing took on a whole new meaning.

After the first few days of handing out notebooks, some of the other writers would whisper and then clap when they saw me pause during a conference to give a writer a notebook. That particular group was so wonderful about understanding that everyone worked at their own pace, and they were very supportive of their fellow writers. I don’t think I heard a single, “that’s not fair.” In fact, each time a notebook was given, there were a lot of concentrated looks, often with little second-grade tongues out the sides of their mouths, and pencils flying in hands. They wanted to be “ready” for a notebook too!

Keeping notebooks may seem easier than having paper all over the classroom, booklets sticking out of desks, and writing folders that fall apart. But unless students are far enough along in their writing development, they’ll be spinning their wheels trying to make sense of how to use the notebook. It’s about patience and timing. Students will be ready, but they need the time to grow as writers in a way that supports their individual development.

Looking back on my years of teaching, there probably have been times I should have waited to start the writer’s notebook. I should have given the kids another month with booklets, or started one small group that was ready and hold off with the rest of the class. One year, Camille was in my third-grade class. She held her notebook to her chest and said, “Ms. Buckner, I just love my notebook. I have so many stories. I just can’t write all the books fast enough. This notebook holds on to them until I have time.”

Camille was ready for a notebook. She was itching for one. I think of Camille when I prepare to launch writers’ notebooks in my classroom. It’s my hope all of my writers will love their notebooks as much as she did. When they’re ready for notebooks, the blank pages aren’t scary; they’re exciting. This intrinsic motivation will fuel our writing workshop for the rest of the year.