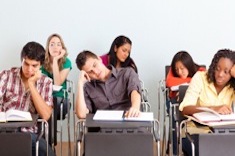 Teaching seniors at the end of the year is always a challenge. The other day, I actually heard one student say to another, “Why would I bother learning anything now?” As much as I wanted to go off into a lecture on the values of lifelong learning, I understood what he was feeling. After facing end of the year “senioritis” for the past decade, my question is always “How can I keep my seniors engaged and learning during those last couple weeks of school?”

The answer I’ve found is poetry. You might be skeptical, so let me explain.

I like to start out by asking the students to name some poets they know. I usually get answers like Emily Dickinson, Walt Whitman, Robert Frost, and some of the other big names that they’ve read and studied in school.

“Those are some really great ones, but can you name a poet that’s alive and writing poetry today?”

This time, crickets. Although my students have read and studied some great poetry, they see it as something from the past rather than something created by living, breathing poets of today. I want to change that perception.

A Week of Modern Poetry

We started out with five poems by five poets at the beginning of the week.  We read, discussed, and slowly narrowed our choice down to the poet we liked best by the end of the week. I find that when I ask students whether or not they like poetry, they can answer yes or no, but most of them can’t say much more beyond that. Can you imagine asking a teenager the same question about music, without him or her elaborating about the various genres, conventions, and artists they love? It would be unheard of. Yet, the majority of students aren’t able to articulate any poetry preferences.   That’s what this week is all about — taking the time to immerse ourselves in the language of poetry, to discover and look for patterns that attract our ears, and to formulate our own personal opinions as to what makes a “good poem.”

This year I used the poets Billy Collins, Seamus Heaney, Louise Gluck, Maya Angelou, and Nikki Giovanni. Sitting in a large circle, we read each of the five poems a couple times, and then we discussed them. What caught their ears? What turned them off? Because my students always have an opinion, the discussion took off right away.

On the first day, the class was divided about Billy Collins’ poem “Litany.”

“This poem makes no sense. All he is doing is saying how he and this other person are random stuff, like bread and wine.”

“You’re just not getting it. The poem is supposed to be funny,” another student replied.

I admitted to the students that the first time I read a Billy Collins poem, I suspected that it might be funny.  It wasn’t until I heard him read his poems that I really understood his tone, which led to what we would be doing the next day: listening to the poets read their own works. Before students left for the day, I asked them to write down the four poets that they would like to hear more from the next day, and it turned out that Seamus Heaney would not be with us anymore.

On the following days, I let the poets speak for themselves. I was able to download some poetry readings from iTunes, as well as purchase some audio collections from Amazon or check others out from the public library.

Hearing the poets’ voices and listening to their presentation of specific poems added a new layer to our discussion. Did the reading enhance or detract from our enjoyment of the poem? Why? Several more students were attracted to Billy Collins’ humor when they heard him speak as the ghost-dog who admits he always hated his owner in “The Revenant.” Many of the students were laughing out loud, a reaction they admitted they never imagined having to a poem.

Some students liked the inviting sound of Nikki Giovanni’s voice as she read “I Wrote a Good Omelet.”  One student remarked, “It’s kinda strange because her voice sounds like a kind, old grandma, but this poem is about being head over heels in love, which is something you wouldn’t expect your grandma to be talking about.”

One thing all of the students agreed on was their assessment of Louise Gluck’s reading style. While they had enjoyed the simplicity and message of her poem “First Memory” on the previous day, they were turned off by hearing her read “The Red Poppy.” As one student put it, “I don’t like the way she pauses so much. It really messes with the flow of the poem and makes it harder to understand.” As a result, they chose to eliminate Louise Gluck for the following day.

At this point we were down to three poets: Billy Collins, Maya Angelou, and Nikki Giovanni. As we continued to read and discuss their poetry, I added a new element which incorporated looking for patterns and developing arguments. I wanted students to articulate what it was that they noticed about these poets after reading several of their poems, and I wanted them to make a case for which poet should be the last one standing. We had been working with claims, warrants, and evidence all year, so this was just one more way of practicing their argument skills.

At the end of the week, students presented their arguments to the class, and I was amazed at the amount of passion and eloquence that went into their appeals for their favorite poets, even as only a few days remained in the school year. It was close, but in the end Billy Collins prevailed as the class favorite. I had students write a reflection about the week, and many students said that they learned more about their own tastes in poetry. One student wrote, “I learned that I like poems that feel powerful and have a lot of rhythm to them, like Maya Angelou’s.” Another, “I never knew that poems could be funny. I thought they were usually really serious.” Others wrote about how this poetry activity was one of their favorite things that we did all year.

So seniors at the end of the year learned a little something and enjoyed it. Who would have thought?