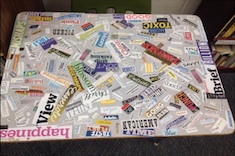 I hear students making these kinds of blanket statements about poetry all the time. Why are students (and people in general) so fearful of poetry? I think it might be that we’re so accustomed to writing prose that the conventions of poetry—line breaks, figurative language, rhyme, and meter, just to name a few—take many people out of their comfort zones. When I have students who want to run for the hills when I mention writing poetry or who sit and stare blankly at a page with nowhere to begin, I try one of these strategies for creating poetry. Trust me, these ideas will have even your most reluctant student writing poetry.

Several years ago I took a poetry-writing class at a local arts center. The instructor, Michael L. Wilson, had one of the most fun and interesting methods for creating random word poetry that I had ever seen. He gave us a roll of tickets and had us look through magazines and newspapers for interesting words or phrases, which we would then cut out and glue to the tickets. Once we had a collection of tickets, we would spend about 10 minutes simply sorting the tickets into two piles: keep and discard. After sorting, we began arranging the words and phrases into a poem. Once it sounded right, we would write it down, and voila, there was a poem!

To obtain a large collection of tickets, I purchased a few of Wilson’s Jumpstart Jars, which contain premade tickets (each jar contains 2,100 different nouns, verbs, modifiers, and interesting phrases) and began using this activity in my classes. Students love it, and there is no room for failure. What’s interesting about this activity is how words that appear to be random develop meaning as the student shapes them into a poem. Here are two examples of student poems written using this method:

Could it be my biggest fear?

Who is he really?

Or leave it behind

I sat in a

I wanted to see her again

This method uses an element of chance to trigger a student’s writing. To prepare for this activity, create a spreadsheet with eight columns, each containing 10 different words. A sample is below, but any collection of nouns and verbs will do. Sometimes I use a premade list like the one below, and other times I have created the list using student suggestions.

Students look through each column and circle the word that is most intriguing to them. Next, the lottery begins. Create slips of paper numbered 1-8, fold them up, and place them in a cup. Students take turns drawing slips. Say, for example, number 5 is chosen. Students take the word they selected from column 5 and use it in the first line of their poem. The word can appear anywhere in the line—beginning, middle, end—and students can take the liberty of changing the tense, making it plural, using the adverbial form, and so on. Writing continues this way until all lottery numbers have been drawn. Students end up with an eight-line poem that they can then title and share with a classmate. Here is Nathan’s poem:

It was on an early Monday morning

I was in the kitchen eating breakfast

I started to feel an itch on my neck

Then I could feel the breath of something

I saw a glimpse of what it was

It was a snake slithering into the kitchen

It was summoned by my brother

I grabbed the blade of the knife and went after him

This is a game that originated in the French Surrealist Movement. It is social in nature because you must rely on what others in your group write in order to complete your poem. There are several variations of this game, but this is how I use it in my classroom. First, I arrange students in groups of 5 to 10, depending on the class size. Each student is given a number and a pile of paper slips that corresponds to the number of people in his group. On each slip, he must write his number and then a line of poetry that follows this pattern: adjective, noun, verb, adjective, noun. He then passes the slips out to his fellow group members, keeping one for himself.

Once each student has a slip from every group member, they can get to work creating their poems. They will first put the poem in numerical order. One option is to let the poem stand as it is, but the poem can also be edited by rearranging or deleting lines. It is interesting to compare what each group member has done to the poem and how the same lines can create different poems, depending on the student. Here is Brittney’s poem:

A broken bicycle leans on a dilapidated garage.

The smiling suns peeks out from a dark cloud. 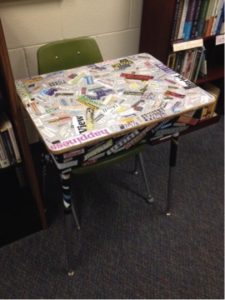 Whereas the previous ideas are meant to be used as whole-class activities, I wanted to have something in my classroom that could inspire my students with a bit of “randomness” when they are writing on their own. Inspired by all of the physical poetry pieces in The Adventures of Dr. Alphabet: 104 Unusual Ways to Write Poetry in the Classroom and in the Community, I decided to create a poetry desk with the help of my students.

Using my store of old magazines, I asked students to cut out the following: five nouns, five verbs, five adjectives, five small words, five words with more than six letters, and five unusual words. Working together, we placed our words in interesting combinations all over an old desk we recovered from storage and covered them with a coat of Mod Podge.

What resulted was a place for students to sit when they need inspiration. They can create a poem completely made up of words found on the desk, add interesting words to their own writing, or use a word combination as a spark to get them started.

The thing that all of these activities have in common is that they get students experimenting and playing with the language of poetry. These are no-pressure methods that provide an entry point for students to write poetry without feeling intimidated. Students create poems that are random, surprising, even absurd, but ultimately beautiful. More important, they show students that they can write poetry.