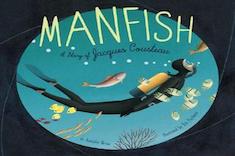 It was a Tuesday evening, and I was trying to get some writing done as I sat in the back of my daughter’s dance class. I had my notebook propped on my knee and a copy of Manfish: A Story of Jacques Cousteau in hand. A fellow mom friend looked over and asked curiously, “What are you up to?”

“Oh, just trying to get some schoolwork done,” I replied.

“Not for your school,” she said, pointing at the picture book in my hand and referring to the fact that I teach high school. I assured her that it was, in fact, for my high school English class, and then we had a brief conversation about how we had both watched Jacques Cousteau specials on PBS when we were kids. I shared some things that I had learned about Cousteau from the picture book, such as his interest in machines and cameras as a child, which led to him directing his own films. My friend asked to see the book. After she finished reading it, she handed it back, saying, “What a great little book!”

Granted, my friend is not in the education field, but I was surprised by her assumption that if I was using a picture book, it was probably more appropriate for something my young daughters were doing in school than for my high school students. But again and again I am blown away by the number of high-quality picture books out there that can give my older students information and teach them what beautiful writing looks like, and that are simply fun to read.

Her own reaction to the book further reinforced the idea that picture books are informative and entertaining for adults, too. I’m interested in Jacques Cousteau, but do I have the time or inclination to read a biography that is hundreds of pages long? Maybe not. In this case, a picture book fits the bill, just as they do in many instances in my classroom.

Understanding Ourselves Through Picture Books

For this particular assignment, my students and I were using picture books to gain information about a person in order to speak through his or her voice in a persona poem. I have noticed that when we’re studying poetry,  my students tend to assume that the speaker in the poem is the poet him- or herself. Although many poems are written in a personal narrative voice, this is not always the case. A poet can write from a perspective different from his or her own—a different race, a different gender, a different situation. When reading poetry, determining what a speaker is like or how he or she is feeling is more helpful than knowing who exactly the speaker is. Writing a persona poem helps students understand the choices that a poet makes to develop a speaker.

We began by watching a short video to learn some background on the Sirens of Greek mythology, then moved on to reading Margaret Atwood’s poem “Siren Song,” an example of a persona poem told from the perspective of a Siren. Students noticed that the poem is written from the first-person point of view and not only tells a story but also reveals something about the speaker’s personality or character—in this case, how manipulative the Siren is. She’s so practiced in the art of manipulation that we readers don’t even realize we ourselves have been tricked until we reach the end of the poem.

After looking at Atwood’s poem, students are ready to begin the search for a subject for their own persona poem. They begin sorting through and reading various picture books about famous people throughout history, from Joan Procter, Dragon Doctor by Patricia Valdez, a story of a famed herpetologist, to Bad News for Outlaws by Vaunda Micheaux Nelson, a story of Bass Reeves, the first African American deputy U.S. marshal. Once students narrow down a speaker for their poems, they complete some prewriting in their notebooks, noting information about the person’s appearance, personality, successes, flaws, and relationships.

I give students the following guidelines for crafting their persona poems in a free-verse style:

Here is Coltin’s persona poem based on the picture book The Man Who Walked Between the Towers by Mordicai Gerstein, the story of French aerialist Philippe Petit, who walked on a tightrope between the Twin Towers.

I stepped on the cable

A sudden rush went through me

There was no time for plea

On my way, I stared forward

Step after step, bend after bend

I walked through the towers just like the wind

Birds twirl around me

Not quite a feeling, but maybe a word

Moving specks down below

Now a soft noise rising from the ground

Soon I was the attention of all the town

Police were soon in my ear

Blue skies being served on a silver platter

There was no fear

This poem written by Hailey is based on The Oldest Student: How Mary Walker Learned to Read by Rita Lorraine Hubbard about a former slave who learned to read at the age of 116:

I couldn’t read it.

The lines made no sense,

I couldn’t decipher a pattern

but the symbol above was clear enough:

a symbol of opportunities

I practiced the lines

until my hand hurt

I wanted to learn so badly

but it was so hard

and so time consuming

I wanted to give up,

but I couldn’t let myself

Stringing the words together

became the most difficult part.

and I could read

But by the time I got to the end

I had forgotten the beginning.

I continued to practice for hours on end

I opened the first page of that Bible

that had sat on that shelf

waiting to be read.

“In the beginning God created

Tears welled in my eyes.

I could finally read.

Before I set my students off on their task to write their own persona poems, I shared the poem that I wrote from the perspective of Jacques Cousteau. I explained that I was trying to convey Cousteau’s sense of wonder and respect for the ocean, and I explained the specific choices that I made as a writer to do that.

When students finished their own poems, they had the same discussions in small groups. Hearing their explanations of what they were trying to accomplish in their poems made me realize that the next time they analyzed a poet’s craft, they would have more insight about a poet’s choices because they had struggled with those choices themselves. 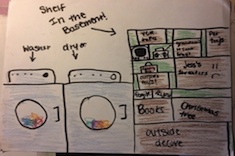 Gretchen Schroeder develops a unit on humor writing that engages and delights her high school students. 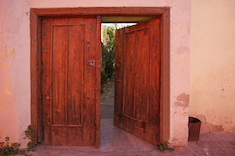 When One Door Closes 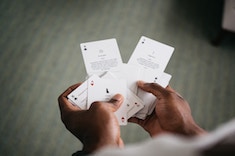 Teaching Tone: Deal Me In

Gretchen Schroeder’s high school students are surprised to see a deck of cards on their supply list. The cards are a tool for teaching the vocabulary of tone in creative ways.