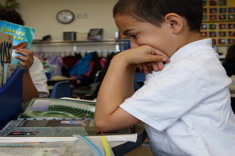 Since I am a ten-year-old trapped in a grown man's body, many of the books I read for kids seem to be targeted for prepubescent males. You know the type — books with covers that use aggressive fonts or pictures that seem to jump right off the cover. Books that are filled with more action than character development (though I do really enjoy complicated characters if they can also escape across rooftops in the middle of the night). Books packed with information — the grosser the better.

If you are looking for books that might attract the attention of the boy readers in your classroom, I would suggest taking a look at these titles.

is a beautifully crafted nonfiction picture book that takes the reader right to the edge of an erupting volcano. The text of this book is composed of relatively short and focused paragraphs or captions that explore topics ranging from basic volcano facts, to information that will be new to anyone who isn't already a volcanologist. I love when books remind me of information that I already know, then challenge me with new details. I think most boy readers are like this. They don't want to always be thrown into the deep end of the pool, but they do love it when they can learn new things.

My favorite bit of new information from this book was the idea of a "volcanic bomb." A volcanic bomb is when a chunk of volcanic rock, up to the size of a car, is hurled out of the volcano during an eruption. Volcanic gas and ash are probably more likely to cause harm to people and animals, but I really don't want to imagine a volcanic bomb headed my way. As well-written as Inside Volcanoes

is, the photography, illustrations and the use of fold-outs and flip-ups make this book even stronger. For example, there is a double flip-out arrangement that uses a four-page spread to describe what happened during the Mount St. Helen's eruption on May 18, 1980. If you can imagine boys with a thirst for science or a taste for destruction, then you should probably track down Inside Volcanoes

Great Migrations: Whales, Wildebeests, Butterflies, Elephants, and Other Amazing Animals on the Move

children's book is a companion to the National Geographic Channel show with the same title. In this book, readers trace the paths of some of our planet's biggest migrators. Creatures that are featured are red crabs, monarch butterflies, army ants and jellyfish. I really liked the diversity of animals in this book. The photography used is stunning. Who doesn't like a close-up of rampaging wildebeests about to trample you? The use of varied sizes and colors of fonts within the text reminds me more of a webpage or infographic than a traditional nonfiction book. I think we need books like this to see how students will navigate more nontraditional looking texts. The text is chock-full of incredibly interesting facts about these animals who travel great lengths to survive. Within these facts are plenty of boy friendly nuggets like, "The fiercely territorial ants attack migrating crabs. Ants blind the crabs by spraying formic acid into their eyes." Can't you just imagine the conversations that might flow around the classroom when one of your boys dives into Great Migrations

The Unforgettable Season: Joe DiMaggio, Ted Williams and the Record-Setting Summer of 1941

I have always been a huge baseball fan, so when a new book that puts our national pastime front and center for children is released, I feel compelled to read it. The Unforgettable Season

is a fun, easy to read story recounting our country's infatuation with the summer of 1941. During that season, two of the greatest batting achievements of all time happened. Joe DiMaggio recorded at least one hit in 56 straight games, and Ted Williams ended the season with a .406 batting average. Neither of these records have been threatened in the last 70 years.

is a wonderful book for boy readers for two big reasons. The first is the story introduces boys to heroes their grandfathers may have had in their youth. I love it when books can open the door to cross-generational connections. The second is that even though Bildner's prose and Schindler's illustrations both subtly take the reader back in time, the book is a showcase of how baseball really hasn't changed that much over the years. With how quickly things change in our world today, this story shows that some things stay remarkably the same. If you think you will have any sports fans in your room this year, then The Unforgettable Season

may be a way to get them reading right away.

is about a girl, but I think most boys will realize very quickly that if Amelia Earhart was in their classroom she would be playing football or soccer with them at recess. Robert Burleigh is a masterful storyteller. Even if you don't grab this book for boys in your room, you should add it to your stack of mentor texts for a multitude of reasons. His writing, especially the ability to stretch out some of the hair-raising moments of Earhart's successful Transatlantic flight, will suck in your boy readers.

"The Atlantic stares up with its huge uncaring eye. Breakers rise like teeth from its angry mouth.

She hauls backward with all her strength. The Vega Lurches. It levels out — ten feet above the ocean tomb!"

Writing like this, coupled with the fantastic paintings by Wendell Minor, should make Night Flight

a favorite for nearly all readers in your room.

A Nation's Hope: The Story of Boxing Legend Joe Louis

is more powerful — the understated yet purposeful writing of de la Peña, or the emotion-fueled paintings by Nelson. Both will pull boy readers into the tale of when Joe Louis defeated the German Max Schmeling on the eve of World War II. The text not only tells the story of the actual fight, but it gives the reader a brief look into Joe Louis as a young boy. Before reading this book, I did not know of the speech impediment that he had to overcome. I think that many boys will be able to identify with Joe's struggle to overcome adversity, because all of us face that at some point in our childhoods and beyond. The illustrations are fabulous. Nelson switches perspective frequently and uses an amazing level of detail to enhance the tone of the story.  A Nation's Hope

is most definitely a worthwhile addition to any classroom library.

How They Croaked: The Awful Ends of the Awfully Famous

by Georgia Bragg with illustrations by Kevin O'Malley (ages 10-14)

is unlikely to land on any award lists, but if you want to win over some of your "tough nuts to crack" then read aloud one of the mini-biographies in this collection, put the book on the shelf, then watch the feeding frenzy that will combust spontaneously in your room. Bragg's recount of how some of the most famous people in history left this mortal coil would have sent shivers up the spine of my sweet, loving fourth-grade teacher Mrs. Blanchard. I doubt I would have been introduced to it had it been published in 1978, but I am sure I would have found it, read it under the covers at night, then passed it along to my friends. How They Croaked

is very informative, somewhat grotesque, and drips with sarcastic humor all at the same time. Consider this passage about the death of composer Beethoven:

During the next few weeks Beethoven went back to the hospital three more times to have his stomach drained. His doctor reinserted the hose into the same hole each time. And, no surprise, the hole got infected.

In addition to Beethoven, Bragg explores the lives and deaths of 18 other famous individuals including King Tut, Pocahontas, George Washington, Charles Darwin and Madame Curie. In her introduction, she lures readers in by warning us that "our toes will curl" and we should be thankful we live in a time of "painkillers, x-rays and 911." Kevin O'Malley is one of my all-time favorite illustrators, and his clever black and white portraits and side drawings enhance each tale. How They Croaked

is definitely not for the faint of heart, but I think many boys in grades 4-8 will devour this book like ravenous wolves.

I cannot think of a boy who has spent time in a classroom with me that did not enjoy nonfiction reading. When you think about adding books to your classroom library, don't forget to include nonfiction books. As long as the books center on the typical interests of the boys you know, they will dive right into them.