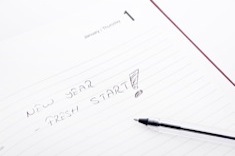 New Words for the New Year

The clean slate of January 1 refreshes our visions of our higher selves. The potential of the New Year gives us energy and inspires newness: new diets, new interests, new resolve. However, the energy surge that calls us to action can quickly morph into an energy drain of guilt, leaving us to wonder how to better harness the fleeting enthusiasm that comes with flipping our calendars to January.

Thinking about energy as a by-product of our perception of our reality is one way to begin to unravel this conundrum. When things feel as if they are not going well, there is a tendency to feel energy depleted, making it difficult to rally to accomplish the goals we set for ourselves. This, ironically, makes us feel as if things are not going well, and creates a self-perpetuating cycle. We think, If only things were going better, I’d be able to . . .

But what if we set different goals—goals that focus on increasing energy—and trust that, if we feel better and have more energy, we will take care of the things our higher self knows are important, such as getting in shape or reading for pleasure. This New Year, consider setting goals around intentionally buoying yourself by changing your language in ways that generate more energy. Below, we describe three, easy language changes that can plug a few common energy drains and serve as an indirect route to your “traditional” goals.

Whether our goal is to organize the classroom library, teach students to listen respectfully while others are speaking, or lose twenty pounds, when things don’t go as planned, we are inclined to describe the situation with finality, making statements such as these:

However, when we add the word yet to the same sentiments, the message changes dramatically:

In the first set of examples, the implication is that our reality is fixed. Things “are what they are,” and if they aren’t what we want them to be, we might as well give up, because the window of opportunity has closed. In the second set of examples, however, the implication is that we are in charge of our own reality. The message is clear: although we might not be where we want to be right now, we have the power to get there—a message that is hopeful and can inspire us to keep working toward our goal.

In Mindfulness, Ellen Langer discusses a study where two groups of people were asked to do the same task: rate cartoons.  When explaining the task to the first group, the researchers described it as “work,” and after completing the task, participants in this group described it as “boring” and said their minds wandered. The folks in the second group, however, had a very different experience. Most of them described the task as “enjoyable,” thus begging the question, How do two groups of people do the same task and perceive it so differently? As it turns out, the difference was subtle and simple. When the task was introduced to the second group, it was described as “play.”

I am going to get up early this morning to play with my lesson plans and look at what happened when students played with narrative writing.

Or try it in your personal life:

I need to play with the laundry so that I have something clean to wear to go to play tomorrow.

Words such as have to, need to, and should affect our psyche in ways similar to the word work. Our have-to‘s, need-to‘s, and shoulds tend to describe the tasks that weigh on us, those for which we may feel the least energy. They can even evoke negative emotions, such as resentment, dread, or guilt, which drain our energy even more. A simple way to shift our emotional orientation in a positive way is to lean toward gratitude by replacing have to, need to, and should with the words get to. Instead of saying, “I have to prepare for parent-teacher conferences,” try saying, “I get to prepare for parent-teacher conferences.” In the second example, the subtext is about the privilege of parent conferences, rather than about the burden.  Appreciation becomes a portal to living in the moment and happiness. You can take this language shift a step further by thinking about all the things you appreciate about meeting with parents, such as having a job or having the opportunity to support students by making a connection to their parents. Although shifting to appreciation can be difficult at first because noticing what we don’t appreciate in a given moment is well practiced for most of us, it gets easier, and appreciation is a worthwhile new habit for the New Year.

Kim Yaris and Jan Burkins are the writers and thinkers behind Burkins and Yaris — Think Tank for 21st Century Literacy, where their blog and their instructional resources have drawn a national audience and made them thought leaders in the field of literacy instruction. Their book Reading Wellness is available through Stenhouse Publishers. 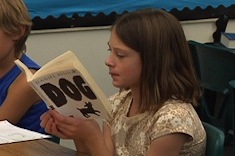 In the final installment of a two-part series, Gretchen Taylor explains how to help middle school readers set goals.

Jan Burkins and Kim Yaris explain how to slow down and enter lessons more mindfully. This is the first installment in a three-part series on mindfulness in classrooms.