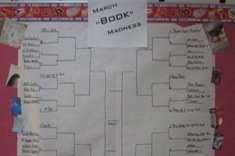 During the month of March, like many people in the United States, I am consumed by college basketball.  In my opinion the NCAA Basketball Championship is the greatest thing in the world of sports.  The tournament starts with 66 teams, and through a series of one-game match-ups teams are winnowed from the tournament.  In the end one team takes home the trophy.

One of the things in life I do love more than March Madness is reading great books. The amount of sleep I lose in March staying up to watch games between two teams I really don’t care about pales in comparison to the amount of sleep I can lose when I am in a reading flow.

So this spring I decided with the help of my class to combine two of my favorite things and have a battle of books that we called March Book Madness. This event didn’t get the national attention that the bigger March Madness gets, but in our room it was clearly the biggest thing going on for three full weeks. Every morning we anticipated who would win and move on to the next round.  We discussed, voted, cheered, moaned, and discussed a little more. Some of us began rooting for new books when our favorites were vanquished.

To be completely honest, this idea sprung from the School Library Journal’s “Battle of the Books.”  However, I figured 16 books reviewed and argued about by celebrity author judges couldn’t match the excitement of over 50 books getting judged by the biggest fans and harshest critics of books for kids — 4th grade students.

The books we included were all books that I had read aloud to the class this year plus books the class submitted. In order to submit a book, a student had to love the book so much he or she convinced somebody else from the class to read it. When submissions were done, I had 52 books to slot into a bracket.

To create the bracket I used a free create-your-own bracket website. Thankfully it had a 52-team option. I projected this blank bracket on my SMARTBoard and traced the image onto bulletin board paper. That was the easy part. The hard part was trying to seed the books. For example, I knew that I wasn’t going to put the crazy popular 39 Clues

against the even more popular Bigger than a Bread Box

in the first round. My system may not have been perfect, but I tried to spread the really popular books around the bracket. I wanted to have books in the final rounds to have been widely read in our room.  In our Elite 8 we had three books that had been read aloud and five books that over half of the class had read this year.  We also had a diversity of genres. There were two graphic novels, two realistic fiction novels, one fantasy novel, one historical fiction novel, one picture book and the hard to categorize The Invention of Hugo Cabret

Once the bracket was set and posted on our classroom wall, the buzz began. Each day we had one or two votes. Before each vote I would quickly summarize the gist of the story and answer questions from students who may not have read the book.  This was actually a hard job for me, because I was trying to be as impartial as possible. For example, when Powerless

(one of my new favorite books) came up for a vote I seriously tried to conceal my favoritism. In the few cases in which a book I have not read made the bracket, like 13 Gifts

, I would let a student take my role as summarizer. Then students would talk in pairs or threes about the qualities of each book and which book they thought was better.

After the discussions we voted. I decided to keep the voting process simple and secret. We closed our eyes and raised our hands for the book we chose. I knew I didn’t want to take the time to create ballots, but I wanted to make sure the kids felt safe in choosing their personal favorite in the matchup. By this point in the year, my class typically can be very opinionated about books. We have no problem sharing what we like and don’t like. I think this is a great thing, but it can lead to the more powerful personalities swaying their peers. I would announce the winner after the vote and record the vote count like a score on our bracket. In the end a surprise winner emerged. Sidekicks

by Dan Santat was champ.

When I think about what March Book Madness did for my class, nothing but positives float through my mind. I have narrowed my reflections done to four key ideas that have cemented the fact that I will continue to do this for the rest of my teaching career.

March Book Madness might not be for everyone, but my class thinks you should consider it. When we were done, I had them write a reflective letter to me about our book tournament. I will leave you with some of their comments:

“I want to do March Book Madness every year.  Can you tell the 5th grade teachers to do it?” — Caroline

“I loved it.  It was fun wondering who would win.” — Mikey

“You should do this every year.  It was awesome.” — Sarah

“I read three books I didn’t think I would because of MBM.” — Ilyas

“I wasn’t happy about my favorite not winning, but it was still great to vote on favorite books. I would love to do this again.” — Grace

I encourage you to give March Book Madness a chance. Who knows? You might end up having as much fun as we did.